Back on the goal trail with Peter Ward 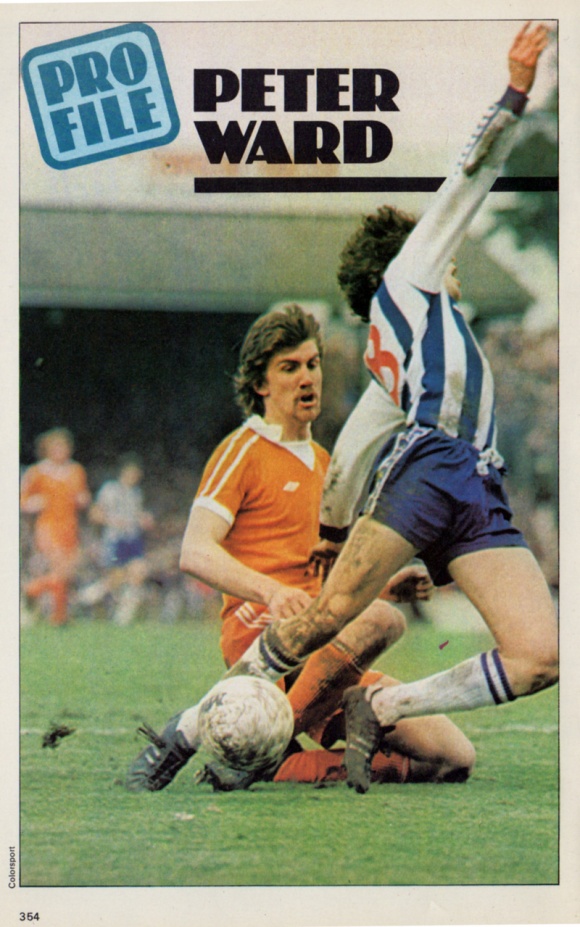 ‘I get clobbered every game,” says Brighton’s star striker Peter Ward. And here’s one time it was worth it. Ward wins a penalty from Blackpool last season.

Inside is a superb interview with Wardy, really capturing what it’s like being a renowned goalscorer and the extra attention he received:

‘It doesn’t matter who we’re playing against – I still get clobbered all the time. And they hit you hard. The only way to get back at them is to play well or, even better, just score.’

Now and again ‘Match of the Day’ deserts the First Division for highlights of the action from football’s ‘lower reaches’.
Sometimes it’s dreary but often it’s a delight – and the producer who took his cameras to Hove on 18 September I976 could hardly believe his luck.

Not only did the Third Division match produce the amazing scoreline of 7-2. It also made a star out of an unknown …a lad named Peter Ward.

One goal in Brighton’s crushing of York City made Saturday night viewers take note for the chat in the pub at Sunday lunchtime . …a goal scored by Ward.

Smoothly, effortlessly, Ward cut inside and danced past several defenders before slamming a right-foot shot high into the corner of the net.

It was clear to everyone that here was someone special – his control at speed, his ability to turn defenders and, above all, his precision finishing.

And there was expression in his play that made a mockery of the ‘fear element’ that had spread through every level of the game.

Yet there was a time when Ward himself was in danger of being a victim of the ‘too small’ syndrome.

‘I got no encouragement at all at school,’ says Peter. ‘Just before I left they came round asking everyone what they wanted to be.

‘When I said a footballer they laughingly said, “Oh no, you’re too small”. I believed them and ended up in a factory
as an apprentice fitter.’

His football was played in local parks until Burton Albion took his talent into the Premier Division of the Southern League. Little over a season later Brighton made the offer of full-time football.

‘After knowing what it’s like to clock in and out, I’d have signed for tuppence.’

A quiet start to his pro career might have been expected – certainly not the 36 goals he scored as Brighton scorched into the Second Division.

Almost inevitably the goals dried up a bit the following season and Brighton paid out over £200,000 for Teddy Maybank to take some of the load off Ward.

Success was not immediate. 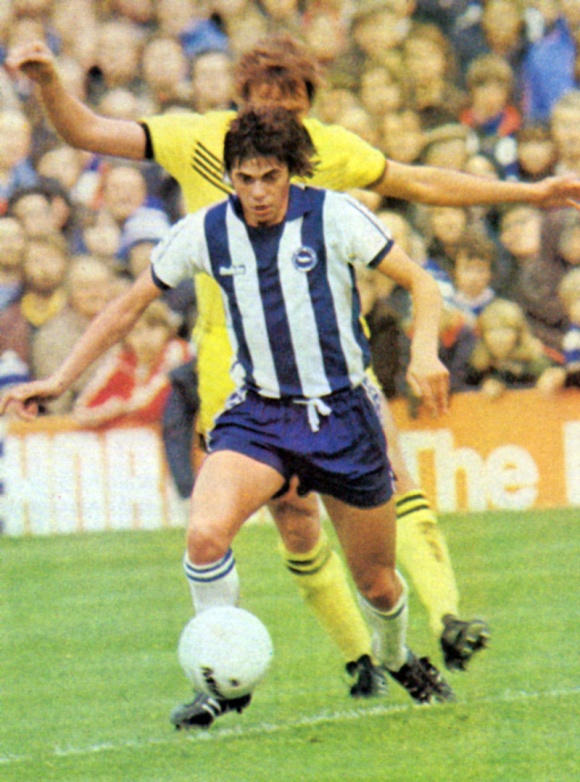 Brave as well as skilful. . .
Ward keeps close control despite the attentions of a defender who dwarfs him.

Ward says: ‘I’d played alongside Ian Mellor for a season and a half and we’d built up an understanding.

When they bought Ted to replace him we didn’t start off too well. I was going through a bad patch and he was trying to justify his fee.

‘But, all of a sudden, it just clicked, and we played really well together for four or five games. Then he was injured and had to have a cartilage operation.’ Brighton went straight back into the transfer market and Malcolm Poskett became Ward’s next striking partner.

These upheavals did not help Peter’s play and he finished the season with 17 goals – plenty for most players but well below the standard he had set himself.

Peter doesn’t mind the pressure. ‘I’m glad the fans expect more of me. It’s a challenge when they want you to do something out of the ordinary.’

He accepts the stick he takes every week, too.

‘It doesn’t matter who we’re playing. I still get clobbered all the time. They all hit you hard. The only way to get back at them is to play well or score.’ Peter remembers in detail the goals he scores, but he has no set plan for finding the net.

‘I like the ball played to my chest or feet, in and around the box. It’s pointless me trying to turn a defender on the half-way line – I can’t shoot from there!

‘I don’t know what goes through my mind when the ball’s coming to me. I’m just aware of the defence and the goal behind them. All I want to do is beat defenders until the goal is big enough to shoot at.’

Indefinable instinct gets him into scoring positions in crowded areas, but control counts just as much.

‘I’m always working on my close control. You can never be too good. I’m always trying to improve, always sharpening up.’ After training you’ll see him practising shots on the turn with an apprentice marking him.

‘It helped me get my head down a bit.’

All the Brighton heads went down a bit when Spurs pipped them for promotion on goal difference last season.

‘When the whistle went at the end of our final match against Blackpool we thought we’d done it.’

But they hadn’t. Disappointment was acute.

‘I’ve never played in the First Division, so it’s something I’ve got to do. It’s no good looking back when I’m 35 and saying, Oh well, I was good, I made a bit of money.’ Amazing to think that Burton Albion got £4,500 for the player that Brighton manager Alan Mullery considers ‘priceless’. Peter himself concedes: ‘They’ll make a profit if they sell me, won’t they?’

In the feature, there is also a stunning sequence of Ward on the rampage, capturing the close-control and inhibited running that made his so exciting to watch in the late 1970s: 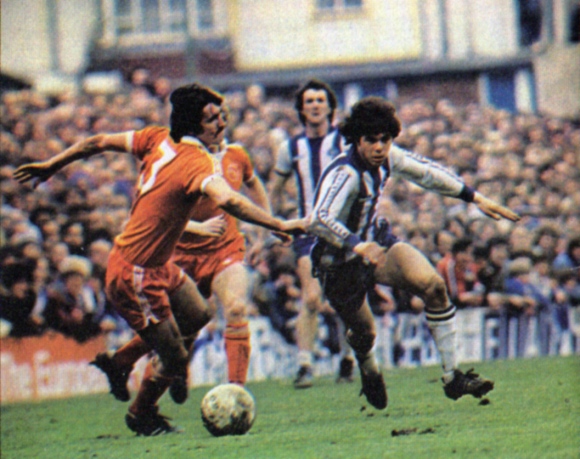 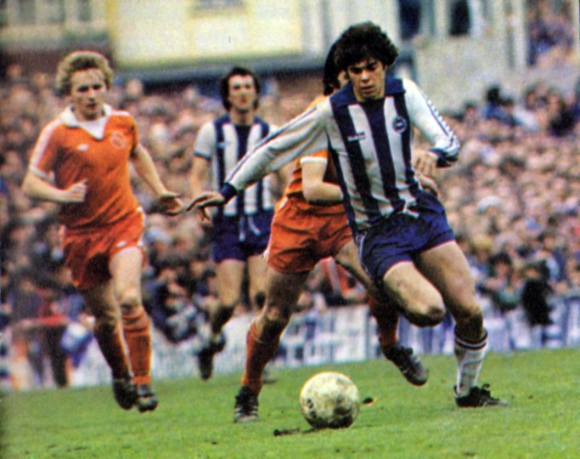 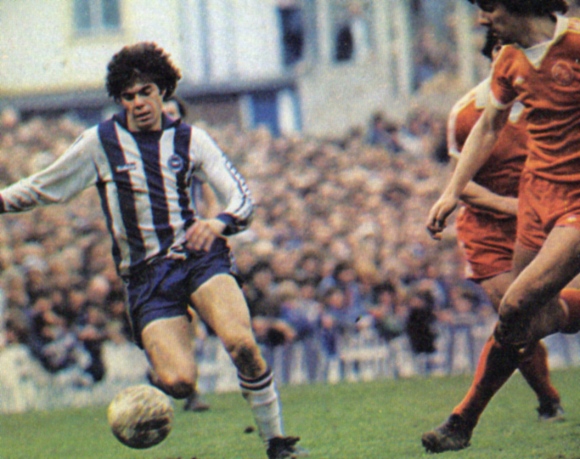 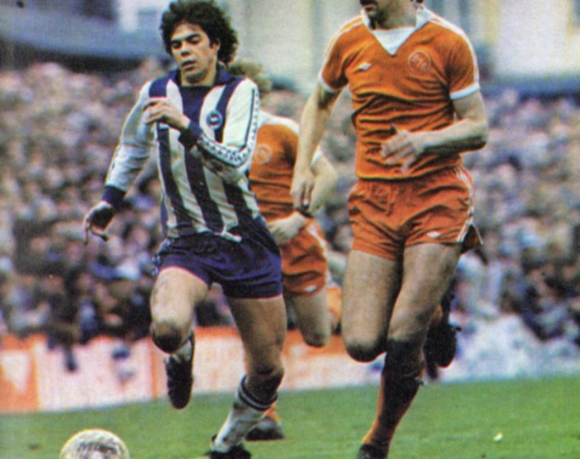