As promised, there will be occasional posts to The Goldstone Wrap, and here’s one of them… 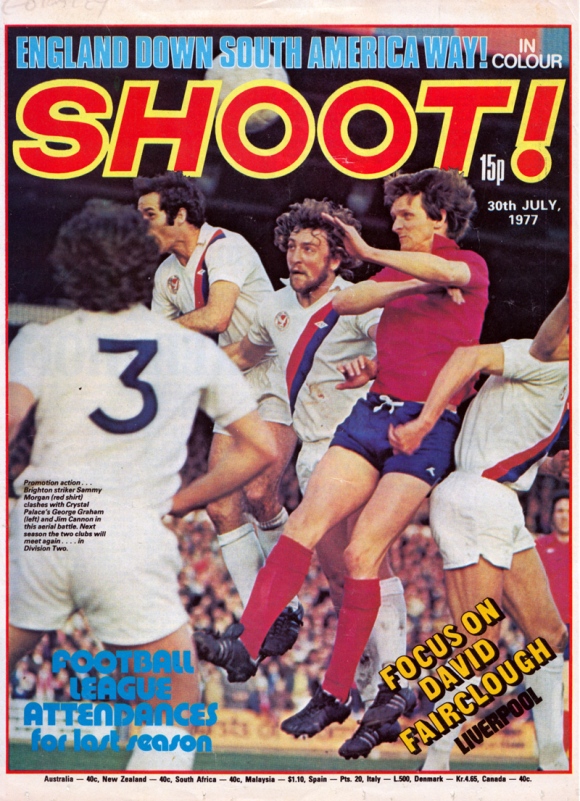 It would be unthinkable for the leading football magazine in Britain nowadays to feature League One action on its front cover. However, in the 1970s, with more even coverage of all the different tiers, we were treated to this shot of Crystal Palace v Brighton from the Third Division in 1976/77. The caption reads:

Hard as nails, Morgan was a Northern Ireland striker in his time with Port Vale and Aston Villa, and joining Brighton in December 1975 for £30,000, where he added two further caps. Memorably, his two goals in February 1976 helped Albion to a splendid 2-0 victory over Crystal Palace at the Goldstone.

The following season, with the blossoming of the Ward and Mellor show, Morgan’s outings were strictly limited to the bench on all but two occasions. Nevertheless, as Tim Carder and Roger Harris’ ‘Albion A-Z’ book recounts:

Perhaps his most memorable performance was at Crystal Palace in an FA Cup replay when he came on for the injured Andy Rollings and gave a heroic display at centre-half.

The photo above is probably taken from Albion’s 3-1 defeat at Selhurst Park in March 1977, a game when Morgan came off the bench to replace Steve Piper.

The month after the publication of this edition of Shoot! magazine, Morgan departed for Cambridge United, making 37 appearances in his only season to help the ‘U’s gain promotion into the Second Division for the first time. He then had spells in the Netherlands and the USA before becoming a school teacher in Great Yarmouth in 1980.