According to Tim Carder and Roger Harris’ ‘Seagulls!’ book, discussing the 1983/84 season:

An anonymous supporter took out a four-page advert in the Evening Argus on 2 September, appealing for more support and, in particular, for more vocal support; he wanted the game the following day to be a fun afternoon for everyone. He should not have wasted his money – it was the Chelsea match!’

Thirty years to the day, it certainly seemed like a match to savour, the first ever Football League encounter between recent FA Cup Finalists Brighton against a resurgent Chelsea, with rising stars such as Kerry Dixon, David Speedie, Pat Nevin, Colin Pates and Nigel Spackman firing all cylinders alongside very experienced players such as John Hollins and Colin Lee (below): 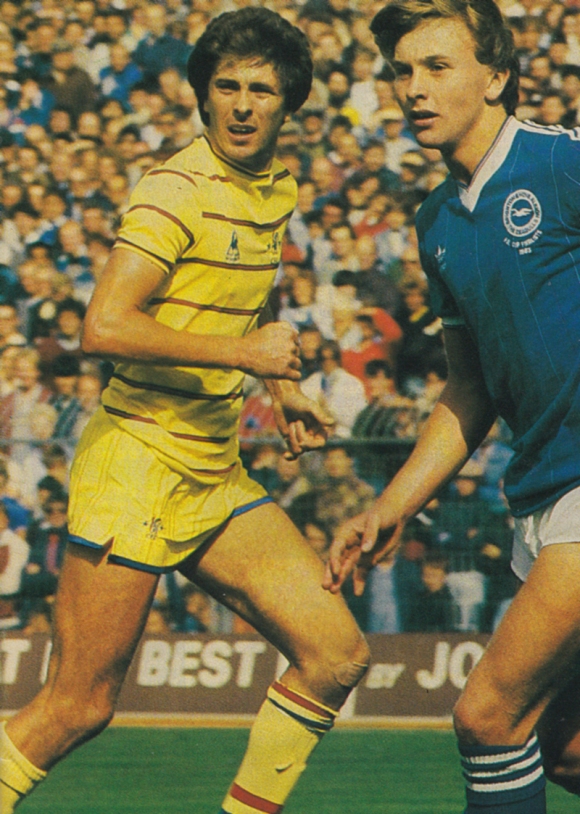 The Blues had trounced Derby County 5-0 on the opening day of the season. However, the spectre of football hooliganism was to mar the Albion v Chelsea game. As authors Carder and Harris went on to say:

Friday night saw running battles between Chelsea followers, police and local youths; and the game was played in a brooding atmosphere before 20,874 people, 8,000 of them from London.

Played out in the sunshine, the highlight of the match for Brighton supporters was Alan Young’s spectacular banana shot after 76 minutes. Reporting in the Sunday Mirror, Pat Garrow wrote:

Chelsea were quickly in their stride and when the hapless Steve Foster handled in the box, Dixon gave the visitors the lead.

…a shaken Brighton stormed back. It started when Jimmy Case took a free kick that Niedzwiecki failed to hold and Young did the rest with a spectacular overhead kick.

Brighton’s joy was short-lived. A minute later Chelsea scored the winner. This time it was the consistent Clive Walker who squared the ball almost from the byeline across goal.

‘Keeper Digweed could only get his left hand to it and he pulled it down for Dixon to volley into the net. 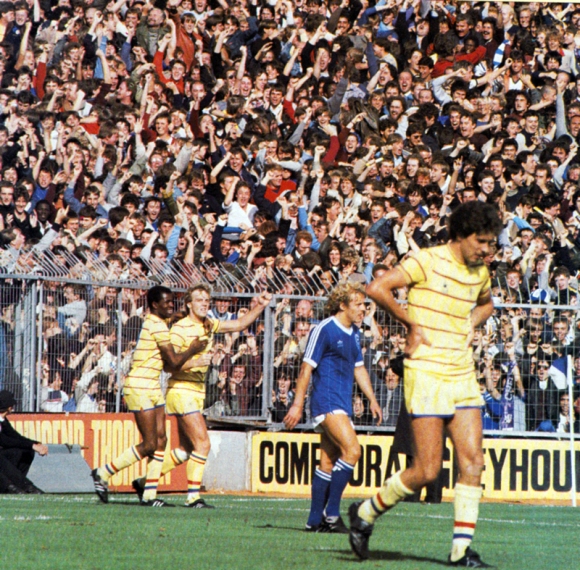 The game was far from rough but referee Ken Baker kept bringing out his notebook.

Indeed, he showed the red card to one of the Chelsea players, which surprisingly drew fierce criticism from Brighton boss Jimmy Melia who said: “The referee was diabolical. The decision to send Canoville off for retaliation was terrible.”

But the drama did not end there. As Carder and Harris explained:

Chelsea supporters infiltrated all parts of the ground, and at the final whistle the hooligans invaded the pitch from all unfenced areas to launch a vicious attack on the hopelessly outnumbered police. By the time a police horse had managed to clear the pitch, seven constables were injured and the north goal was broken. It was the worst outbreak of violence ever seen at the Goldstone. 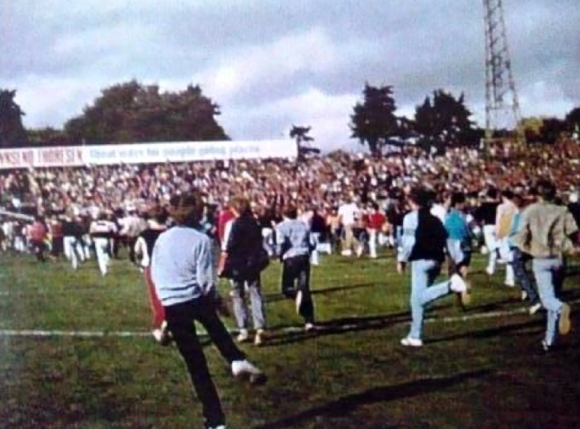 Chelsea’s left-back Chris Hutchings even got in on the act, and was charged with threatening and abusive behaviour for swearing at police trying to clear the pitch. According to an article by Spencer Vignes in the Brighton v Sheffield Wednesday programme in 2012/13, it started when he applauded the visiting support after the match, an act interpreted by a policeman as inciting further crowd trouble. As Hutchings said:

“All I did was clap them and this copper comes over and says ‘Get off the pitch at me.’ I said ‘No’ so he said ‘get off the pitch’ again and tried to help me on my way, and I told him to ‘Fuck off’ and ran down the tunnel. Next thing I know he’s nicking me!’

By the time the case was heard at Hove Magistrates Court, Chris Hutchings the Chelsea player had become an Albion player, signing for the Seagulls in a £50,000 deal in November 1983. I’m sure his signing on fee covered the £250 fine he received!

With Hutchings a fixture at left-back, Brighton were eager to avenge the defeat in the corresponding fixture at Stamford Bridge on the last day of 1983. It was not to be as the sharpshooting David Speedie grabbed the winner to complete the League double over the Albion.

One thought on “Black day at the Goldstone Ground: Brighton v Chelsea 1983”