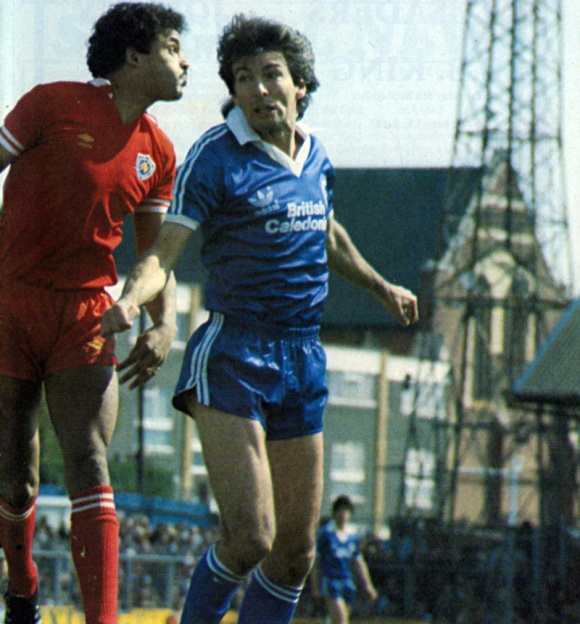 Here’s a familiar face for Leicester boss Jock Wallace… Gordon Smith, his former Rangers player, in action against Larry May

About a year before joining the Seagulls, Leicester striker Alan Young did much to help Brighton to safety by getting sent-off in the fixture on this day in 1981. Here’s how Nigel Clarke reported it for the Daily Mirror:

Brighton climbed out of the bottom three with this win, edging above Coventry on goal difference.

But Leicester, who had two men sent off in this desperate relegation battle, look to be heading straight back to the Second Division.

They finished with nine men after having Alan Young and scorer Kevin MacDonald dismissed.

Young went in the 40th minute for a foul on Steve Foster after being earlier booked for clattering into goalkeeper Graham Moseley standing for the concussed Perry Dlgweed.

MacDonald, also booked earlier, got his marching orders in the 75th minute for deliberate handball.

But Leicester manager Jock Wallace said defiantly: “There’s no surrender. We’re not dead yet. We’re breathing, walking and talking. The second sending off was the killer. We were doing all right with ten men and Brighton looked very tired.”

Brighton boss Alan Mullery said: “It’s going to be difficult for Leicester now. I just wish the season had ended today.But the pressure la still on us. We needed four points over Easter to give ourselves a chance, but it’s nice to be out of the bottom three. It wasn’t much of a match in terms of quality. but it was always tense and very exciting.”

Against all the odds Leicester took the lead four minutes after Young’s dismissal. MacDonald flicked a back header past Moseley from Steve Lynex’s cross.

But Brighton suddenly produced an inspired spell between the 51st and 57th minute.

It was enough to win the game and earn the kind of support that Mullery had demanded. 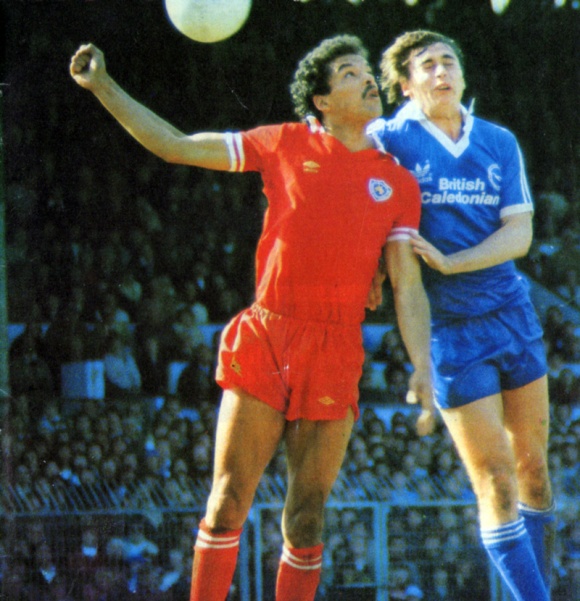 First Andy Ritchie checked, turned then lifted a left-foot cross that Michael Robinson took hungrily in the air for his 21st goal of the season.

Four minutes later Albion took the lead with a goal that was good eoough to grace Wembley.

John Gregory began it with a clever back-heel that set free Brian Horton. He picked out Robinson who turned the ball back to-Gary Williams.

He crossed quickly and there was Gregory, who scored two at Crystal Palace on Saturday, on target again with a magnificent header.

Robinson nearly made it three two minutes later as Albion took control of Leicester’s depleted forces and ran the game as they liked.

This crucial put the Seagulls just above the drop zone with 31 points from 40 matches. One place below, Coventry also had 31 points but one match in hand. The Sky Blues made full use of this, winning against Middlesbrough and Southampton before a draw at Nottingham Forest took them well clear of the relegation zone into 15th spot. Leicester’s response to their defeat by the Seagulls were two wins in two, against Birmingham and fellow relegation-strugglers Norwich, but it was not enough to save them and they finished second from bottom.

As for Brighton, Alan Mullery’s side built on those two wins with a last-gasp victory at Sunderland to set up a grand finish with with Leeds United at the Goldstone. Suddenly, after a campaign of struggle, everything was going right.