The image has been colourised superbly by George Chivers. One of the most striking aspects of this team photo is the red away kit, based on the blue home version that was used for much of the 1960s. When I first saw the black and white original, I assumed it was the home shirt with blue body and white sleeves, but on closer inspection, the tone looks different from the blue on the stripes.

According to North Stand Chat forum user El Punal: “The only time that I can remember the Albion ‘Arsenal’ kit was the 4th round FA cup tie in 1967 against Chelsea. Even though it was a home tie both teams had to change. Chelsea played in white shirts and blue shorts.”

Another NSCer, going by the name Freddie Goodwin, confirms the colour, as seen in an away match with Bristol Rovers in 1971/72, who played in plain blue shirts at the time: “We did play in an ‘Arsenal’ kit and very smart it was too. I was also at that Bristol Rovers game at Eastville. It was a very northern division with no London teams and was one of only three away games I could manage, the others being Bournemouth & Villa. The picture shows John Napier up (or defending) a corner. It was an entertaining game but Willie Irvine had a mare, until scoring in the last min! We scored so many last minute goals that season and won 12 away.” 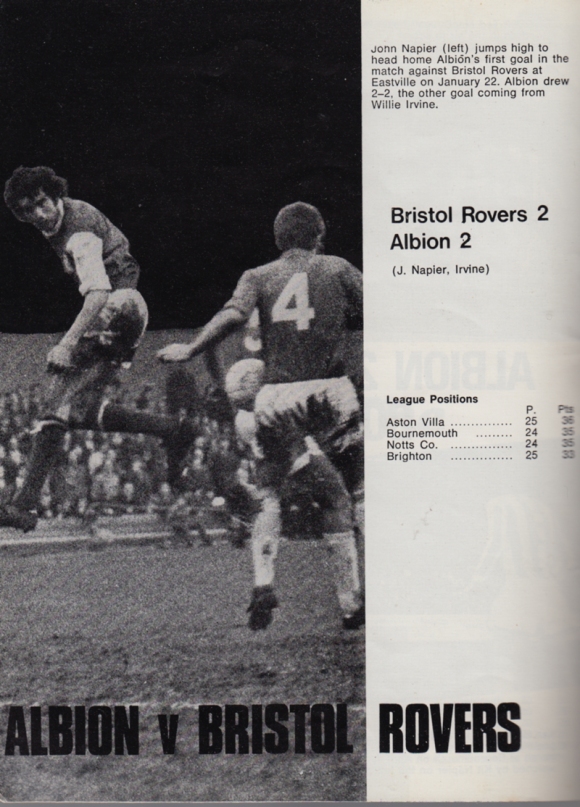 One thought on “Arsenal in disguise”