Here is mascot Gavin McLean, then 12 years old, posing with new Brighton striker Justin Fashanu on the opening day of the 1985/86 season, before the 2-2 draw with Grimsby Town at the Goldstone in August: 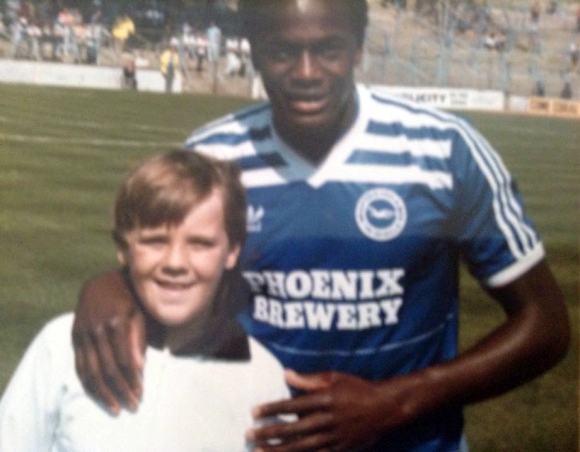 Fash had a fine spell with Notts County in 1984/85, leading to considerable interest from the likes of Manchester City, Norwich, Chelsea, Birmingham, Oxford and Oldham. In Jim Read’s superb biography of Justin Fashanu, he provides a vivid anecdote:

Also interested in Justin was the manager of another Second Division team, Chris Cattlin of Brighton & Hove Albion. Feeling he might be a difficult player to manage, Cattlin decided to invite Justin to stay at his house for four days so they could get to know each other. They obviously hit it off and the transfer was agreed.

Catlin explained: “Justin had a reputation of being a bit of a problem player with his other clubs but that is all in the past. In my dealings with him I’ve found him to be a smashing person and the sort of player our supporters will take to.’ He told the Evening Argus that Justin was ‘a dedicated player who has been asleep for a couple of years’, adding ‘I’m sure, with us, he will bring his talents to fruition’. For his part, Justin told The Times: ‘I only took this step after a good deal of thought and prayer. I am convinced Chris Cattlin can get the very best out of me.’ He described the move as the most important of his career. He must have felt it was his last chance to regain the form he had shown at Norwich and in his first few months at Notts County.

He signed in June 1985 for a fee of £115,000 given a generous three year contract, reported to be around £45,000 a year. He had passed his medical but there was an exclusion clause on his troublesome right knee. It would only be covered by insurance after he played 12 consecutive League games.

There was some lingering ill-will from supporters over various incidents when he had played against them including the injury to Jeff Clarke the previous season. When still at Norwich, he had broken the nose of Brighton’s defender, Andy Rollings, who was then sent off after swinging a punch at him.

Dismissing the broken nose as arising from an accidental clash of heads, Justin claimed: ‘I think I have become more subfie in my game. I would really hurt people in the past but that is all behind me, now.’ But, as one Brighton supporter put it: ‘He was the kind of player you couldn’t stand because you thought he was dirty, then he comes to play for you and you think he’s brilliant.’