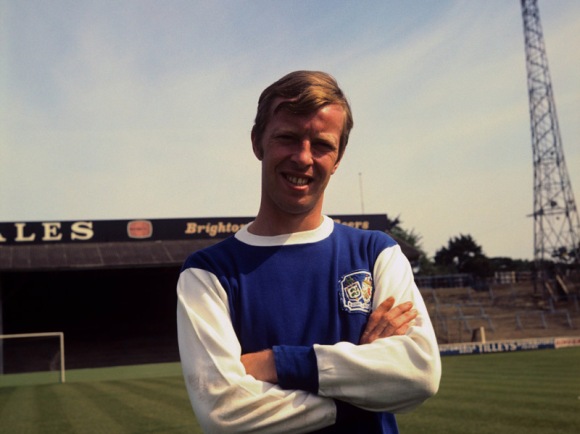 From Goal Magazine article ‘North moves in on the South Coast’:

Brighton is one of the most cosmopolitan neighbourhoods in the British Isles, so perhaps it is appropriate that they have a man from the North as captain of their Third Division Football side.

‘Nobby” Lawton is the thoughtful new brain, signed from Preston North End last year, to succeed the industrious Dave Turner, as skipper on Brighton’s sea front. Nobby is the ideal link-man, much appreciated by new manager Freddie Goodwin. Both of douse, are ex-Manchester United stars.

His display for Preston in the 1964 Cup Final brought comparisons with Eddie Colman, one of the victims of the air disaster and Nobby’s own personal hero. His natural wing-half foraging was responsible for many Preston achievements, although he is happier in the scheming position up front. At inside-left, he has settled down into his former position at Brighton with relish and is an ideal link with the attacking probes of Turner and the sharp shooting of Napier or Livesey.

His Brighton form at first was hampered by a knee injury, but it has made him all the more determined to prove his worth before a southern audience. The Brighton fans are not quite so loyal as in Manchester and Preston – or so numerous – but they know a talented worker and schemer when they see one. Nobby Lawton has fitted into the Brighton scheme, especially as more spirit and stamina needs to be installed if they are ever to get into a higher division.

Nobby Lawton is always ready to give one hundred per cent in the interests of the club.

His family are happily settled into a Shoreham bungalow and he is one of the most contented northerners to settle into a southern club.

That 21-day suspension handed out to Nobby last week means he misses the Cup game which is punishment in itself. Nobby will be have to be patient until the weekend before Christmas. It’s a lesson that he will painfully learn.

Anyone know what this 21-day suspension was about?

By the time he joined Brighton, he had little pace, but could still ghost past players. Using his vast experience, Lawton was available to receive a passes, even in the most crowded of midfields.

He is remembered by some Brighton fans for scoring an incredible volley against Shrewsbury from the half-line in February 1969 when future Albion keeper John Phillips’ kick-out was returned with interest. After losing his place under Pat Saward in 1970/71, Nobby requested a transfer. He eventually joined Lincoln in February 1971 before retiring the following year.