As a rising star in the media, the ever so smooth Des Lynam was getting lots of gigs. Not only did he commentate for the BBC on the Brighton v West Bromwich Albion match in August 1980, the ubiquitous Albion fan and Grandstand presenter also penned an article for the match day programme as a guest writer. In it, he recalled striker Ian Mellor, whose interplay with Peter Ward played such a pivotal part of the 1976/77 promotion season:

One of the most pleasant aspects of working with the ‘Match of the Day’ team, is the chance it gives one, to meet old friends.

A fortnight ago, while reporting the Second Division match between Sheffield Wednesday and Newcastle United, I bumped into a very old friend of Brighton & Hove Albion, a man who I feel had a remarkable bearing on the club’s current unprecedented successful run, Ian Mellor – ‘Spider’ to his mates, now playing for Wednesday.

Except for the very newest Brighton supporters among you, I am sure that nearly all will have a great regard for Ian. it was in Brighton’s promotion season from Division Three that Peter Ward broke the club’s scoring record, very much aided and abetted by Mellor who also found the time and skill to notch 12 League goals for himself.

It was the beginning of the best spell in the club’s history and Mellor’s part in ‘assisting’ Peter, who, after all, was playing in his first full season, should never be underestimated.

Ian Mellor turned professional in December 1969, when he was 19, with Manchester City. Malcolm Allison had not so long before, taken City to the League title – and Mellor joined one of the most elite groups of players in the country. Lee, Summerbee, Bell, Marsh and Young were just some of the star names there at the time. In fact Ian feels it was the success of the elegant Young, scorer of the winning goal in the 1969 Cup Final against Leicester, that influenced him joining City. Ian, like Nell, is over six feet tall, but slight and wiry, not the archetype football build at all. City, however were prepared to give Ian a chance, when other clubs were thinking that he didn’t quite look the part. As Ian put it, ‘One tall skinny lad had done the trick for them, and they felt I could do the same.’

Here is Mellor scoring for Manchester City against Arsenal in 1971/72:

Ian had a good run in the City first team, but subsequently joined Norwich City. There, after Ron Saunders departed however, things didn’t work out so well and he was delighted when Brian Clough and Peter Taylor brought him to Brighton, then of course in Division Three, and not so very far away, at one stage, from Division Four.

He remembers his first match for the club avidly. Old rivals Crystal Palace, whose success in recent years has matched Albion’s, were the opponents at the Goldstone, 25,000 fans were there, and as Ian relates it: ‘Palace were running all over us. It was remarkable that they weren’t about three goals up. Then in the second-half I got the ball some 35 yards out, went on a run, beat a couple of players and scored probably the most memorable goal of my life.’

Albion won 1-0, and if justice wasn’t exactly served by the scoreline, Mellor himself could not have had a better introduction to the south coast fans.

Well, the promotion season from Division Three was a ‘heady’ one and Ian recalls that he has never known a team spirit like it anywhere, although he feels that Sheffield Wednesday are getting close to it. ‘The Goldstone fans were so good to us,’ he remembers, ‘and that year was the happiest in my playing career.’ 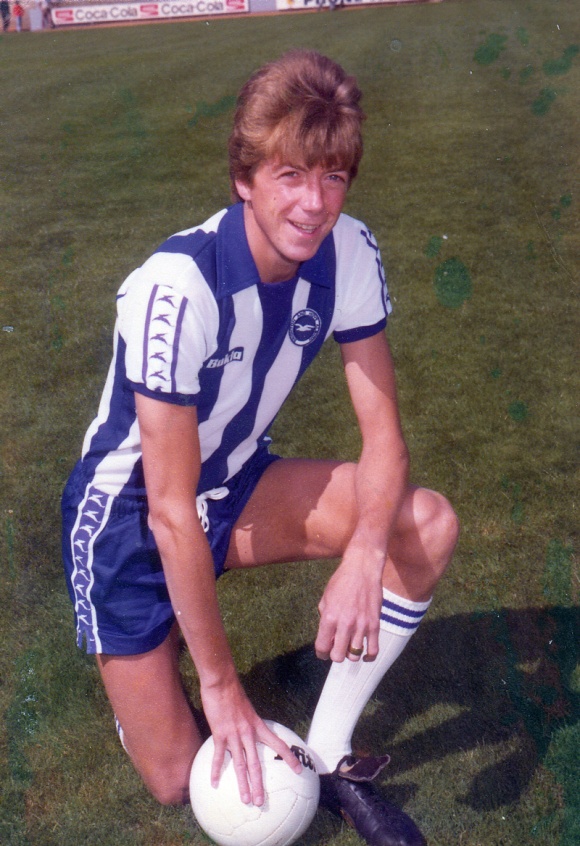 Subsequently came the disappointment of being left out of Brighton’s Division Two team, following the signing of Teddy Maybank. “I honestly felt that Teddy was not a better player than me and I was hurt’. But magnaminously, Ian also admits that the manager lives or dies by his decisions and team selection and he bears absolutely no grudge at all against either Alan Mullery (‘His record is second to none’), or Mike Bamber (‘You won’t find a more direct, honest, or knowledgeable club chairman in the game’).

In fact Ian could have stayed at Brighton and who knows, may well have worked his way back into the first team.

However, he decided to take up the offer of first team football with Chester. ‘The other reason I went back North was because I felt that if there were only a couple of playing years left, then both myself and my wife Sue would like to spend them near to our families and it would also give our parents a chance to get to know our children, Simon (now five and born at the Sussex County Hospital) and Louise (now three and born at Southlands).’

It seems to me to be no coincidence at all, that while Mellor played at Chester, a young forward called Ian Edwards, now with Wrexham and a full Welsh International began to light fires in Division Three. And nowadays, he’s at it again. Last season, Terry Curran knocked home 25 goals for Sheffield Wednesday with Ian playing alongside him as they won promotion to Division Two, and Ian also found time to slot in 11 for himself.

While Ian Mellor may not be one of the outstanding stars of League football, he’ll perhaps be recalled by the fans of those clubs with whom he’s played as more of a star-maker.

I know the Goldstone fans will remember with affection – The Spider touch.

Mellor subsequently joined Bradford City on a free transfer in May 1982, before winding down his career with Tsun Wan (Hong Kong), Worksop, Matlock Town and Gainsborough.