Smoke bombs in draw with Palace

In October 1976, Brighton drew 1-1 with Crystal Palace in Division Three at the Goldstone. It was the first of Albion’s first five clashes with the Eagles that season. This match report is from John Pyke: 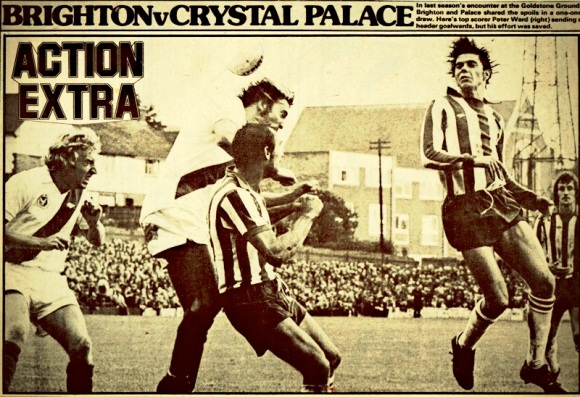 Brighton manager Alan Mullery was far from happy after his high-flying team let a point slip to old rivals Palace.

“We should have won: we had a lot more chances” he said.

And he blamed Albion’s lost impetus on two smoke bombs thrown onto the pitch in the second half.

They held up play for a couple of minutes – “and the game went dead after that,” complained Mullery.

But a crowd of 27,059 obviously enjoyed a duel that was a credit to the Third Division.

Brighton striker Peter Ward, rapidly becoming one of the hottest properties in the lower divisions, was a constant menace to Palace.

This $4,000 bargain from Burton Albion has plenty of skill and is always involved.

Brighton had by far the better half with Ian Mellor, Brian Horton and Ward prominent in their flowing movements. But they missed the contructive skills of the injured Welsh international Peter O’Sullivan.

Palace ‘keeper Paul Hammond made several fine saves and one real sizzler – when he shot rund the post.

It must have been a bit of a shock to Albion when Palace took the lead in the first minute of the second half. Dave Swindlehurst’s pass set up the chance and Jim Cannon shot hard and low past Peter Grummitt in the Brighton goal.

But it brought swift response from Brighton and six minutes later they were level from a move that started with a Dennis Burnett free-kick to Harry Wilson.

Wilson’s centre was flicked on by the busy Ward, and ‘Keeper Hammond could only push the ball into the path of defender Ken Sansom, who put it into his own net.

It was bad luck for Sansom who had defended strongly.

Palace played well as a team, and manager Terry Venables was well satisfied with the point.

Barry Silkman, drafted in to replace the now departed Peter Taylor, did not get much chance to shine. He was injured in the second half and replaced by Phil Holder.

Mullery could not help joking afterwards when he said: “I wonder if those smoke bombs were a move by Venners!”

But the last laugh was nearly on Brighton. In the closing stages Swindlehurst broke through and Grummitt had to produce the save of the day to tip his fierce drive over the bar.