I found this fascinating book in a second-hand shop years ago for just 99p. Published in 1997, and written by Jim Drewett and Alex Leith:

It’s a compilation of the best ever 100 football matches. As the back cover says:

“Hundreds of football stars from Sir Stanley Matthews, Gordon Banks and Glenn Hoddle to Steve Ogrozovic, Bob Wilson and Sepp Blatter voted for their favourite games of all time.”

It’s a stirring synopsis of some quite marvellous matches from football history. From England’s 3-6 humbling by Hungary in 1953, Brazil 4-1 Italy in 1970, to Charlton beating Huddersfield 7-6 in 1957. Others include Second Division Watford responding to a 4-0 defeat in the first leg of a League Cup tie against Southampton by thrashing the First Division side 7-1 in the return leg in 1980. Oh, and Crystal Palace 4-3 Liverpool in 1990.

Besides these highly appealing inclusions (even the Palace one), for Seagulls fans, there was added interest as in his introduction, Jim Drewett stated:

The inevitable British bias meant Brighton and Hove Albion looked like making an astonishing three appearances in the top one hundred (which has more to do with Alan Mullery’s choices than my co-author’s loyalties, honest!)

Brighton’s 3-2 victory over Sheffield Wednesday at the Goldstone Ground in 1976/77 made it in at number 67 in the book’s list. It was a result which guaranteed promotion from Division Three. Drewett’s co-author Alex Leith wrote:

Peter Ward was the darling of the Brighton fans in the 1976/7, and a quick burst of acceleration and a lethal shot made him the most feared striker in the division. Every time he got the ball he looked like scoring, which he did thirty-six times that season. But he nearly blew it for Brighton in this vital end-of-season match.

Ward was backed by a gutsy team, with Ian ‘Spider’ Mellor alongside him up front, Brian ‘Nobby’ Horton running midfield, and Irish international Peter O’Sullivan on the flank. But Jack Charlton’s Wednesday, in seventh position, did their best to spoil the party on the night, scoring in the first minute, and holding out to go into the interval 1-0 up. Just after the restart the nervous crowd could afford to relax slightly when Brighton were awarded a penalty, and Ward stepped up to take it. Everyone was confident. He was deadly in the box… until he missed. But Ward made amends with a fifty-seventh minute equaliser, and on seventy-one minutes he won another penalty for Brighton. A season’s toil rested on one kick.

Skipper Brian Horton took it this time, and made no mistake.

Local boy Steve Piper slammed home a third goal four minutes from time which meant that Wednesday’s second goal, scored in the last minutes, served only to add to the tension. 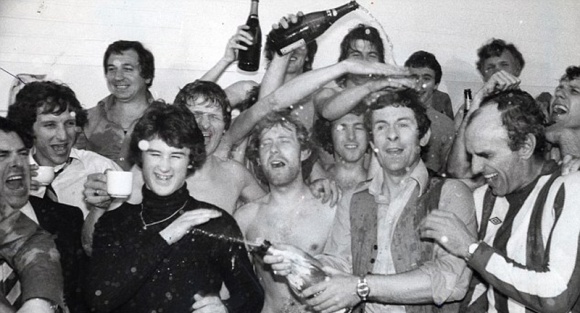 The referee’s final whistle signalled a celebratory crowd invasion, and Brighton were on a roll that eventually took them to the First Division and the FA Cup Final.

A cracking piece, and it’s followed by the 1983 FA Cup Final coming in at number 92 and the Newcastle v Brighton match in 1979 featuring at number 97. That last game must have been of particular interest to Alex Leith as in the author notes in this book he is described as:

Born in Newcastle and brought up just outside Brighton, which means his heart is split in two between United and Albion. He became a sports journalist after the lure of the lira saw him spend four seasons in Italy.

Purely by fluke, I was in contact with Alex on Twitter and realised he was one of the authors of this book I had read. I asked him his thoughts on putting together ‘It Was Magic’, sixteen years on:

Difficult book to write! We did a survey of 100s of people in the game. It was before the internet was a useful research tool, so we relied on books and word of mouth and programmes and suchlike. Labour of love. An Albion bias because of the people we asked. Mullers etc. Got interviewed on Radio 5 by John Inverdale but it got cut short because it was the day Dolly the Sheep was announced!

Alex is now editor of Viva Brighton which has done some superb interviews with some Albion greats from yesteryear such as Brian Powney, Peter Ward, Alan Mullery and Brian Horton.