Looking for all the world like he’s dressed in a set of pyjamas, here’s a rather startled-looking Perry Digweed, second from left, showing off his Admiral England clobber along with fellow Fulham lads Mark Lovell, Tony Maloney and Tony Gale. While Brighton striker Peter Ward was banging in a famous hat-trick for England Under-21s against their Norwegian counterparts at the Goldstone around this time in late 1977, Digweed had played in the FA Youth team against Norway at Craven Cottage. The young keeper ended up joining the Albion three seasons later in a £150,000 deal, an incredible fee for a teenage reserve goalie. Nevertheless, he repaid the faith, serving twelve years with the club.

The photo above is taken from the Fulham v Brighton match on Wednesday 28th December 1977:

The programme has some nice tidbits, such as what a ‘TV Video-set’ for rental looked like in 1977, some colour photography of recent matches (rare at this time) and a half-time quiz asking which two former Fulham players have managed Brighton (Barry Lloyd and Micky Adams can now be added to the answers of Archie Macaulay and Alan Mullery). Some words and photos also shed some light on the lives of the Lilywhites’ assistant manager Ken Craggs and young apprentice professional Tommy Mason, 17, before they eventually arrived at the Goldstone Ground.

Unsurprisingly, there is a warm welcome offered to the Brighton boss:

The name of Alan Mullery is something of a legend here at Craven Cottage – and it was a sad moment both for Fulham and for English football when he decided to quit the playing side of the game at the end of the 1975-76 season.

It is rather prescient that the piece finishes:

One of Mullery’s biggest assets – and some say his faults – is single-mindedness. But he’s just single-minded enough to get Brighton into the First Division – and good luck to him if he does it.

Indeed he was. The point about being single-minded is particularly apt given that recollections of this quality of Mullery’s that led to his appointment as Albion boss in 1976. Brighton chairman Mike Bamber had been asleep, dreaming of the time the then Fulham midfielder had struck team-mate Jimmy Dunne in a Second Division match with Albion in January 1973. (Yes, because that’s what we all dream about when we go to sleep!) His wife, Jean Bamber, though, was rather startled when he woke her up by announcing Mullery’s name, declaring ‘that’s who we’ll get as the next manager.’ As Mullery wrote in his autobiography in 1985:

Fulham had been winning 2-0 when our centre-half Paul Went was concussed in a collision with Brighton’s centre-forward Ken Beamish. I told Dunne to change his role in the team until we could get Went examined at half-time, but he ignored the instruction and within minutes a ball was played over the head of a wobbly Went and Beamish scored. I argued with Dunne. He told me that Beamish wasn’t his man and so I hit him hard on the chin. Brighton did the same a minute later only this time goalkeeper Peter Mellor made a great save and I had another go at Dunne. The argument continued in the tunnel at half-time and I smacked him a third time, until at last he saw sense and we eventually ran out 5-1 winners.

Hitting a team-mate is something I’m not very proud of, but it was done in the heat of the moment, and that first punch got me the manager’s job at Brighton. Bamber felt that if I could hit a member of my own team, nothing would stand in my way. ‘He must be a winner.’ he added as his startled wife tried to go back to sleep.

Mullery certainly proved a success as manager at the Goldstone Ground and wasn’t afraid to pay big to enhance his squad. Starting his tendency of paying astronomical prices for Fulham players, that continued with Digweed, the Brighton boss had completed the £238,000 signing of Teddy Maybank from Craven Cottage the previous month. With the transfer being too soon to be dismissed as overly expensive, the match programme is optimistic about the striker prospects: ‘Teddy immediately started to repay Alan Mullery’s faith in him by scoring in his first two games.’

He also scored a consolation in this fixture from December 1977 against his former side. Unfortunately for him, though, the Seagulls went down 2-1. 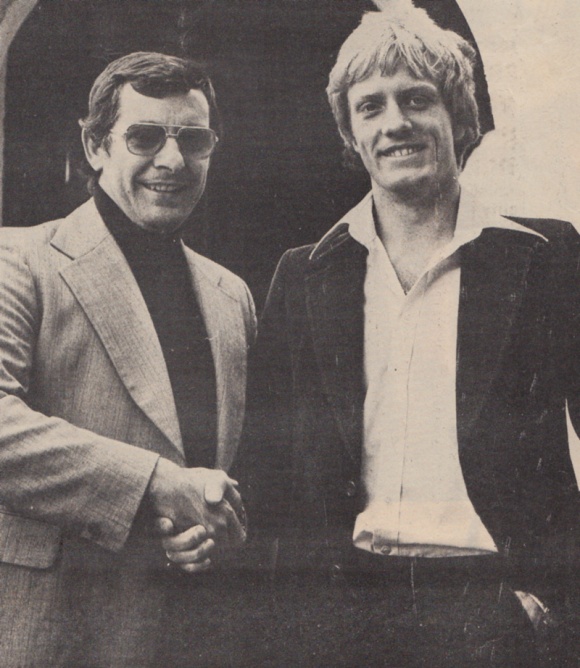