Today, I am very pleased to let you know of a big website update that I’m putting online.

As you may know, The Goldstone Wrap is a blog that is part of Seagulls TV, a Brighton & Hove Albion retro site that I started off three years ago to archive the video footage I had of the glory years of 1976 to 1983. Since then, the site has expanded to include team photos, action shots, results and player profiles for each season. I then expanded the site to cover the period from 1970/71 to 1975/76.

The Seagulls TV site has received praise from many football fans in tweets, forum posts, Facebook posts and blogs in these last three years. For example, in a piece choosing seven Albion matches from the past, Two Hundred Percent have said:

There is so much archive footage of Brighton & Hove Albion out there, and this seems like as good a time as any to those that have turned YouTube into such a marvellous archive of football. In the case on Brighton & Hove Albion, the quite magnificent Seagulls.tv is to thank for providing us all with such a magnificent selection of matches from the past. Without the diligence of people such as those behind this site, much of the footage available to us would be sitting in archives, forgotten about by all bar a few.

Now, though, I’ve pieced together a substantial new section on Seagulls TV that covers the 1990s. In the site, you can find videos of Brighton’s matches against Liverpool, Millwall and Notts County in 1990/91, the win against Portsmouth in 1991/92, the three cup clashes with Manchester United the following season, the Leicester cup shocks of 1994/95, and the famous games vs Doncaster and Hereford in 1996/97. It’s all lovingly organised season-by-season along with team photos and other bits and pieces. 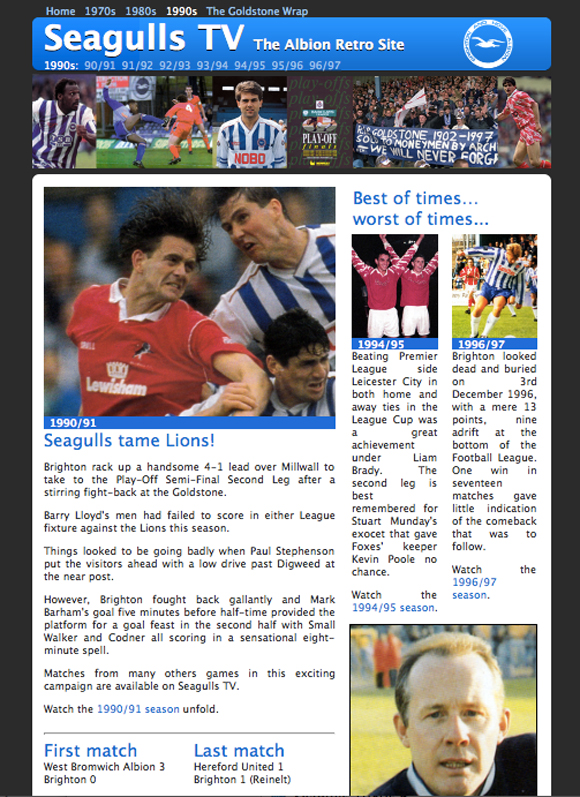 Anyway, have a look, please!

In the meantime, I leave you with some of the highlights from that decade. These are my nominations – feel free to share your own views on Twitter or by leaving a comment on the blog: