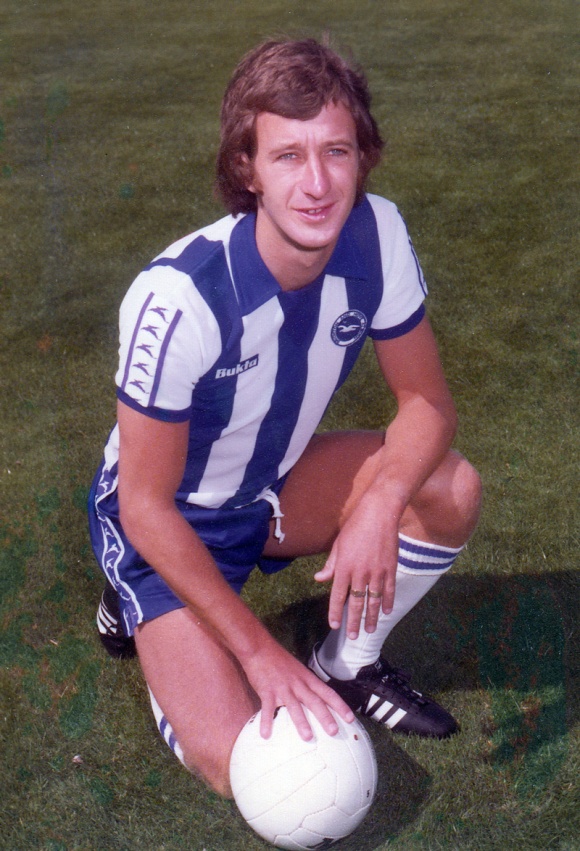 After Albion narrowly failed to clinch promotion to Division One in 1977/78, boss Alan Mullery promised at the end of the Blackpool match that Brighton would achieve the feat a year later. It seemed an unwise thing to pledge, especially when Brighton stood in mid-table position at the end of November 1978. However, the trusty and experienced full-back Chris Cattlin was recalled, in place of Ken Tiler, a decision that helped the team to find its mojo again:

Professional pride is an expression often misused, frequently abused and occasionally I misconstrued. It is, however: a phrase that is deservedly applied to the’ attitude” of certain players.

In these days Of commercialisation it is indeed pleasurable to see a seasoned professional who has seen both success and disappointment yet still has genuine enthusiasm for the game.

As Brighton push ahead towards the First Division, experienced defender, Chris Cattlin plays with as much, if not more, enthusiasm than many of his much younger colleagues.

For Chris it’s very much a case of ‘I’ve seen it all before’. Three caps for England at Under-23 level, chosen for the Football League against the Scota tish League, transferred from Huddersfield to Coventry nearly 13 years ago for £70,000 and over 250 appearances in the First Division.

When he moved to Brighton in May 1976, many thought the cheerful Lancastrian had come to the end of the road. The thought of a stay for a few years by the sea in the Third Division could be the ideal prelude to retirement.

But, for the big and enthusiastic son of a Rugby League international, that was not the aim. Twelve months after his arrival Brighton were in Division Two and a year later they missed promotion to the First by goal difference.

Last August it seemed Brighton manager, Alan Mullery had written off the one time Burnley Youth player. Ken Tiler and Gary Williams had settled in as a full-back pairing.

By the end of November The Seagulls had dropped to the bottom half of the table and Mullery seemed to be facing problems.

A League Cup defeat at Nottingham Forest was hardly a disgrace and nor was a one-nil reverse on the ice-bound pitch at Preston in February. Apart from those two defeats the presence of “Cat”, as he’s known to his colleagues, has been more than just as a lucky mascot.

His skill, enthusiasm, experience and quite obvious enjoyment is infectious.

Looking back to his time at Coventry, Chris recalls nine years of fun and dozens of games that literally stirred the blood. When he left Highfield Road, The Sky Blues’ supporters protested and signed petitions to retain their favourite.

The move to Brighton, however, was finalised but Cattlin vowed his First Division days were far from finished.

And now he could be right. The heroics of Eric Steele, the foot perfect precision of Mark Lawrenson and the pulsating talent of Peter Ward may well grab the headlines but always there, in the number two shirt is the dependable true professional, Chris Cattlin – and when skipper Brian Horton was suspended he was made team captain.

For some footballers, careers are short but Chris has no thoughts of retirement. To play regularly again in the best League in the world – Division One – is his singular aim.

Alan Mullery is unstinting in his praise for the man who, as a teenager, was prevented by his parents from starting a professional career.

Chris is already a successful businessman but football will always be part of his life. The First Division is his immediate target but even that, one imagines, won’t completely satisfy him. Maybe to play in Europe would.

Yes, the man has “Professional Pride” with a capital “P” in the best and most genuine sense.

Cattlin was ever-present in the number two shirt for the second-half of the 1978/79 season. However, when Brighton entered the First Division, he was honest enough to Alan Mullery to admit that he wasn’t going to make it as a top flight player again. A heavy 4-0 defeat at Highbury in a League Cup replay in November proved his only appearance before retiring from the game to concentrate on his rock shop.