Anyone remember collecting these cards in the early 1990s?

Pro set was a Dallas company founded by Ludwell Denny. It began with a set of cards covering American football from 1989 onwards. Indeed, ‘pro set’ is the name of a formation commonly used in this sport. (After a look at wikipedia, it’s roughly a 2-1-8 formation, I think!). By the early 1990s, ice hockey and golf enjoyed the fledgling company’s card-making ways, as it made great use of the deals it had signed to gain access to extensive photo libraries. It even put together a patriotic ‘Desert Storm’ series based on the Gulf War!

Skipping over the Atlantic ocean, in 1990/91, Pro set also launched a set of 328 cards based on the English Football League, designed to be housed in plastic wallets within an oversized binder. Division One clubs enjoyed thirteen or fourteen player cards each while little Brighton & Hove Albion, together with the other Second Division sides, were allocated two to four player cards.

Here’s the set of three Brighton cards in this series:

With me having been schooled in the ways of Panini, it certainly was unmistakeable that Pro set cards had a different sensibility, with the head and shoulders shot of the player relegated to the back of the card. The front of the card featured a high quality borderless action shot of the player in the home or keeper’s kit (not in a tracksuit nor away shirt, unlike some other collections I could mention!) within the drama of a match. Drawing from a rich stock of images, you can also be sure that this really was Perry Digweed that you were looking at, with absolutely no photo jiggery-pokery of superimposed heads on other players’ bodies! 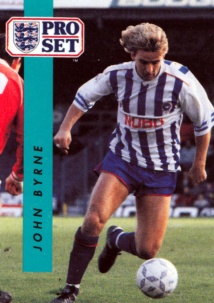 For me, as a school child, having only really known Panini stickers and not having yet clapped my eyes on the Topps’ cards of the 1970s, it was so novel to see that players plying their trade below the top flight were getting their own individual card or sticker. John Byrne had previously had his own individual sticker in Panini Football 86, 87 and 88, although that was, of course, with a Division One club at the time, Queen’s Park Rangers. 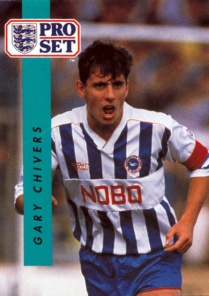 John Byrne is joined by Gary Chivers, his former team-mate at QPR, who played 42 League games during the 1990/91 season. It was a fine time for Brighton devotees to collect these cards, as our team had a great season, reaching the Play-Off Final. Had we beaten Notts County, we’d have had even more incentive to collect during the following season. As it was, I can only remember my brother and I still showing interest in them by 1991/92!