As covered in a previous post about the life and times of Norman Gall, the Book of Football was a weekly partwork from the early 1970s, building up to an authoritative encyclopaedia of the game over the course of 75 weeks. I bet, if you around then and had collected every issue over a year and half, you’d quite rightly have been very satisfied with yourself. And wouldn’t think anything of it as you proceeded to bring all six volumes down the pub and proceeded to bore your friends with your newly acquired knowledge on football tactics, club histories and goalscoring feats…! 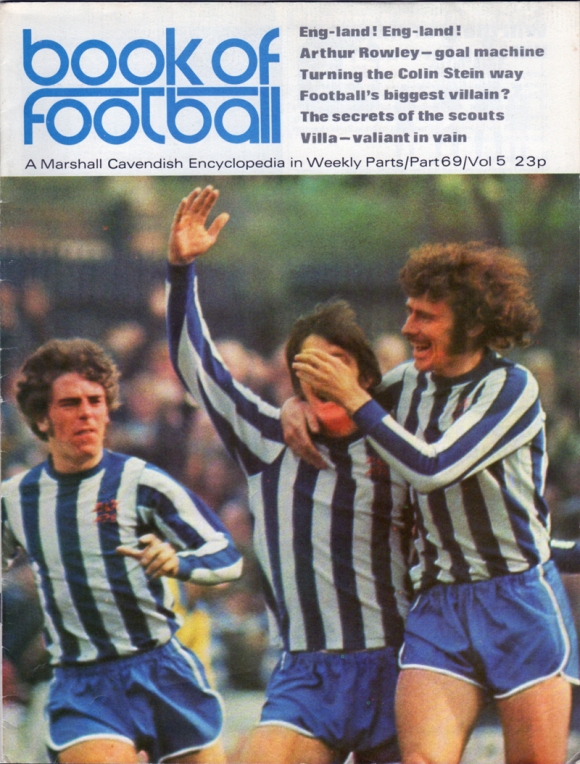 As the inside cover says:

One of the highlights of the 1971-72 season for Brighton. Kit Napier congratulates Willie Irvine after his goal which gave Brighton the lead in the vital promotion match against Aston Villa. Brighton won 2-1 and Irvine’s fine goal was featured on Match of the Day.

And what a diamond of a goal it was!

Inside we are treated to another colour photo (of Kit Napier, number 8, and Ken Beamish, on the floor) plus a potted history of Brighton & Hove Albion. Written very concisely, it charts a local Brighton college’s acceptance of the Rules of Association Football in 1872 (yes, the dark ages before Brighton & Hove Albion were formed), through to the creation of the club, the Southern League days, Brighton winning the Charity Shield (also against Villa), through to victory in Division Three (South) in 1958, to Pat Saward’s then current struggles as his charges flopped in the early months of Second Division football in 1972/73.

There are also some excellent illustrations of the coat of arms the club used in the 1960s and early 1970s, as well as some mostly accurate drawings of the home and away kit (persnickety alert: the only omissions were the red lettering on the home shirt and some white hoops from the away socks). Together with Brighton’s season-by-season record in the League and FA Cup, it all makes for a splendid portrayal of what the Albion was like back then and its relative stature to other club within the football world. And if you want more, there’s all the other 74 parts you can read too!

One thought on “Book of Football: Part 69 (Brighton)”