Amazingly, on 24th August 1981, Brighton played a friendly against the Nigerian national side.

Here’s Steve Foster’s high challenge that created the opening for Tony Grealish to get Albion’s first goal. So high, the cameraman almost missed it. 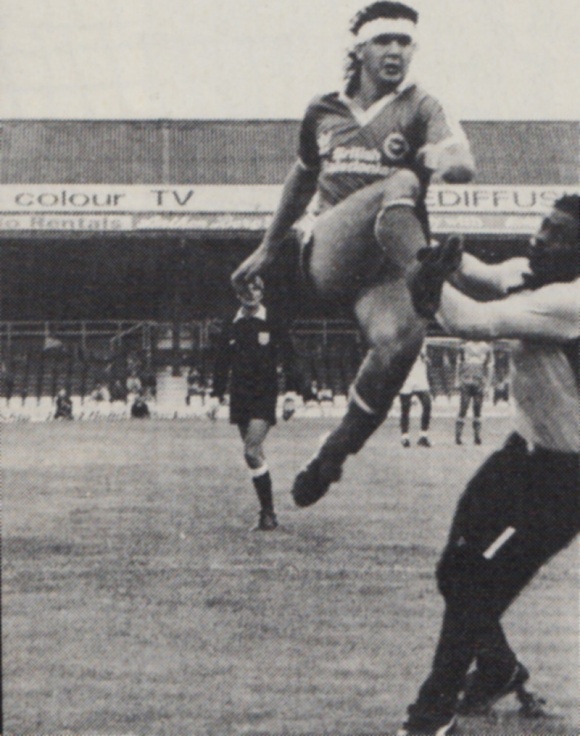 According the club’s match programme, Neil McNab was ‘always in the thick of the action against the Nigerians.’ 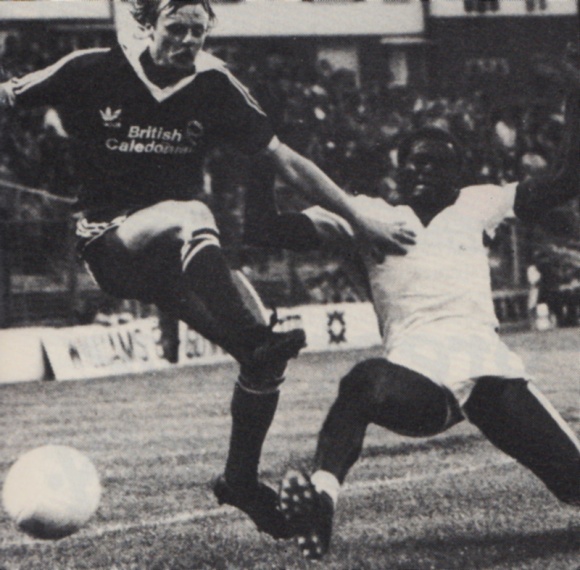 In a match sponsored by British Caledonian Airways, Brighton & Hove Albion triumphed 5-1. Grealish, Foster, Ritchie, McNab (pen) and Smith got on the scoresheet. We beat a whole country at football, in other words!

In Gordon Smith’s entertaining autobiography, ‘And Smith Did Score,’ he writes vividly about the match:

We were playing a friendly against the Nigerian national side at Brighton and it turned into a real roughhouse. I was playing up front and we were winning 3-0 when their six-feet-four centre-half came up to me and said, ‘You are shit.’

And the giant centre-half answered menacingly, ‘I am going to get you. I’ll kill you.’

After some really bad tackles were going in and Tony Grealish got such a bad tackle you could see the bone and the ligaments in his leg through the gash. The whole Nigerian team were acting like maniacs and, at the final whistle after we had won 5-1, I said to the big centre half, ‘So who’s shit now?’

‘But we’re amateurs,’ he said.

That’s when he went off his head and came chasing after me. There was a huge scuffle in the tunnel and he had to be held back while I headed for the dressing room.

Abou ten days later, I walked into the club and was told to go to the treatment room to get an injection from the club doctor. When I asked what it was for, I was told I was going to play a return match against Nigeria, in their capital city, Lagos. I immediately said I wasn’t going. ‘It’s one of the worst places in the world,’ I said. ‘The land that time forgot.’

Mike Bailey said that, if I didn’t go, he would fine me two weeks’ wages.

‘Do you want to take it out of my wages or do you want a cheque now?’ I asked him.

I got back to the dressing room and the boys were wondering what was going on. I told them about Nigeria and why I wasn’t going. One by one, the rest of the team agreed they wouldn’t go either. A team meeting was held and we told the management we weren’t prepared to go to Lagos to play the Nigerians. The following day, the doctor was back in, giving the reserves their injections to go to Nigeria. Mike Bailey didn’t even go and no one was fined. The incredible thing was that, although the reserve boys didn’t enjoy the trip, they played in front of 90,000 people in Lagos – the biggest crowd most of us would have experienced at that stage in our careers. The reserves were used to playing in front of 200-300 fans.