A much loved home shirt design from the mid-1980s. It was mostly worn with white shorts and blue socks, but even in some home matches, such as the FA Cup 5th Round Replay with Peterborough in 1986, Albion wore this with white shorts and socks. Looked great either way! This shirt design lasted two seasons at Brighton, one with the Phoenix Brewery sponsor and then with the NOBO lettering.

The thin blue and red stripes on the V-neck collar and shirt cuff were retained from the previous design, as were the classic three white stripes down the sleeves. With those magnificent three bold vertical stripes on the sides of the collar, though, this showed adidas still had striking new ideas to play around with. Perhaps with such a range of elements, it might have looked a mess. Here, though, it is neatly executed and makes for a winning, pleasing combination.

On the pitch, with this home kit, Brighton, under Chris Cattlin, also seemed to have found a winning formula. With Terry Connor and Dean Saunders firing all cylinders up front (even though Justin Fashanu wasn’t), they were pushing for a return to Division One before a slump from late March 1986 onwards sent them to a chastening mid-table finish. The fall cost Cattlin his job.

Still, the team looked pretty stylish, even as they waved their promotion dreams goodbye! If you look closely, you can see that the badge and the sponsor logo were embossed. Another nice touch! Much more than this, the balance and positioning between adidas logo, club crest and shirt sponsor show a degree of thought and taste that is often missing from many replica shirts nowadays.

Also, I rather love the horizontal pinstripes at the bottom of the shirt – a contrast to the vertical, thinner ones of the previous jersey. The horizontal stripes reprise those of the shirt that France wore during the European Football Championship in 1984 on their home turf. While Steve Penney, Danny Wilson and Dennis Mortimer (below, righteously winning the ball against an opposition player who dared to go for the now outmoded vertical pinstripes!) made immense contributions to that 1985/86 season, there’s no doubt about it: we could have done with Michel Platini, Alain Giresse and Jean Tigana in our side! 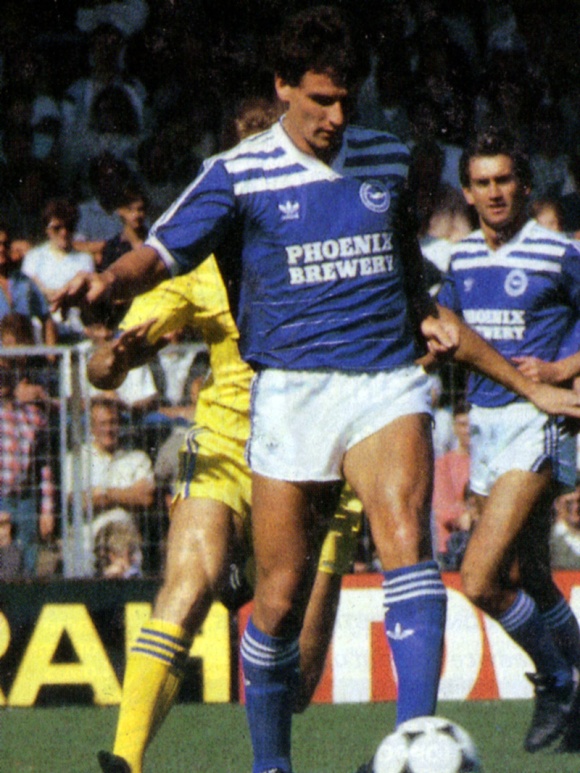