A Norwich City supporter in his youth, Mike Yaxley is a fully qualified FA coach. He gained the Diploma of Loughborough Colleges in Physical Education in 1961 and then moved to the Sussex area where he was appointed Sports Master at Brighton, Hove & Sussex Grammar School (now BHASVIC Sixth Form College).

He successfully coached the Sussex Youth team, and joined the Albion staff in 1968/69 before becoming Pat Saward’s new right-hand man in the celebrated 1971/72 campaign:

Yet, helped by the expertise of the late, great Bert Parker, who treated Albion players from the 1960s to 1990s, it was in his many years of great service as physiotherapist that Mike Yaxley became best known to Albion fans. Here he is resplendent in a snazzy navy and light-blue Adidas tracksuit treating Steve Foster against Wolves on the opening day of the 1980/81 season. Fozzie’s injury led to the introduction of his trademark headband. Equally stylish, I think!

Outside of his immediate duties for the club, Yaxley carved out a niche as a writer, as this profile in the Brighton v Blackburn programme from 2nd January 1984 explained: 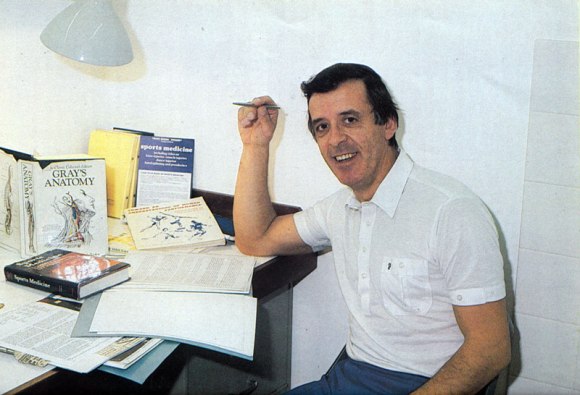 When you meet Albion’s physiotherapist Mike Yaxley, it soon becomes apparent that he is a man with many interesting ideas and theories. He is, quite simply, a sports fanatic. But his areas of specialist interest are coaching and, of course, the treatment of sporting injuries. So, it comes as no surprise to learn that Mike spends much of his free time committing his ideas to paper.

Away from it all, he’s an author!

‘I started writing for local papers when I was at college at Loughborough,’ says Mike. “We ran nine soccer sides and I was club secretary, so I gave up playing to concentrate on the administration. We got involved in an Amateur Cup run and we wanted as much publicity as we could get, so I started contributing articles about the team to local papers.

‘After that they asked me to do more match reports and then I did some articles on keep fit and so on. I enjoyed it and I carried on doing a little writing for the Argus when I left college and moved down here.’
At that time, Mike was a teacher and he has always had an interest in coaching youngsters. That interest paved the way for his first book.

‘I wrote it about four years ago. A publisher suggested a simple coaching guide for young players and I enjoyed doing it. The book will help anyone who is organising coaching sessions for the first time, but it covers more advanced work too, so it would be useful for coaches preparing for their FA preliminary award.’

Mike has obviously hit the right level with his book, Soccer. It is available in schools and libraries, as well as bookshops throughout the UK. It has been reprinted here and has enjoyed similar success in South-East Asia and Australia.

‘It’s surprising how it all snowballs,’ says Mike.

He is now working on two more books. The first sounds like an excellent idea which will again appeal to a wide audience. ‘It’s a careers guidance book for young people who want to work in professional sport. Just because you’re not good enough to participate as a competitor, it doesn’t mean you can’t work in sport. There are many other openings. This book will cover many different sports, from soccer and tennis, to horse racing and Grand Prix racing. In each section, I will outline the team around the sportsmen and provide information and addresses for the reader. So, whether they want to be a stable boy, a Grand Prix mechanic or a football physiotherapist, we’ll put them on the right path.

‘The other book I’m working on is more specialist, covering the cause and treatment of sporting injuries. If people understand the background to injuries it can help the healing and rehabilitation process. I think there’s a need for a book like this and I hope it will help people when it is published.’

1984 looks like being a busy time for Mike Yaxley the author. ‘My work with the players here at the Goldstone always comes first,’ Mike explains. ‘I write when I can find time. Often on the coach to and from away matches. Finding the time to write is the biggest problem, but when I finish a book, the hard work is always worthwhile. It gives me a great sense of satisfaction.’