Here’s Graham Rix rising like a salmon while Giles Stille sniffs the visitor’s shorts, as Kenny Sansom watches in the background.

It’s an arresting image, and one that makes for a captivating front cover for the Arsenal Annual released in time for Christmas 1981.

The match was played in April ’81 at the Goldstone Ground, and ended in a 1-0 defeat, leaving Brighton’s First Division survival on a life support machine. It didn’t help that boss Alan Mullery’s managerial record against the Gunners was lousy. Played 7 Won 0 Drawn 1 Lost 6 Goals For 0 Goals Against 16.

Still, Mullery does get a mention in the annual:

We are now used to the idea that the fortunes of a football club depend very largely on the calibre of the man in charge, on his ability to recruit the right players, to make the right team changes, to plan effective tactics, to motivate his players. When Alan Mullery became manager of Brighton, the club entered the soccer elite for the first time in its eighty-year history.

However, although the annual is a fascinating read throughout there isn’t much in the way of Brighton interest, which was the initial motivation for buying it in the first place.

There are photos from Sammy Nelson’s testimonial match for Arsenal v Celtic before his departure to Brighton. Elsewhere, there is a bigging up of the John Hawley-Ray Hankin strike partnership. Hankin vowed forlornly, ‘I’ll make the fans forget Stapleton’. Maybe he could have competed against the 38 year-old veteran version of Frank Stapleton that helped out Brighton boss Liam Brady in November 1994 by playing two games, but not at a time when the Eire centre-forward was one of the most feared strikers in the Football League.

Also turning up at the Goldstone Ground in the 1990s was Raphael Meade, then a rising star at Highbury. In a profile of young Gunners, it says:

Raf got very close to a first-team game last season but finally got his reward this season. He’s got a hell of a lot of pace and is fantastically brave in the box. He’s got all the makings of a top player. However, he’s another one who has got to work on his control like Brian McDermott with tighter controls and lay-offs. But with his type of pace he will always be a threat.

Showing his attacking prowess, here he is getting the better of Gary Stevens to score at Highbury, about a decade before Meade’s two short spells with Brighton: 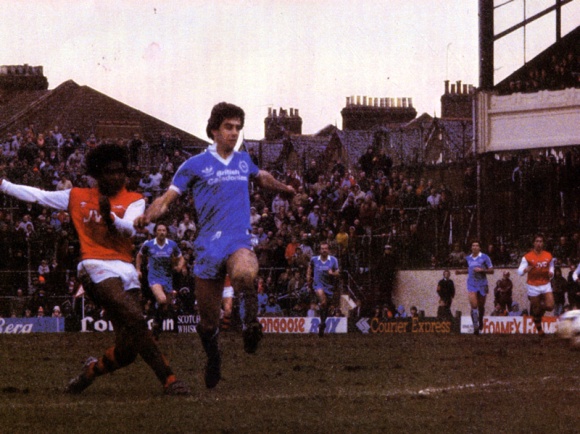