Thanks to North Stand Chat user Fork Me, last week I got hold of a digital copy of this rarely heard song about Brighton & Hove Albion from the late 1970s.

As well as watching the video, you can have a sing-a-long. Lyrics are here:

I live near a football ground, Albion is her name.
I tell you it’s almost hell when they play a game.
Saturdays are all the same, football fans about
And when you pass them in the street
This is what they shout:

Other teams’ supporters may as well go home
While in the North Stand, our boys sing: “You’ll never walk alone”
And you could be in Timbuktu and still know when they score.
Cos it’s enough to deafen you
When you hear that roar:

And now they’ve finally made it, we’re in Division 1
Brighton and Hove Albion have only just begun.
So when somebody asks you, “What team do you support?” (Seagulls!)
Stand up proud and sing out loud
And shout this in retort!

Lovely how she drops the ‘t’ from Brighton in her pronunciation in the chorus, for that authentic local dialect.

There has already been a thread on NSC about the song here. Feedback about this video can be viewed here Feel free to add your own!

Comments so far have included:

“Brilliant, thanks for sharing. Great to see the old footage and the Goldstone. Horrible to see the fences that we used to stand behind. It’s so good that those days have gone. Catchy little tune.” – Thisistips

“Fabulous” – Jackcgull, Eye On The Seagull

“Fantastic! Brought lots of happy memories of a great time in the club’s history. All the players look so young! Nice to have a reminder of what a great finisher Peter Ward was and to see the skill of Sayer out wide again. It’s amazing now to think we were made to watch from behind those fences. I well remember how they obscured the view” – ChilternGull

“That thing in the middle of Churchill Square was a eaterie I believe. And sorry the song is pants” – Beach Hut

Does anyone know any more about this singer? Google draws a blank in the matter. Can’t even find a photo!

And did anyone buy the single at the time? 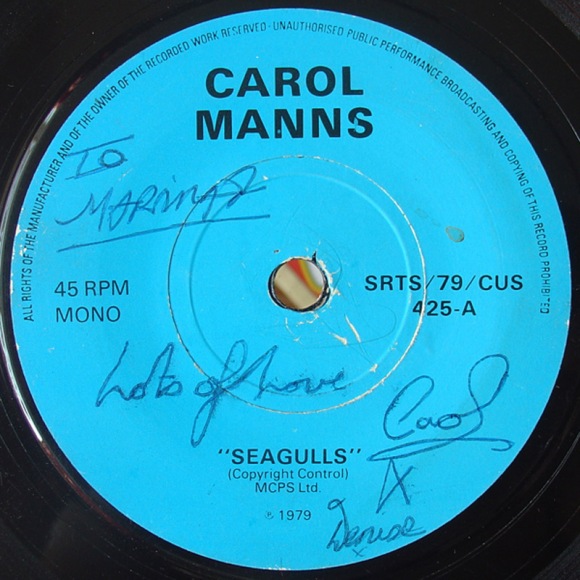 Here’s where you can download the audio file of ‘Seagulls‘ (AAC format). It will play on digital music players such as iPods and iPhones.

The B-Side is called ‘You, Me & The Boogie’ and isn’t Albion-related.