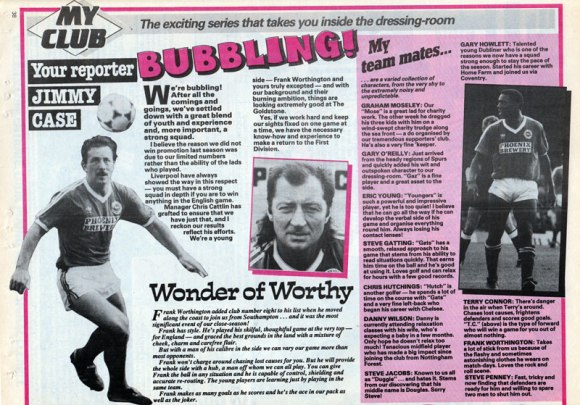 My team mates are a varied collection of characters, from the very shy to the extremely noisy and unpredictable.

Graham Moseley: Our ‘Mose’ is a great lad for charity work. The other week he dragged his three kids with him on a wind-swept charity trudge along the seafront – a do organised by our tremendous supporters’ club. He’s also a very fine keeper.

Gary O’Reilly: Just arrived from the heady regions of Spurs and quickly added his wit and outspoken character to our dressing room. “Gaz” is a fine player and a great asset to the side.

Eric Young: “Youngers” is such a powerful and impressive player, yet he is too quiet! I believe that he can go all the way if he can develop the verbal side of his game and organise everything round him. Always loses his contact lenses!

Steve Gatting: “Gats” has a smooth, relaxed approach to his game that stems from his ability to read situations quickly. That earns him time on the ball and he’s good at using it. Loves golf and can relax for hours with a few good records.

Chris Hutchings: “Hutch” is another fine golfer – he spends a lot of time on the course with “Gats” and a very fine left-back who began his career with Chelsea.

Danny Wilson: Danny is currently attending relaxation classes with his wife, who’s expecting a baby in a few months. Only hope he doesn’t relax too much! Tenacious midfield player who has made a big impact since joining the club from Nottingham Forest.

Steve Jacobs: Known to us all as “Duggie” … and he hates it. Stems from our discovering that his middle name is Douglas. Sorry Steve!

Gary Howlett: Talented young Dubliner who is one of the reasons we now have a squad strong enough to stay the pace of the season. Started his career with Home Farm and joined us via Coventry.

Terry Connor: There’s danger in the air when Terry’s around. Chases lost causes, frightens defenders and scores good goals. “T.C” is the type of forward who will win a game for you out of almost nothing.

Frank Worthington: Takes a lot of stick from us because of the flashy and sometimes astonishing clothes he wears on match-days. Loves the rock and roll scene.

Steve Penney: Fast, tricky and now finding that defenders are ready for him and willing to spare two men to shut him out.

In the upbeat article Case is adamant that “if we work hard and keep our sights fixed on one game at a time, we have the necessary know-how and experience to make a return to the First Division.”

Well, he was right in one respect. He did make a return to the top-flight, but it was with Southampton, as Chris Cattlin made a massive mistake by selling the Liverpudlian for a mere £30,000 to Brighton’s south coast rivals in March 1985. The Seagulls missed out on promotion by just three points.

Frank Worthington rolls back the years 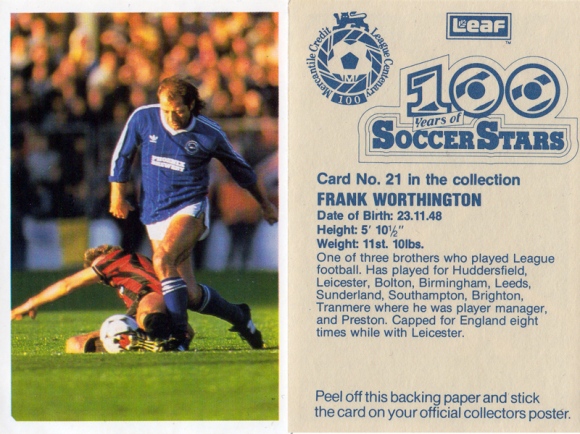 To celebrate 100 years of the Football League in 1988, Leaf issued a collection of 100 stickers. Measuring 10cmx6.5cm, these were substantially larger than the Panini and Daily Mirror stickers of that year.

Here you can see Frank Worthington in a Brighton shirt, skipping past a Manchester City defender in the 0-0 draw in November 1984.

This is probably a lot quicker than a certain horse he bet on in his time at the Goldstone Ground:

“The biggest bet I had on a horse was when I went to Folkstone while I was playing at Brighton. It was a five furlong sprint and I thought I’d have a go. I probably had £100 on which was a sizeable figure 20 odd years ago. It gave the others about 20 yards start and never got out of the stalls. Finished about fourth and we’d done our money. It was a lesson well learned.”