Steve Gritt: Hereford as I saw it

Writing in Goal Magazine in July 1997, not long after his moment of triumph:

If I stay in football until I’m 60, I doubt I’ll experience a game as tense as Brighton’s final League match against Hereford. The prize at stake was so great that a lot of my players just seemed to freeze in the first half. It was only after I’d got them in at half time and shook them up a bit by reminding them that there aren’t too many grounds worth visiting in the Vauxhall Conference that they started to battle.

Without doubt, it would have been a tragedy for a club the size of Brighton to slip out of the League – there’s enormous potential here, as proved by the fantastic support we attracted in our last few home games. But it doesn’t matter who you are or what your pedigree, no one’s got a divine right to expect to stay in the League, and that’s something I had to keep reminding our players of.

I do have every sympathy with Hereford. No one wants to see any club drop out of the League, but I’m afiaid it was a case of them or us. Exeter could have been dragged in to it, too. If we’d lost, we would have gone down by two points; the two points that the FA docked. Given that scenario, it was very likely that we would have returned to court to appeal and had that been successful, Exeter could have been relegated.

With Premiership sides hogging the headlines, it’s all too easy to overlook the plight of smaller clubs. It’s something that needs to be addressed because I’m convinced if one club went out of business, others would quickly follow suit. Despite the big-money TV deals and all the glamour of the Premiership, there’s got to be a place for clubs like Brighton. In the past, clubs at this level have proved to be a useful feeding ground for Premiership sides. I’m sure the big boys would want that to continue.

The gulf between the Premiership and the lower leagues was brought home to me again with Aston ViUa’s recent £8million signing of Stan Collymore. I can’t complain, though, because like every other manager, I’d jump at the chance to spend that sort of money on players.

But, of course, it’s not how much you’ve got to spend, it’s how you spend it. Anyone can throw £20million at a problem, but the proof of the pudding is what you get for your money. That’s why I admire Kenny Dalglish’s reign at Blackburn so much. He spent wisely to ensure them promotion, then when he had a lot of money to spend, he spent it well and won the championship – you can’t argue with a return on your investment like that.

Mind you, I haven’t done too badly this season. I pushed the boat out and spent £15,000 on Robbie Reinelt and at Hereford he paid it back ten-fold with just one goal. Not even Kenny ever got that sort of value for money. 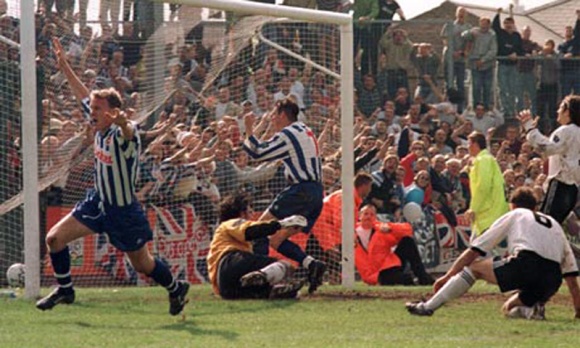