Joe Kinnear: My new club can be big-time

Kinnear in action against Port Vale.

A very on-message Joe Kinnear plays it by the book when he spoke to Shoot! Magazine about his new club, Brighton & Hove Albion in 1975:

I left Tottenham because although I was good enough to hold down a regular first team place, manager Terry Neill didn’t think so.

I’m 28-years-of-age and have plenty of soccer at senior level left in me. I told Neill reserve team football held no appeal for me.

What really made up my mind was playing in the flrst team on the opening day of the season at home to Middlesbrough, performing well, then being left out for no apparent reason.

I travelled to the Goldstone Ground and was immediately impressed with their sat-up, manager Peter Taylor, end chairman Mike Bamber. The financial rewards offered were extremely good.

It was also pointed out that Brighton have practically the whole of the South-Eastern coastline to themselves for support. I was quick to realised Albion offered a challenge I couldn’t refuse.

The only criticism I would level at the club is the players don’t think and talk about soccer enough. Once they start really believing in themselves Albion can go places. And as recent results show – we ended Crystal Palace’s superb run of seven gamea without defeat when we beat them on their own ground on September 23rd – we’re on the right road.

My first away game was at Port Vale. I ran out on to the pitch, took one look at the almost deserted terraces end said to myself, “The quicker I adjust to these situations and the quicker Brighton gain promotion, the better it will be for all connected with the club.” I’m very happy about my move. I felt I left Tottenham at the right time. I began my career when the likes of Jimmy Greaves, Dave Mackay, Terry Venables, Alan Gilzean, Mike England and Cliff Jones were regulars in the first-team.

So has Bill Nicholson, who managed Spurs for 17 glorious years.

Tottenham had ceased to become the top dogs of European soccer. A tremendous ere had come to an end.

Do I miss the glamour? Of course. But my social life hasn’t changed. I still get asked to open fetes, attend functions, make presentations.

Brighton have the potential to become as big-time as Spurs once were. 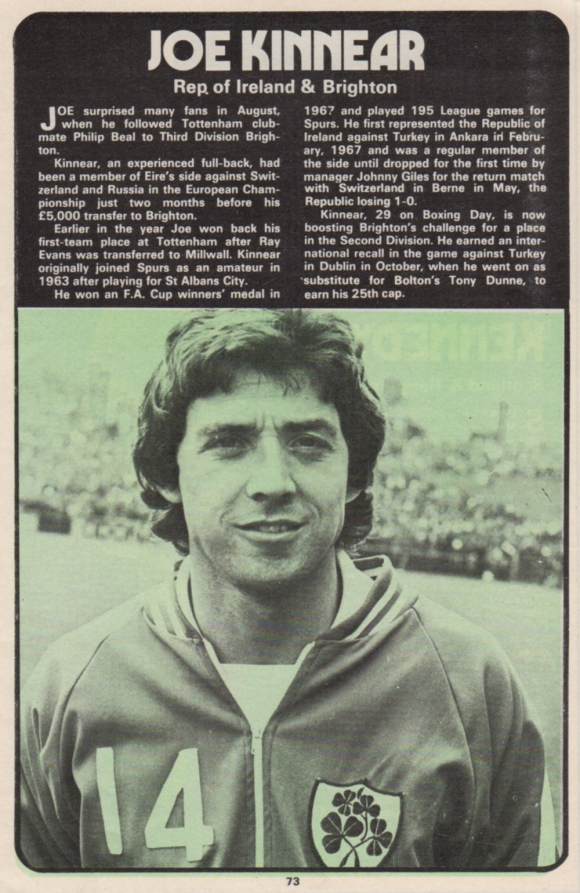