Loving the groovy graphic design of the 1970s? Me too! 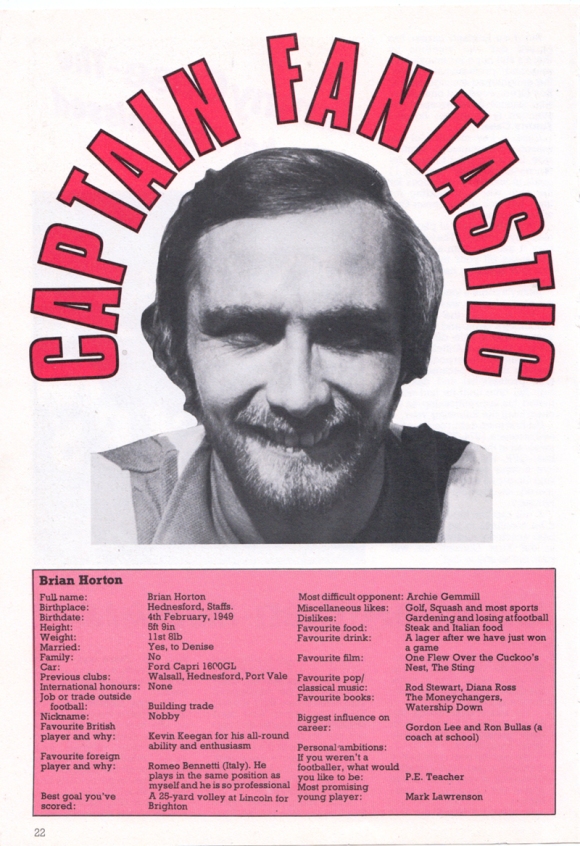 I’m unsure which football annual this article is from, but it’s a cracker. Alan Mullery talks glowingly about the qualities of his captain Brian Horton, surely the best ever skipper the club has ever had.

Try telling Alan Mullery that all you need a captain for these days is to trot out and choose ends.

For the Brighton manager’s achievement in taking the ambitious south coast club into the First Division for the first time in their 79-year history would have been much more difficult without his right hand man on the field – midfield general Brian Horton.

‘He’s got the same approach as I have,’ says the former Spurs and Fulham skipper who played 35 times himself in England’s midfield.

‘Brian’s a winner who can’t bear losing. He gets everyone else going.’

And Mullery admits that when he found Horton on the staff at the Goldstone Ground when he took over two years ago, he was happy to drop the priority item on his shopping list.

‘Before I went into management, I thought that having a good captain would be essential. Luckily Brighton had one in Brian Horton.’

As he has subsequently said, any thoughts that Mullery may have had of being a player-manager were quickly extinguished by the performances of Horton in 1976/77.

Mullery is quick to point out that it was his predecessor, Peter Taylor, who bought Horton, adding: ‘That’s just another example of the good judgment he’s brought to Nottingham Forest.’

The 29-year-old Horton was born and bred in the West Midlands at Hednesford and was inspired by watching the great Wolves sides of the 1950s from the Molineux terraces.

He’s still a fan and one of his schoolboy pals, Geoff Palmer, has played nearly 200 games for Wolves.

They will meet again in the First Division this season but while Palmer has been with Wolves since he was an apprentice, Horton’s route to the big time has been very different.

‘There were times I thought I’d never make it,’ he says. ‘My biggest fear was that I was too old.’

But after more than 200 games at unfashionable Port Vale, then in the Third Division, along came Peter Taylor to take him to Brighton for a modest £30,000.

And Brian has gone on to prove that there are as many late starters in football as in any other profession.

His goals last season were a vital factor in a promotion race which turned out to be a real cliff-hanger. But none was more important than the one which put Brighton ahead in that memorable end-of-season match at Newcastle.

The Seagulls had to win to be certain of going up and it was Brian’s goal which put them on the way when he showed typical determination and courage going in for a low diving header.

‘That was the clincher,’ he recalls. ‘It was doubly satisfying, too, because I don’t get many with my head.’

If anything pleased Brian as much as promotion last season, it was recognition by his fellow players by being named in the PFA’s Second Division side.

They weren’t asked to pick a captain but the betting is that Brian Horton would have topped the list in that category too.