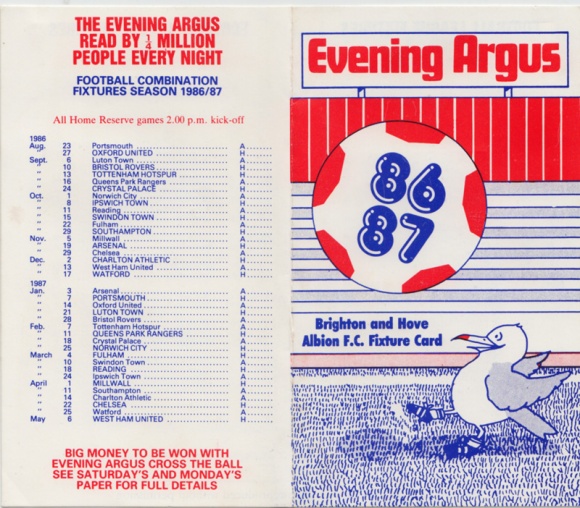 On the day the fixtures for the 2013/14 Football League season are announced (9am), I’d like to share with you an elegantly designed fixture card from the Evening Argus from the mid-1980s. You can also view the one for the 1982/83 season.

Fan anger at the sacking of manager Chris Cattlin was assuaged in summer 1986 by the announcement that Alan Mullery, Brighton boss during the glory years, was back at the helm.

As you can see, the 1986/87 campaign began with an exciting prospect of a south coast derby at home to Portsmouth (yes, it ended 0-0). By the season’s end, Alan Ball had led Pompey back to the First Division (probably the only club where the World Cup winner is considered a managerial success).

Brighton, however, headed in the opposite direction. Mullery was harshly sacked in January 1987 for lacking ‘commitment’ despite doing OK with having virtually no money to spend. Waiting in the wings, Barry Lloyd took his place. Of the fixtures in the second half of this card, only three were won.