Reach for the stars

Here are some memorable star badges from the Billy Lane era. Many of your 1950s Albion heroes are here from Roy Jennings, Adrian Thorne, Eric Gill, Bill Curry to Mike Tiddy… 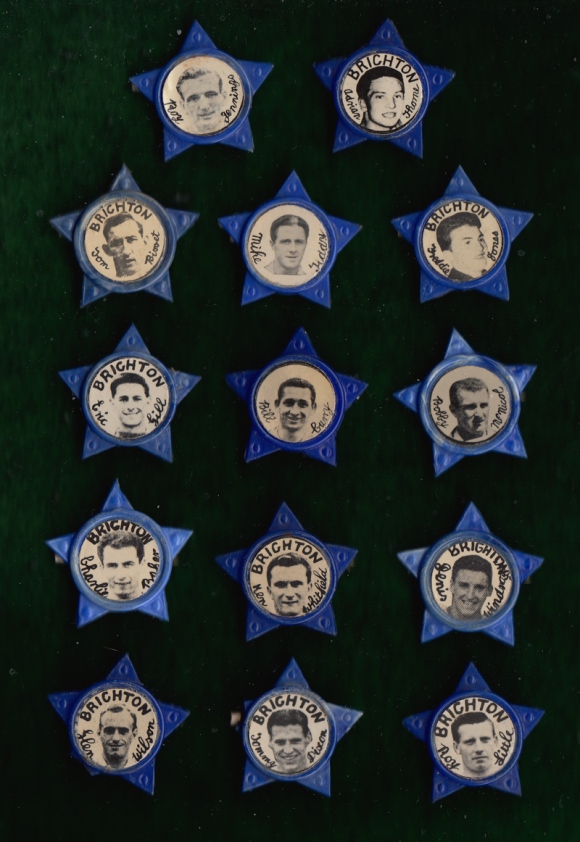 Sadly, some points of the Glen Wilson and Johnny Dixon stars have broken. 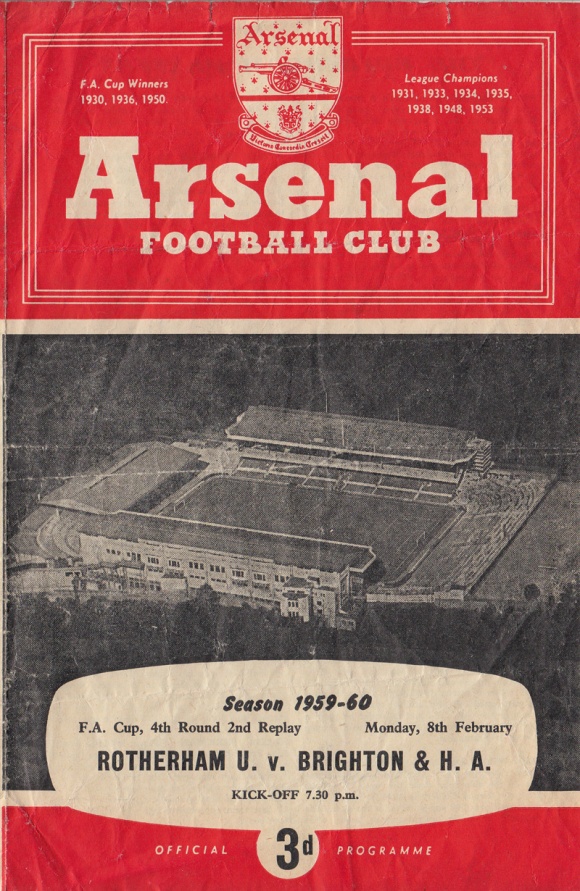 In ‘The Arsenal Story’ from 1972, a year after the Gunners had famously won the League and cup double, football journalist and author Deryk Brown wrote:

‘The Highbury of today is the best possible tribute to Herbert Chapman and the Arsenal of yesterday. Even today it is a temple of football. The present West Stand was opened by the Prince of Wales (later Edward VIII) in December 1932. The East Stand, the one the players come out of, was quietly opened before a match with Grimsby Town in October 1936. Even today it is a temple of football… It is hard to imagine how any young player who visits Highbury can avoid coming away with the impression that Arsenal is the club.

Hardly surprising for a club steeped in tradition and success that Arsenal’s playing record at Highbury was formidable. A home defeat sometimes happened, but a thrashing was rare. At the time, Arsenal’s record home defeat was 0-5 by Huddersfield Town in February 1925. It was a scoreline to be emulated by Chelsea against a young Gunners side in the League Cup in November 1999. Given this, Arsenal apart, it is hard to find in the record books which other club has scored six goals at Highbury… apart from Brighton!

Ten years before Arsenal began their ‘double’ season, Brighton drew Rotherham at Millmoor in the FA Cup fourth round in 1960, having won at Bath in the previous round. While the Millers and Albion were both in Division Two, promotion candidates Rotherham were the undoubted favourites. Indeed, in the previous round the Millers had sensationally knocked out Arsenal after three matches, drawing 1-1 at Milmoor and 2-2 at Highbury before triumphing 2-0 at Hillsbrough.

However, Albion were not going to be overawed. As Roy Jennings said in Charles Buchan’s Football Monthly in December 1961: 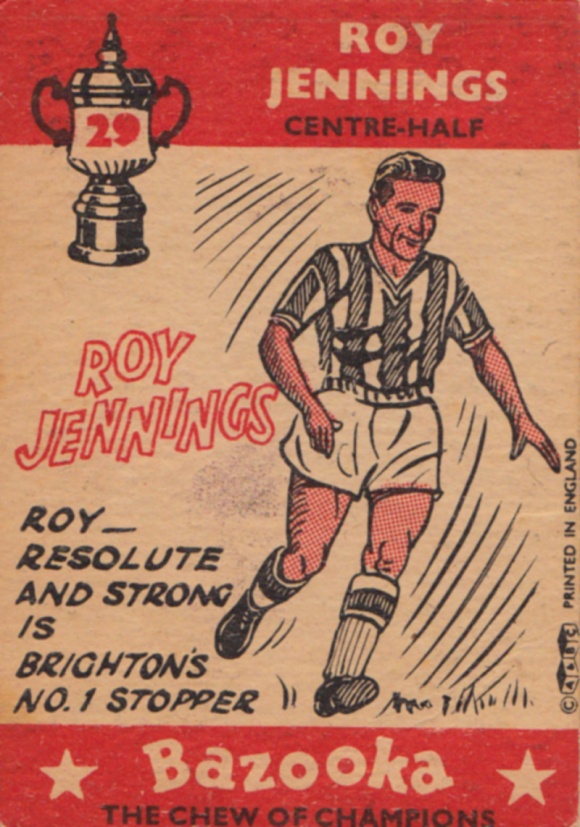 ‘We had been in three tremendous games against Rotherham. We had two gruelling drawn games of 1-1 against the tough Yorkshiremen at Millmoor and Goldstone Road [sic], and the second replay was at Highbury.’

On Monday evening on 8th February 1960, a bumper crowd of 32,864 travelled to Arsenal Stadium, where the Rotherham already had the advantage of experience, having held the Gunners there in the previous round. Under floodlights, the Brighton v Rotherham match was played in an incredible atmosphere. Jennings quipped:

‘To everyone’s surprise, we thrashed Rotherham 6-0 in that game. They must have been more tired than we were!’

Oh, how the floodgates opened! Adrian Thorne, who got both Albion goals in the first two matches, opened the scoring again. Brighton led 2-0 at half-time before a glorious spell of three goals in seven minutes early on in the second half turned the match into a famous triumph. Not least for Bill Curry, who hit a hat-trick or, indeed, outside-left Freddie Jones, who had joined Brighton from Arsenal in 1958 and scored on the night. 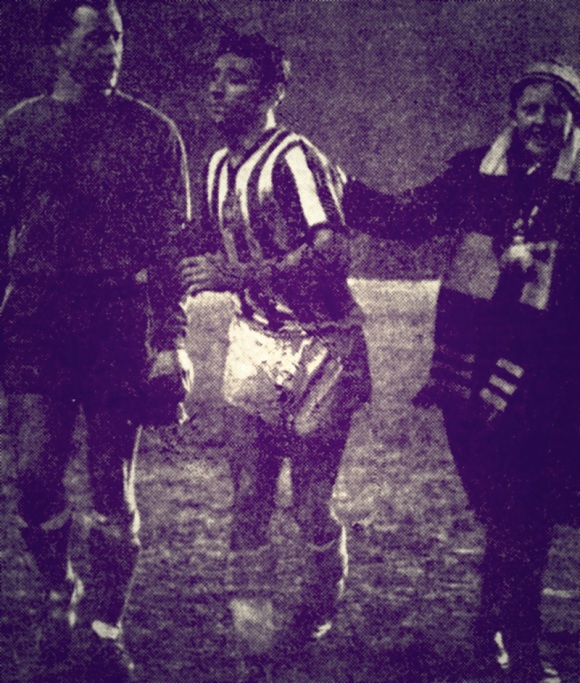 Rotherham’s Ironside gets caught up in Brighton’s celebrations. Here he is with Curry and a delighted Brighton supporter.

Brighton went down 2-1 at Preston in the next round, but nothing can take away from their feat of scoring six goals at Highbury, home of the Marbled Halls. It was better than anything that Arsenal managed that season. 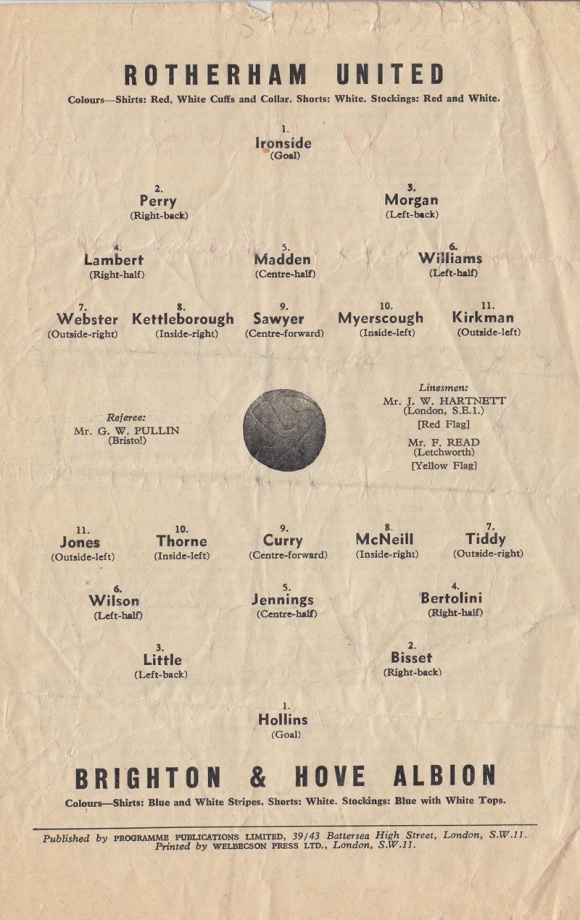 Here are Steve Burtenshaw, Roy Jennings and Adrian Thorne all getting fit at the Goldstone Ground: 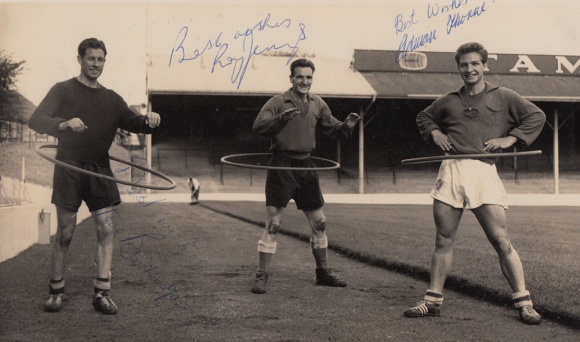 Portslade-born, super-hoopin’ Steve Burtenshaw enjoyed a sixteen year career at Brighton as a wing-half from 1951 to 1964, being granted a testimonial match in November 1963. He became assistant coach the following year, before beginning a long association with Arsenal. He also had spells as coach at QPR and Everton.

In the centre, hip-gyratin’ Roy Jennings was an Albion colleague for almost all of that period, signing for the club in May 1952 before being released on a free transfer to Crawley at the end of the 1963/64 campaign. Signed initially as a full-back, Jennings’ conversion in a stopper centre-half in Christmas 1958 did so much to preserve the club’s hard-won Second Division status.

As for sharp-shootin’ Adrian Thorne, it was the five goals of this Hove lad in the thrashing of Watford in April 1958 that made sure Albion were to enter the Second Division for the first time. Making his debut in the January of the promotion year, Thorne made 84 appearances for the Albion, scoring 44 goals before putting in a transfer request and leaving for Plymouth Argyle in June 1961.

Roy Jennings: The Sole Survivor in 1961

Brighton’s first ever match in Division Two was a disaster. It was at Middlesbrough in August 1958 and the Albion were thumped 9-0 with future Brighton manager Brian Clough grabbing five of the goals. The return game at the Goldstone Ground in December saw the Sussex side treated to a 4-6 home defeat. By 1961, the Brighton line-up was much changed, but the club was still competing in the Second Division. 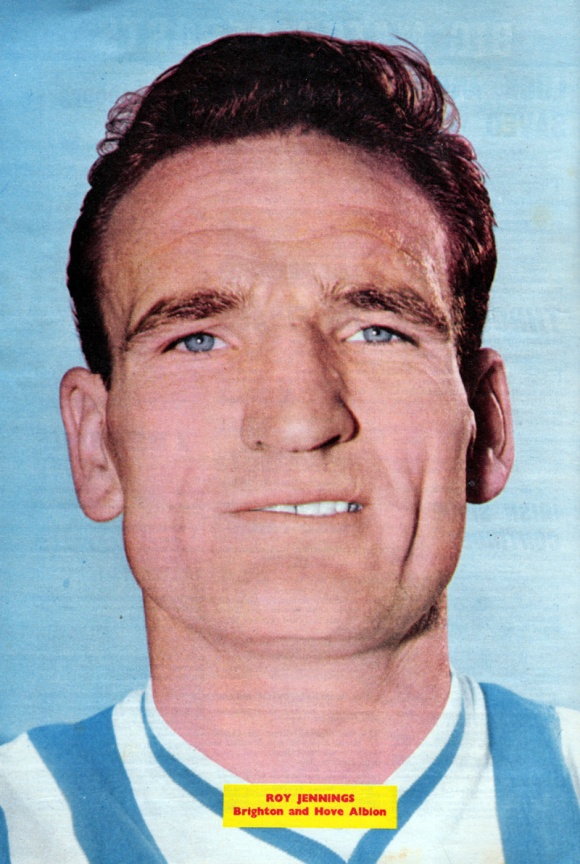 Roy Jennings was the tough-tackling stalwart of the side. In Charles Buchan’s Football Monthly in December 1961, he looked back at the previous few years:

True, Steve Burtenshaw, our regular left-half, was a colleague at that time, but Steve played only occasionally in the League side and did not qualify for a medal.

I made the bare 14 appearances needed to earn a medal. I was mainly a full-back in those days and Brighton were well off in that department. All the other stalwarts of our Third Division days have moved on… Jim Langley, Eric Gill, Glen Wilson, Denis Gordon, Peter Harburn, Frankie Howard and co.

There have been other changes in my time at Goldstone Road. A new stand to replace the rickety old construction which did duty as the main building for too many years; new dressing rooms; floodlighting.

Mr Billy Lane, who steered us to promotion and whose powers of persuasion had so much to do with my joining Brighton, has also gone. The place doesn’t seem the same without him although I feel sure that his successor, George Curtis, from Sunderland, is going to do a great job for us.

When we won promotion some people said we would be out of our depth in the Second Division. When we took two early beatings from Middlesbrough it seemed as though the critics were right.

But we recovered and more than held our place in the higher grade.

The Second Division is the toughest one from which to gain promotion. Each season there seem to be about four top-class sides challenging, with the rest cutting each other’s throats week by week.

For the last three years I have been the regular centre-half and now I am club skipper. At school, in my native Swindon, I was a full-back and won England Youth and Wiltshire county honours at the same time as John Atyeo, of Bristol City.

I had no ambition to become a professional footballer. I was keen on accountancy and studied it. I was working as a clerk in a garage when Ted Nash, a local scout, recommended me to Southampton manager George Roughton.

I signed amateur forms for Southampton and played a few games in their reserves before going into the RAF. Then I had a firm offer from Brighton and, in 1952, I signed for them as a full-time professional – and forgot about a career as an accountant.

I was switched to first team centre-half soon after those Middlesbrough defeats I have mentioned. A good game against Tottenham reserves (I managed to blot out Dave Dunmore) earned me promotion and since then I have held my place. Only twice have I missed a match through injury.

One of my most memorable games in our first season in the Second Division was a Boxing Day meeting with the then League leaders, Fulham, in 1958. Their visit drew a record Goldstone Road crowd of 36,747, with receipts of £4,376.

We beat them 3-0, Johnny Haynes and all, and I shut out centre-forward Maurice Cook out of the game.

A quick thumb through the record books show that on Boxing Day, 1958, Brighton actually lost 3-1 at Craven Cottage. Here is some very ropey footage from the match:

Brighton’s magnificent 3-0 victory over Fulham came on the following day, and was aided by the return of Jimmy Langley. Two Tommy Dixon goals and one by Adrian Thorne beat the eventual Division Two runners-up.

Sadly, after a four-year stay in the Second Division, Brighton finished bottom at the end of 1961/62, the season of this feature in Football Monthly. Albion were relegated, with Jennings’ faith in the managerial ability of George Curtis proving misplaced. Here’s the team photo from the same edition: 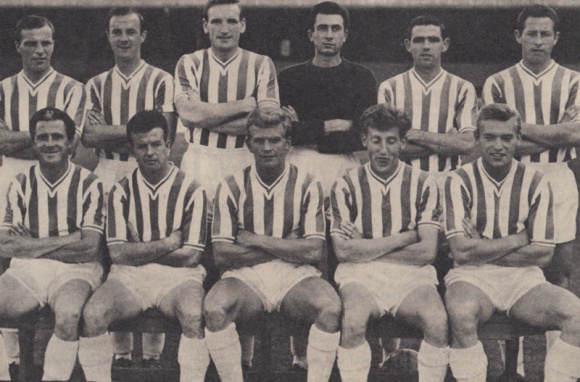 In the following season, such was his popularity, that when Jennings was dropped for three games in favour of youngster Norman Gall, Curtis’ decision prompted ‘We Want Jennings’ chants from the Brighton supporters. Roy was then restored.

He was eventually given a free transfer at the end of 1963/64 and joined Crawley Town, where he eventually became player-manager. He had made 297 appearances for Brighton, scoring 22 times (13 of which were from the spot).