From the Brighton v Charlton programme from September 1973:

It’s the Albion’s youth party at the Freiburg Youth Tournament from July that year.

Look at how small Glen Geard is in this photo – but then he was just 13 years old at the time!

With him in that front row is Francis Fraser, dad to Tommy Fraser, who was with the Seagulls from 2004 to 2009. Francis’ dad was former Richardson gang member ‘Mad’ Frankie Fraser.

Of Swans and Seagulls

Over recent seasons, many Brighton fans have admired Swansea City’s exciting brand of football as an enhanced, more incisive version of their own team’s possession game. Back in the late 1970s and early 1980s, skilful play apart, the key parallel was that both relatively small, modest clubs were enjoying their halcyon years. With the illustrious John Toshack and Alan Mullery as the respective managers, both the Swans and Seagulls had enjoyed meteoric rises to get to the top flight. By 1981/82, both clubs finished in their highest ever placing in the Football League. The sky was the limit, or so it seemed.

On Tuesday 9th May 1979, Brighton played Swansea in Mick Conway’s testimonial match with the Albion players still on cloud nine. It was three days after the Seagulls had completed the two-year journey from Division Three to Division One. Ex-Albion winger Conway was known for his dangerous crosses and speedy runs. Aged just 17 years and 45 days, he had made his Brighton league debut against Nottingham Forest in May 1973 just as Albion were sliding back to Division Three after one inauspicious season. In the number seven shirt, he marked the occasion with the equalising goal as Brighton came back from 0-2 down. 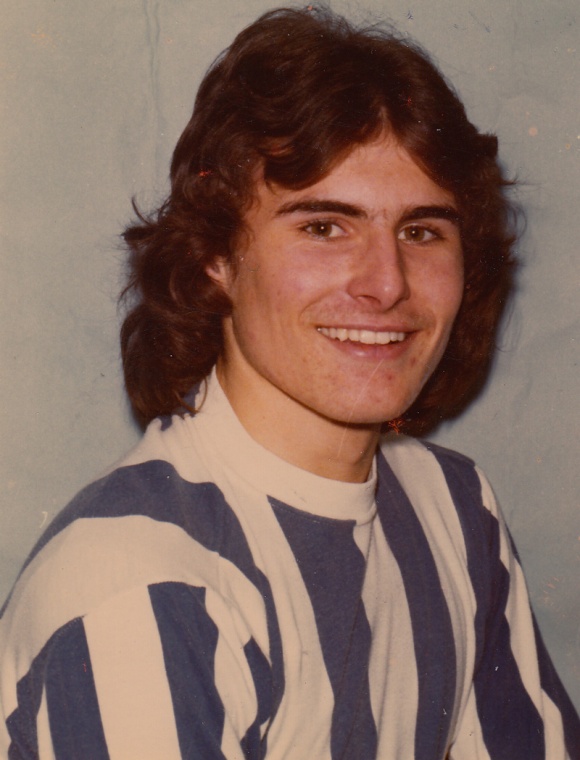 Despite this, this promising wide player only made one substitute appearance for the Albion first-team thereafter and joined Swansea for £3,000 in December 1975. He helped the Welsh side to win promotion from Division Four in 1977/78 under manager Harry Griffiths before injuries suffered in a car crash in April 1978, and subsequently against Barnsley in an attempted comeback, eventually forced Conway to retire.

Even without Conway’s services, Swansea were promoted from Division Three at the first time of asking in 1978/79 under new player-boss John Toshack. With players of the quality of Jeremy Charles, Robbie James and Leighton James, the Swans played attacking football that won over many neutrals. Just as Albion had secured a place to the top flight with that famous 3-1 victory at Newcastle in 1979, it was a televised win with the same scoreline at Preston in 1981 that took the Welsh club to the top flight for the very first time.

When 1981/82 kicked off, Albion were supposedly the more senior club, beginning their third season in Division One. However, aided and abetted by new signings such as the very experienced Alan Curtis and Bob Latchford, the Welsh newcomers picked their pockets on 1st September 1981, coming away from the Goldstone with a 2-1 victory:

As Steve Curry in the Daily Express reported:

John Toshack’s heroes came from the valleys to the seaside on a tide of determination.

And if their victory at the Goldstone Ground did not have the carnival atmosphere of Saturday’s five-goal romp against Leeds, it was in its own way, just as distinguished.

They provided an early and impressive encore to Saturday’s show-stopping performance with two goals in the first 15 minutes. And when Brighton ruffled the Swans’ feathers they hit back heaving and hissing to survive second-half pressure.

Andy Ritchie scored in the 34th minute, after Steve Foster had headed down Gerry Ryan’s free-kick, but an equaliser proved beyond the home side.

And so the Swans’ honeymoon period continued. When the return fixture was played at Vetch Field in November, Mike Bailey’s ultra-defensive Seagulls had tightened up at the back, securing a 0-0 draw. The high-flying Welsh side were in third place, although they held first position on six different occasions during this famous 1981/82 season. Playing rather more cautious football than Swansea, Brighton were also getting giddy, standing in 10th place and pushing for a UEFA Cup position.

By the end of the season, Swansea City landed in 6th position and Brighton 13th place in Division One, both clubs’ highest ever finish.

After that, it was downhill from there. Swansea were beset by an injury crisis the following season. They were also hampered by a transfer ban imposed by the Football League for defaulting on their payment instalments to Everton in the signing of Bob Latchford and Garry Stanley for £275,000. Perhaps this was not surprising. Both clubs suffered tremendously from the general fall in football attendances while trying to pay First Division wages. Partly as a result, the form of both Swansea and Brighton fell away in 1982/83. They played out a 1-1 stalemate at the Goldstone in October 1982. As you can see, Robinson apart, there was a distinct lack of the kind of penetrating attacking play and flair that had propelled both sides into the top flight:

When Jimmy Melia’s Brighton turned the tables on the Swans with a 2-1 win at Vetch Field in March 1983, with Robinson and Case scoring, it was the Sussex side’s first League victory since December, and their only away win in Division One that season. On a downward spiral, the Albion stood in 20th place and the Welsh side were only one place above, going through a similar run of dismal form. Unsurprisingly, both clubs were relegated at the end of the season, with the Seagulls bottom.

The following season in Division Two, while Brighton stopped the rot under new boss Chris Cattlin, Swansea crashed and burned. Toshack gave a Swans debut to 23 year-old ex-Chelsea defender Gary Chivers (who would later play with distinction for the Albion) in the 3-1 home defeat by Brighton in September 1983. Alan Young and Terry Connor (2) got the Seagulls’ goals. A month later, Toshack resigned. The two clubs met again in the FA Cup, at the Goldstone in January 1984, with Terry Connor scoring a stupendous volley:

Relegated from Division Two, the Swans were in free fall. Despite bringing in ex-Brighton misfit Ray McHale to strengthen the side in 1984/85 with his experience, new boss John Bond could not stop the decline. Interestingly, he released Dean Saunders at the end of the season, something that would prove great news for Albion boss Chris Cattlin, who snapped him up.

When 1986/87 kicked off, Swansea, victims of three relegations in four seasons, had fallen down to the Fourth Division, back to where it all began. A season later, Brighton were back down to Division Three. By 1996/97, both Brighton and Swansea were in the basement league, fighting to survive near the bottom. Should the Seagulls get promotion to the top flight this season, their renaissance will be complete, just as it has been for the Swans in recent years. I’m sure Mick Conway, a popular player with both sides, would drink to that.