Gerry Ryan, Chris Hutchings, Justin Fashanu and Terry Connor posed before Brighton’s match with Blackburn at the Goldstone in September 1985: 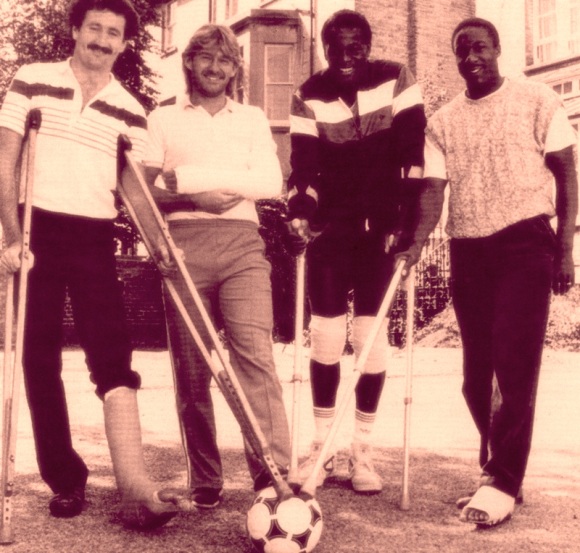 Making up a ‘plaster cast’, the photo illustrated how Chris Cattlin was down almost to a bare minimum of players from which to choose his team. Ryan’s injury was caused by the terrible challenge by Crystal Palace’s Henry Hughton in the previous season. He never played for the Seagulls again and eventually had to retire, receiving a benefit match in August 1986.

By contrast, Hutchings recovered by October, eventually making 29 League appearances, mainly as right-back. Even so, he was surprisingly dropped for the FA Cup Quarter-Final against Southampton in March, a decision that Cattlin readily admitted was a mistake, before being restored for the rest of the campaign.

Fashanu also enjoyed an extended run after the controversial striker made his return in the 4-0 defeat by Liverpool in the Milk Cup at the end of October 1985. While never quite hitting the heights of form, he was ever-present in the number 9 shirt in December and January. His last game for the Seagulls was in the memorable FA Cup tie at Peterborough in February 1985 before he fell foul of recurrent knee injury problems.

It was Connor, though, who made the biggest impact upon his return. He had limped off against his former side Leeds in the 1-0 home defeat at the start of September. It took two months to recover and yet the centre-forward plundered a very creditable 14 goals in the rest of the season, one short of top scorer Dean Saunders.