With former Brighton favourite Bill Cassidy in superb goalscoring form, Cambridge United entered the Football League in 1970 after struggling Bradford Park Avenue were voted out. Helped by the versatile Scot’s experience, the new boys quickly established themselves in that debut season. Even after he left in 1971, they eventually progressed to third in the Fourth Division in 1972/73 to win promotion.

During the following season in Division Three, Brighton’s first ever visit to the Abbey Stadium ended 1-1 in January 1974. Mick Brown’s only ever goal for the Albion helped gain a valuable point for Brian Clough’s side against their fellow strugglers. Then, in April, a handsome 4-1 victory for the Sussex side, with goals from Bridges, Welch, McEwan and Ron Howell (pen), at the Goldstone took Albion as high as 14th, and Cambridge closer to the abyss.

The U’s were relegated later that month while Brighton survived. However, it wasn’t long before the two locked horns again. Indeed, games involving both clubs curiously became a highly frequent affair towards the end of the decade, particularly at the start of a campaign.

Take August 1977 when Brighton and Cambridge played out two 0-0 draws in the League Cup 1st Round legs before two goals from Horton (1 pen) and Ward settled the matter in the replay at the Goldstone at the end of the month. Future Albion striker Alan Biley responded on the scoresheet for Cambridge in that replay. In that August, Biley was also joined up front by centre-forward Sammy Morgan. Morgan, who left Brighton for the U’s, and eventually made 37 League appearances, playing his part in the club’s second successive promotion season.

During the following August, in 1978, with Cambridge now a Second Division side for the first ever time, they humbled promotion-chasing Brighton 2-0 at the Goldstone in front of 21,548 fans. This upset came thanks to a couple of soft goals, one to Floyd Streete and then a Graham Winstanley own goal after confusion with Eric Steele. It was the Brighton’s first home league defeat since October 1977 and left some pessimistic supporters scratching their heads as to whether the Seagulls really could make it to Division One after a shaky start.

Here is the matchday programme cover: 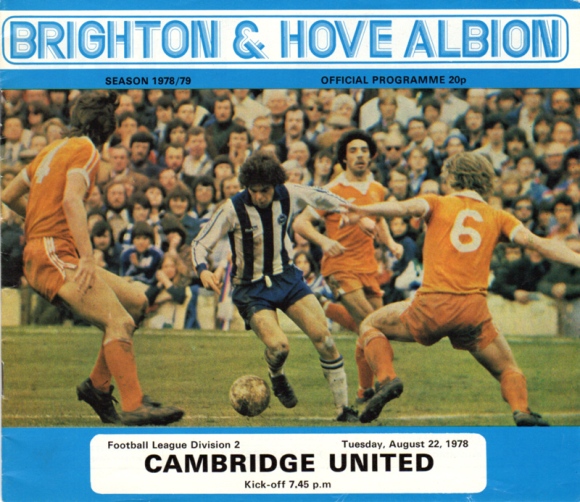 Not only did Cambridge steal the win, they seemingly got hold of our lovely matchday programme, and traced the Peter Ward image with blotchy felt tips to use on their own publication cover for the following season. Here is the end product for 1979/80, a sight that Albion fans saw when Brighton drew the U’s in the first round of the League Cup once more:

In August 1979, Brighton won the 1st leg 2-0 thanks to a Horton wonder goal and a last minute Ward effort at the Goldstone. A month later, they then beat Cambridge and their programme cover copycats 2-1 in the away leg. It proved that cheats don’t always prosper, at least not ones armed with felt tip pens and a high level of temerity.

* Cambridge weren’t the only programme copycats at the time. Notts County’s illustration for their cover in the early part of 1982/83 was based on a photo of players of rivals Nottingham Forest celebrating John Robertson’s goal in the European Cup Final in May 1980. With the Forest influence becoming widely known, by the time Brighton visited Notts County in April 1983, the illustration had been replaced by an action photo.