A day out with Dale Jasper

Croydon-born Dale Jasper was a Chelsea supporter who did not have a successful time as a first team player at Stamford Bridge. Nevertheless, he was once rated as an outstanding prospect in both defence and midfield. Kelvin Barker on the Sporting Heroes site notes:

Dale had a composed, elegant playing style which was pleasing to the eye and he was given an immediate opportunity to exhibit his skills at the highest level when the new season [1984/85] began.

Sadly, he turned Chelsea fans against him when he conceded two penalties after coming on as a substitute in the Milk Cup Semi-Final First Leg at Sunderland in 1985:

His Chelsea career never recovered. Seeking a fresh start, he joined Brighton on a free transfer in May 1986, before the end of the 1985/86 campaign.

Tony Norman wrote a splendid piece about Jasper for an Albion matchday programme in 1986/87. Could this ex-First Division player be the man to get the Seagulls back into the top flight? 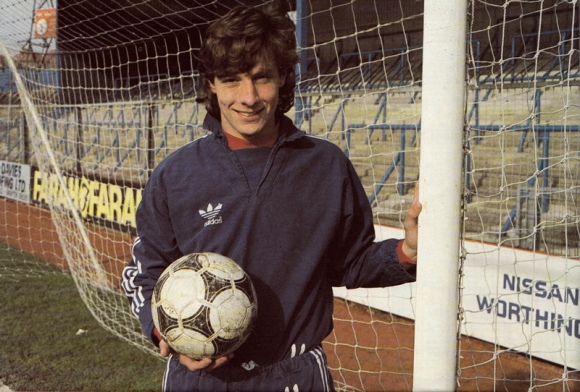 When 23-year-old Dale Jasper signed for Albion a year ago. he couldn’t believe his luck.

Within three days, he was walking up the steps of a British Caledonian let and heading off for the trip of a lifetime to Hong Kong.

“That was quite a start to my days at the Goldstone,” said Dale as we sat in the sunshine in the deserted stadium. “I had been determined to get away from Chelsea, because I wanted regular first team football Quite a few clubs showed an interest in me, including Reading and Charlton, but when Brighton came in for me, that was it. I knew right away this was the club I wanted to play for.

“I signed on the Monday and three days later I flew out to Hong Kong with the team, so it wasn’t a bad week, was it? We played an exhibition match over there. I was a bit disappointed when a goal I scored was disallowed, but I was smiling by the end of the game, because we won 3-1.

“We were away for about a week and it was a very good way for me to meet the rest of the p!ayers and get to know them. It all seemed a bit unreal, because it had all come out of the blue, but it was very enjoyable.”

Dale had been linked with Chelsea Football Club from the tender age of eleven and when he decided to move on, he expected it to be a big wrench.

“I thought it would be a bit difficult to settle, but it was no problem at all,” he explained. “This is such a happy, family club. I love it here. I’ve never missed Chelsea. I still keep in touch with some of the players at Stamford Bridge, but I’ve never regretted leaving.”

Dale has his own home near East Croydon railway station which is just 40 minutes up the line from Brighton But he pops in to see his mum and dad every day.

“We’ve always been very close. They ve travelled all over the coumry to watch me play, and I don’t think I would be playing professional football today if it wasn’t for them. When I was younger, I had a wild streak in me, like a lot of kids do. But my parents kept me on the ‘right track’. They’ve always set a good example and I respect them for that.

Dale has a sister and two brothers. “Football’s always been a big thing in our family. My brother Tony plays in New Zealand and our younger brother Wayne has had offers to train with Crystal Palace, Tottenham Hotspur and various other clubs, so things are looking promising for him too,”

Dale likes to keep himself fit during the summer break with a few games of squash and he is planning to do some decorating in his Croydon home too. But there will be time to relax.

“I’m planning to have a couple of weeks in Corfu with some friends of I mine. I’ve been to Spain and those busy resorts are nothing but I aggravation. So, I fancy going somewhere reasonably quiet and taking it easy.”

Dale will be taking some famous musical friends with him too.

“Sitting back in the sun listening to tapes of my favourite bands like Simple Minds, UB40 and U2, that’s my idea of a great day out on holiday.” Then Dale will be fit and ready to play his part in a new season that will, we believe, see the Seagulls smiling again!

He played 32 League appearances plus two as substitute in the disastrous relegation season of 1986/87, scoring twice, including a 30 harder in the 4-1 defeat at Derby in October 1986. Clocking up his game time, he then amassed a further 12 League starts, plus two as sub, the following season as Barry Lloyd’s side unexpectedly achieved promotion from Division Three. One of his four goals that season was this equaliser at Bristol Rovers in October 1987:

Memories of his contribution to the Albion’s play are mostly negative, however. As Zeitgeist on North Stand Chat remarked in 2004:

Dale Jasper was generally pants. Coming from Chelsea you’d expect him to have a bit of pedigree about him. Afraid not, Charlie. The Chelsea of that era were a piss poor apology of the moneybags superstars of today. They didn’t have a pot to piss in and were on the verge of dropping into the second division. Dale Jasper’s five minutes of fame was punching the ball into the net whilst lying on the ground for a late equaliser against Chesterfield. Fortunately, Stevie Wonder was the ref and we got away with it. 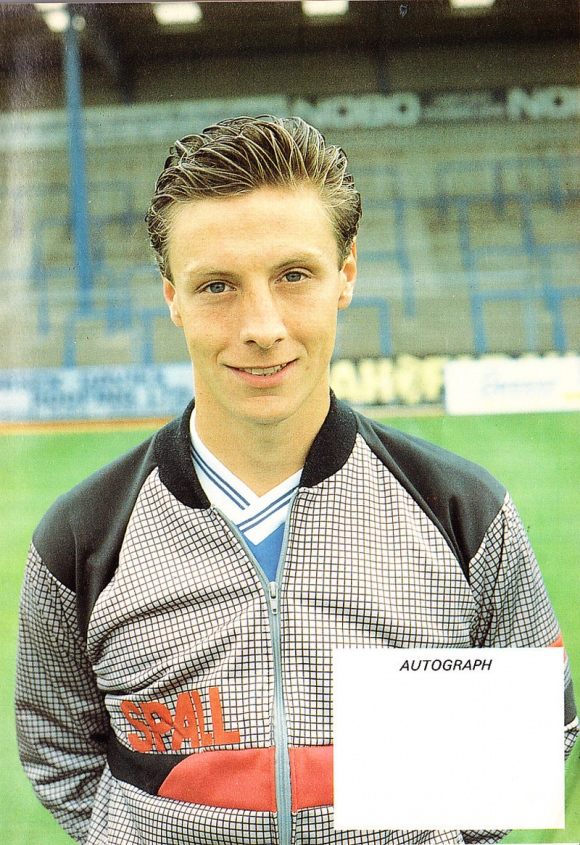 Interesting that as a joke, he lists winning the Sussex Senior Cup as the extent of his ambitions: 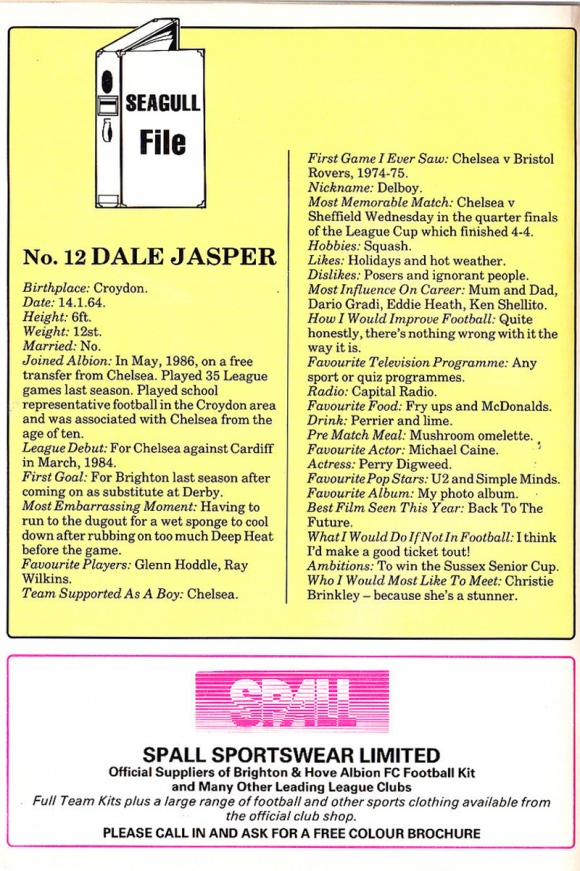 In May 1988, he featured in the reserve side that lifted the Sussex Senior Cup for the first time. A few weeks after this triumph, he was released, eventually playing for Crewe, Crawley and Kingstonian.

According a piece in the Football League Paper in early 2012, Jasper was ‘last known to be living above a pub in South London and working on the building industry.’

One thought on “A day out with Dale Jasper”