During 1983/84, Brighton & Hove Albion had three Youngs in their squad: Eric Young, Willie Young and Alan Young, none of whom were related! In a seldom seen aligning of the stars in March 1984, all three made the starting line-up in the fixtures against Manchester City, Derby County and Leeds United. It proved a winning combination as Albion drew 1-1 against promotion-chasing City before thrashing both Derby and Leeds 3-0.

Scoring a powerful volley from a Gary Howlett cross in the second half against Derby was Alan Young, a burly striker who was exceptional in the air, yet also had fine technique on the ground. The Scot had been signed by Jimmy Melia in a £150,000 deal for Brighton from Sheffield United in August 1983 as a replacement for Michael Robinson. He announced his arrival at the south coast club in September 1983 with a spectacular overhead kick in his debut against Chelsea.

Although he had only one season at the Goldstone Ground, and was in and out of the side with injuries, he was regularly on the scoresheet when playing for Brighton. Thanks to Simon Kimber, who has allowed me to share an extract from Alan Young’s autobiography ‘Youngy’:

I didn’t realise until I looked recently that my goal return at Brighton was pretty decent; I got 12 goals in 26 matches and I really enjoyed my time at Brighton.

The supporters were still recovering from losing the FA Cup Final to Manchester United in 1983 (this was the game when Gordon Smith should have won the Cup for Brighton with a late chance when he was one on one with Gary Bailey) and the whole euphoria of the day and the occasion. I’m not saying that Brighton isn’t a proper football club but in Brighton the football was viewed as part of the entertainment industry. The football they tried to play reflected that and if the fans weren’t being entertained then they got at the players and the manager.

At Brighton we played with a lot of freedom. There were no restrictions. We were allowed to make our own decisions on the pitch. We had the players with the right experience to do that and I’m thinking of international players like Corrigan, Ryan, Grealish and experienced lads like Jimmy Case and Steve Foster. The football was very enjoyable there and never more so than when Jimmy Case and I were playing together; I loved playing with Jimmy. He was very quiet and has a hearing aid because he doesn’t hear too well.

I remember we finished training one day and headed off to Woody’s as usual and then on to the gentlemen’s club for a game of pool. Then everyone starting to drift away and by ten o’clock in the evening there are only about six of us left. (Bear in mind that we didn’t have mobile phones back then so you couldn’t phone up to let anyone know you were going to be late.) 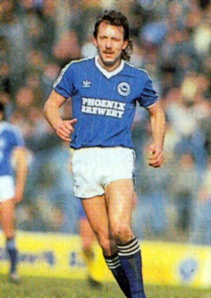 So I got home and Karen asked me where I had been so I told her and then she asked me if Jimmy had been with us because Lana (Jimmy’s wife) had been on the phone asking if we knew where he was. I told her not to worry because he left same time as me and would probably be home any time soon. The next day Jimmy is nowhere to be seen and nobody knows where he is. So there is a little bit of panic around. Nobody has a clue where he has gone until the following morning at training when Jimmy saunters in, whistling and acting as if nothing is wrong. So I asked him: “Jim, where the f*ck have you been?” and he looks at me and says “What do you mean?.”

I said “Jim, nobody knows where you have been, we’ve been panicking”.

Then he smiles and goes. “Ha! The Avenue” and I’m like “The Avenue? What Avenue?” and he says “The f*cking Avenue de Champs Elysee!.” Then he tells us how, after we all went our separate ways that night he fancied going to Paris! So he went up to Gatwick and jumped on a plane to Paris. He showed us the stamp in his passport to prove it – he had gone to Paris for a day just because he could and he fancied it.

On the pitch he was different class though. I once saw him on the receiving end of a dreadful challenge when a guy (I forget who) tried to get the ball off him and put his studs down the back of his calf and Achilles. That really bloody hurts and Jim just let the ball roll away and turned on this guy and, through gritted teeth, said “Don’t you ever, ever f*cking do that to me again!” and then he turned and went after the ball and got it back before it went out. I watched this going on and the guy was sh*tting himself. That is the only time I have really seen one professional footballer genuinely scared of another. Because Jimmy could be a hard bastard and really knew how to look after himself.

He used to do about two hundred sit ups every days after training. He would wear one of those polystyrene bags that you get from the dry cleaners when he did them. He got me in to it as well!

If you are interested in reading more, you can buy ‘Youngy,’ the Alan Young autobiography here on the accompanying site.

You can also order a rather wonderful Alan Young t-shirt from Cult Zeros. 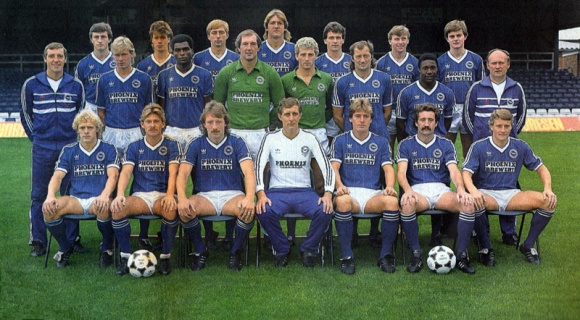