The class of Lawrenson shuts out Dalglish and Francis

Below, Mark Lawrenson vies for the ball with Arsenal’s Alan Sunderland: 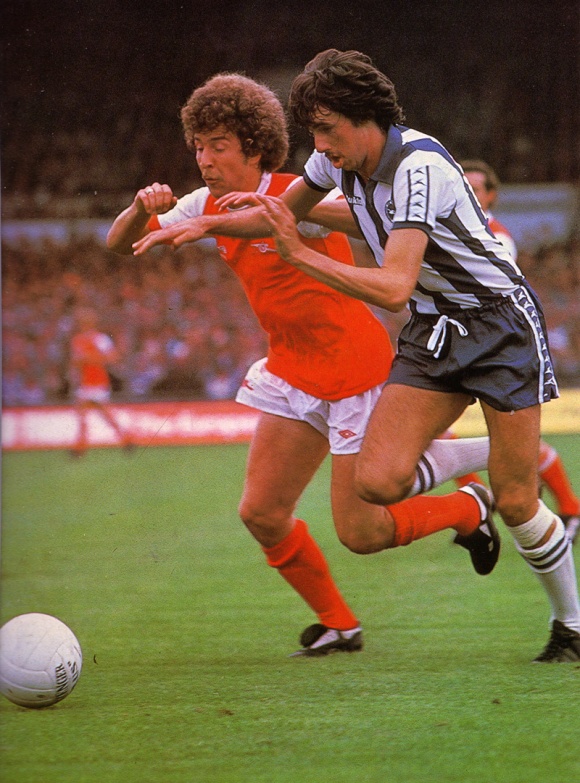 In 1979/80, Mark Lawrenson gets interviewed by Keir Radnedge in Football Weekly News (April 9–15, 1980). As the season draws to a close, he reflects on his growing reputation. The ex-Preston star also discusses his surprising switch to midfield that played a significant role in Brighton’s revival in their debut campaign in Division One:

I bet Ron Greenwood and his coterie of England aides regret Mark Lawrenson’s decision to play for the Republic of Ireland. When you hear Brighton manager Alan Mullery describing his player as world class among sweepers – not once, but several times over on repeated visits to the south coast – you start to wonder what rare talent England have missed out on.

Lawrenson is a player of obvious class, shows the sort of accuracy and control whether he plays in defence or midfield which will light up the First Division for a long time to come. And yet he chose to play for the Republic because of his parents’ birth qualifications, even though he was born in good old Preston. But Lawrenson has no such second thoughts on the subject.

“Already I’ve been all over Europe,” he says, “and won 10 caps. I’ve really enjoyed my international football. I don’t sit at home and think: ‘I wish I’d waited. To be quite honest, I never thought I’d be good enough to play for England. When the chance came along to play for Ireland I was glad to take it.

“I know people say that with England I’d have a far better chance of one day playing in the World Cup Finals. But I’m not so sure I’d be all that better off with England – apart from whether I’d get in the team.

“I think we have a pretty good chance in our group. And it didn’t do us any harm the other week to start with a win in Cyprus.”

Yet, it’s to an England World Cup hero of 1966 that Lawrenson looks first when he traces back the steps of his career, and considers the varied influences which have made him the popular player he is. Preston was always going to be his club. Not just because of his birthplace but because of family connections past and present, and it was Bobby Charlton who signed him professional. However, it’s not Charlton whom Lawrenson recalls with gratitude for guidance, but Nobby Stiles.

“He’s been the biggest influence on my career,” says Lawrenson. “Bigger even than Alan Mullery – at least so far. I was a winger when I joined Preston, while he was coach, and he was the one who converted me to my present position – in the middle of the back four, that is. Nobby was very good with the youngsters. He was almost like a father-figure. He commanded respect not only because of what he’d achieved himself but because of the way he’d help iron out your faults.”

There could hardly appear a greater contrast in playing manners, but those who remember Stiles as a mere terrier in the tackle might now care to consider him in a new light, if they haven’t done so already for his work in charge at Deepdale.

The one thing he couldn’t do was keep Lawrenson. Preston needed the money and the player had ambitions. So for little more than £100,000 – the figure seems ludicrous now – he travelled to the south coast to join Brighton, little dreaming that in two years he’d be in the First Division.

“I didn’t think about it when I moved. People said to me that Brighton were a good club, a club who were going places. That they had a forward-thinking attitude with a good crowd and used their money to buy players to keep strengthening the team. But I didn’t join because I thought this was the quickest way into the First Division.”

Lawrenson’s career was, in fact, to progress by leaps and bounds. He’d won his first cap at 19. Then, in his first season on the south coast, Brighton missed promotion on goal difference. The next year … up they went. Lawrenson hasn’t found a great deal of difference between divisions. “The only thing is that in the Second Division, where most teams have six or seven very good players, in the First Division it’s at least nine,” he feels.

More’s the pity then that Brighton had, as Lawrenson described it “a nightmare start to the season. “We were wondering when we’d ever pick up a point. If we’d made a reasonable start, got a few points, then we could have played a bit of football, relaxed a bit and it would have been much easier. Still, I like to think the worst is behind us now. Next season we’ll be that much better adjusted. And, hopefully the pitch will have been sorted out. The groundsman has put in more hours this season than almost anyone at the club,” said Lawrenson. “He’s just had to keep sanding it. But during the summer something will be done and that’ll make it so much easier for us next season.”

As for his own career, he adds: “I haven’t had much in the way of setbacks. It’s all gone so fast, everything that happened has helped me progress.”

Lawrenson’s favourite position is in the centre of defence, as sweeper. But he doesn’t complain about the recent switch to midfield to help out manager Mullery. “It was a bit awkward going into midfield, but I enjoyed it. I still think though that the middle of defence is my best position. That’s where I see myself playing the rest of my career.

“At Brighton? Yes, why not? It’s a good club. Good management. Alan Mullery’s been great. I pay him pretty well for those nice things he’s said about me! Seriously, he’s given me a lot of encouragement.”

When you consider he’s still in his early 20s, then the man who’s been called “Brighton’s Beckenbauer” clearly has a long way to go. It’s reasonable to assume that as he progresses so will Brighton. Already they’ve surprised a lot of people by holding on in the First Division, their determination and will to survive exemplified by the seasonal double over European champions Nottingham Forest.

The home game was the one in which Lawrenson snuffed out the threat of Trevor Francis. The previous week he’d dealt similarly with Kenny Dalglish – whom Lawrenson freely acknowledges as the best forward in English football.

The way Mark Lawrenson is going, a lot more fine forwards will find themselves shuffled up the back alleys of play in seasons to come.

Lawrenson went on to play one more season at Brighton, and was briefly made captain, before his big transfer to Liverpool in August 1981, for £900,000.