Here’s the Evening Argus headline for its Night Final on Saturday 16th April 1983:

I imagine most of us know in minuscule detail what happened on the pitch on that famous day of the FA Cup Semi-Final over Sheffield Wednesday at Highbury.

Inside, though, there is a story of how Gordon Smith’s parents Bill and Edith Smith travelled 500 miles from Ayrshire to see the game, and will be looking after the player’s three year old son Grant and daughter Lyagh-Ann, 12 months.

Meanwhile, Joan Shipp, secretary to the club’s commercial manager, Ron Pavey, tied up her stockings with a special lace garter made from yellow and blue ribbons. Decency prevents me from reprinting the shocking image of Joan flashing her thighs for the Argus here.

Elsewhere, at Forfars, work on Saturday kicked off early at midnight for some of its 45 workers, so they could all watch the game. Tim Cutress, the production director, said: “We have pushed everything out so we can all get up to London. Some came in at midnight and everyone started two hours earlier.”

Putting their dough on an Albion victory are Tim Cutress, John Joyce, Matthew Cutress, Graham Taylor (no, not that one) and Chris Budd.

Finally, we end with a story of …lurrrrve. 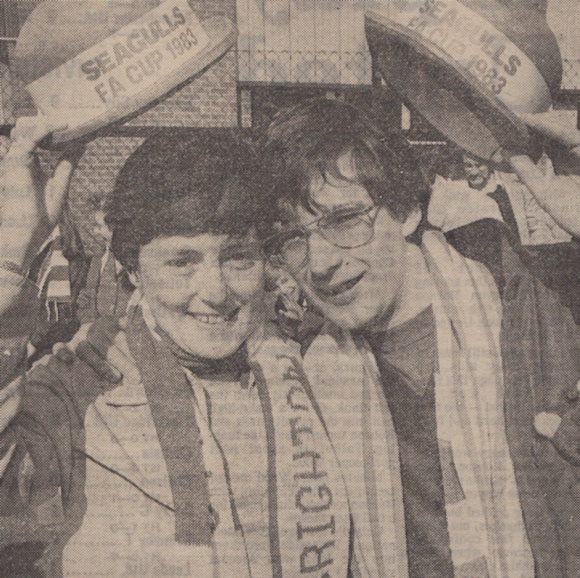 This couple in love set off for Highbury knowing it was their last chance to cheer Albion in this year’s cup.

“We are getting married on Final day so we know we would not be going to Wembley,” said communications engineer David Lewin, 22, a dedicated fan.

His marriage to 21-year-old Deborah Locke, of Devonshire Place, Brighton, was arranged before the team started its FA Cup charge.

“There is no way we can re-arrange the date,” said David of Eastbourne Road, Brighton. “But we will really enjoy today.”

Deboroah added: “We do not get married until 4pm so we can watch the first half of the Final on TV.

So, with Albion 1-0 up at half-time against Manchester United at 3.50pm, if you ever wanted to know why the soccer gods turned against the Seagulls, it’s because these ‘dedicated’ supporters David and Deborah turned off the telly at that moment. Bad fans!