‘Splash it on’ with the Seagulls’ deodorant and aftershave

A few months’ ago, this blog carried a feature on Seagulls Talc.

Little did I know at the time, but it was quite frequently promoted in the matchday programme during the build-up to Christmas in the 1978/79 season as Albion sweated it out as they brought their promotion bid back on course.

For example, in the programme against West Ham in October 1979, it said:

Our players were photographed earlier in the week sampling the first ‘Sports’ splash-on deodorant and after shave and also talc which is now available bearing the official ‘Seagull’ motif. Beware of imitations. There is only one such product available officially endorsed by the club and it really is quite something. The complete pack as well as individual items are available from the Club shops.

An advert with this extraordinary photo was included: 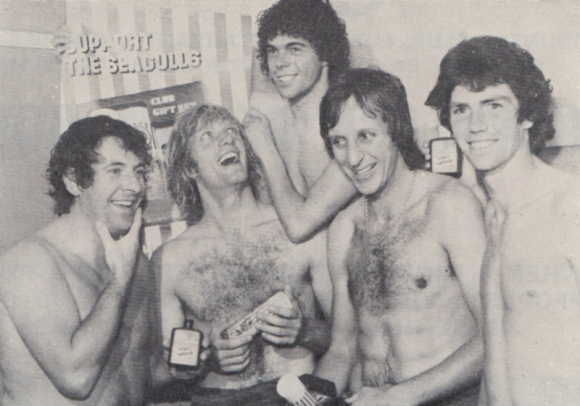 Clearly, what was OK for Kevin Keegan and Henry Cooper (in the famous Brut advert) was also fine for Alan Mullery and co. The players left to right were Teddy Maybank, Peter Ward, Chris Cattlin (although the talc or deodorant seems to have made him look rather like Johan Cruyff!) and Gary Williams.

The advert informed fans that the products are “ideal Christmas presents or gifts on any occasion for the Seagull supporter.” They were available from the Seagulls Shops during match days and the promotions office during the week, as well as many local stockists.

(Apologies for the blurriness of this and other product images. That’s just the steam coming out of the shower, I promise!)

For just £1.30, a bottle of the splash-it-on aftershave could be yours…

For just £1.04 and 99p each, how about the deodorant antiperspirant and, our old friend from the previous blog entry, the sport talc? 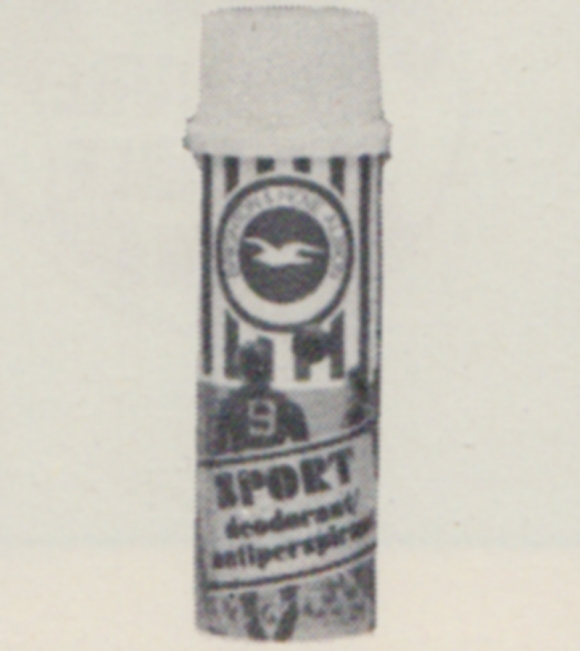 Finally, you could get the Club Gift Set of the Sport Talc and Sport Splash for £2.65. That’s a cool 36p more than if you’d bought them separately but at least it came in a lovely presentation box…

Buy one! Buy two! In fact, buy it all! The products were advertised as being ‘created exclusively and officially for Brighton and Hove Albion by Panache cosmetics, manufacturers of several leading brands of toiletries.’

This was backed up by the words of Ron Pavey, Commercial Manager, in the Peterborough programme in early November. He said:

“The new splash-it-on deodorant, Talc and after shave etc is now available with the distinctive Seagull motif and this is already in great demand and a pack containing the set makes an ideal Christmas gift.”

Yes, an ideal Christmas gift, although a fortnight later in the Millwall programme, Ron also began promoting some ‘beautiful fluffy toys at reasonable prices’ of (would you believe it?) long haired teddy bears, long haired rabbits, smurfs, spiders and dogs. Yes, I bet that struck fear into the hearts of Millwall players and supporters alike. If I ever find photos of said bargains, I’ll let you know.