3 Comments
By Goldstone Rapper Around The Goldstone, Media Coverage

The lads who gave Seagulls their name 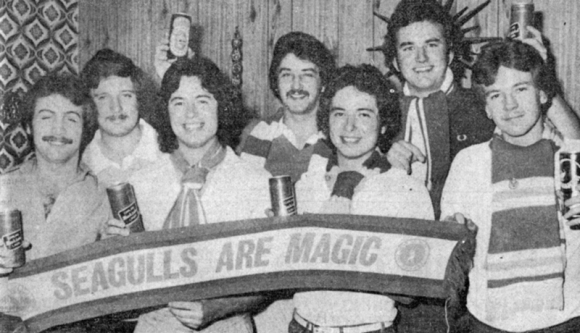 A brilliant story from the Argus ‘Division One Here We come’ supplement in 1979:

Albion are called the Seagulls because of Crystal Palace. The group who dubbed them the Seagulls begrudgingly give their arch-rivals a little credit. But we have traced the lads who thought up the name and, as the revelry over promotion continued, they explained how it all began.

The Seagulls were christened with liberal swiggings of beer on Christmas eve of 1975. Christmas festivities were in full swing in the Bosun pub in West Street, Brighton. A group of Albion fans were analysing their vocal failings after a visit to Crystal Palace and decided how to put things right. Said Jeff Wells of Bowring Way, Brighton: “At Selhurst Park the Palace supporters started chanting ‘Eagles’ and the volume was so loud that we could not sing anything louder than them.”

The cry Dolphins never roll easily off the frenzied lips of even the most ardent fan – even when your team was getting the better of Crystal Palace. The Albion have always tried to develop the seaside theme and in pre-war days were known as Shrimps. Many would suggest the nickname was rather appropriate: they were rather small fry and inclined to be gobbled up by the Football League’s big fish. Added to that, Gillingham were also known as the Shrimps, which complicated things. The re-named Dolphins was intended to develop the local link as the Brighton town crest has them, but it never had popular appeal.

Jeff Walls had the marine connection in mind at this Christmas booze up, when he queried: “What do you call those birds down the seafront?” His mate Lee Phillips chanted “Seagulls” and then the nickname was out. It soon spread around the pub, a favourite meeting place for fans. By February the terraces were picking it up and by the end of the season it caught on good and proper. The police had given a helping hand, as well. A crackdown on behaviour in the North Stand led to migration to other parts.

The chant of Seagulls had the Albion soaring to new heights… and it left Rob Pavey, now commercial manager with a Dolphin-sized headache. The fervour from the terraces had to be kept up with. Already one sports shop in Brighton was selling Seagull scarves. Said Ron: “We had a whole lot of stock with Dolphins on it and really all I could do was ditch it. Alan Mullery gave scarves and things like that to children’s homes and we concentrated on the Seagulls.”

Said Derek Chapman, one of the group who gave them the name: “We didn’t really mean to give Albion a nickname. All we were trying to do was have a go at Palace and find a chant that could drown their fans.”

Now, as they toast the Seagulls, with lager, and Newcastle Brown of course, they can admire the Seagull emblem which they helped put on Brian Horton’s jersey. Said Jeff’s mum: “I said at the time that maybe the new name would bring them good luck. Now look at them in Division One.”

Nowadays, Derek Chapman is a director at the club. Also, as mentioned before on this blog, despite what the article says, the club were never known as the Shrimps.

3 thoughts on “The lads who gave Seagulls their name”