The Brighton goalkeeper shirt of the late 1970s

Once I found a green Bukta jersey with black logo on eBay, there was no stopping me! I won the auction for a tenner in late July and then hatched plans to get the classic round Seagulls badge added – and hey presto! – I now have a replica of the goalkeeper top worn during the late 1970s. And yes, I appreciate the number of people for whom this has any sartorial interest is probably rather limited. 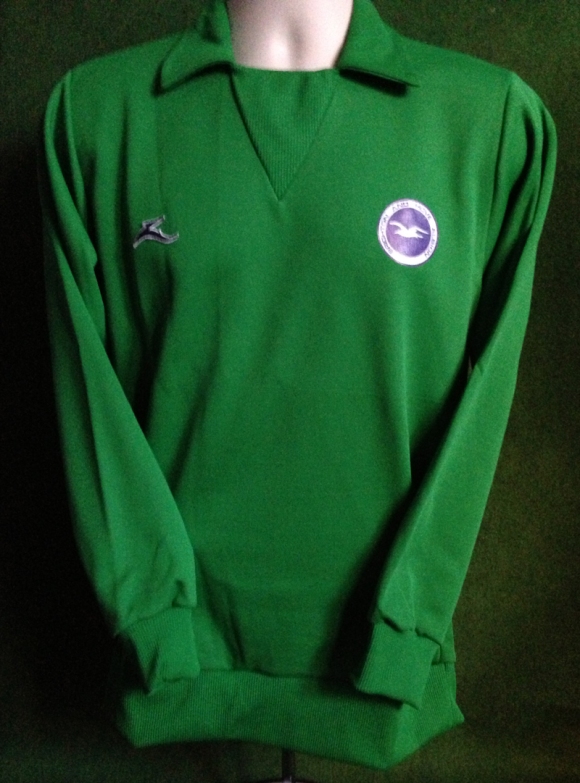 Sometimes, it featured both the Buk and logotype, as Graham Moseley ably demonstrates…

There was even a red version, for the times when Brighton played a team with green on their kit, such as Norwich City. The Old Football Shirts website includes the red goalkeeper’s top here.

Green or red, it would be a stretch to describe the goalkeeper’s shirt as a design classic. However, it’s undoubtedly associated with the good times at the Goldstone, so much so that there was even an Eric Steele poster in the centrefold in the Derby v Brighton programme of October 1986, with him proudly wearing his Albion clobber seven years on together while showing off John Vinicombe’s ‘Up, Up and Away’ book celebrating Brighton’s rise to Division One in 1979. You read it right – a Brighton poster in a Derby County programme! 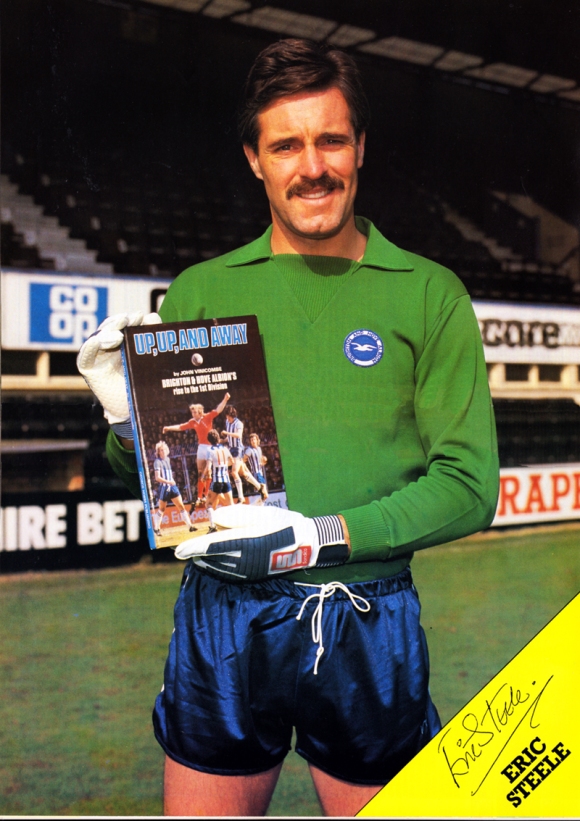 (Although those shorts look rather like the blue Bukta ones, they’re actually Derby’s of 1986/87).

Talking to Harry Brown, Steele is optimistic about Derby’s chances that season:

“Things are on the move here,” Eric says confidently. “It reminds me of my very happy stay at Brighton. I was part of the Seagulls set up from February 1976 till October 1979, when I moved on to Watford. In that time we moved from the Third to the First Division in three seasons, and I have very happy memories of the Goldstone and its fans. We packed them in up to 25,000 in fact, and I can see it all stirring again just like that here at the Baseball Ground.

Eric believes, as most of his team mates do, that Derby County can equal Brighton’s feat, and maybe even improve on it, by going from Third to First in two seasons. “I want to taste yet another Third to First Divsion success, and I believe it is ‘on.’ That’s why I stayed here to battle it out with Mark (Wallington).

Last May’s promotion here was the fifth in which Eric has been involved during his career – the two with Brighton; from the Fourth to the Third with Peterborough; and from the Second to the First with Watford. He reckons he will contribute to the sixth right here at the Baseball Ground.

He sees the same sort of individual flair emerging here as it did at the Goldstone when he was a Brighton player. “Then we had Mark Lawrenson, who has gone on to great things at Liverpool, Derby-born Peter Ward who was getting us goals galore, Welsh international Peter O’Sullivan, and Brian Horton, now the player-manager at Hull.”

Steele made it promotion number six when with Derby County who won the Second Division championship in 1986/87. He left for Southend at the end of that campaign. When he was loaned to Mansfield in March 1988, he made one last appearance at the Goldstone.

As for the Seagulls’ Bukta goalkeeper shirt, it officially gave way when Brighton switched to Adidas from the start of 1980/81. However, in the pre-season photo shoot for that campaign, the green Adidas shirt was clearly not yet ready and so an extra Albion badge had to be sewn on to conceal the Bukta logo, to create a rather bizarre look. That’s one retro Albion goalkeeper’s top I won’t be emulating!

Tony Knight, Graham Moseley and John Phillips with a seagull on each nipple