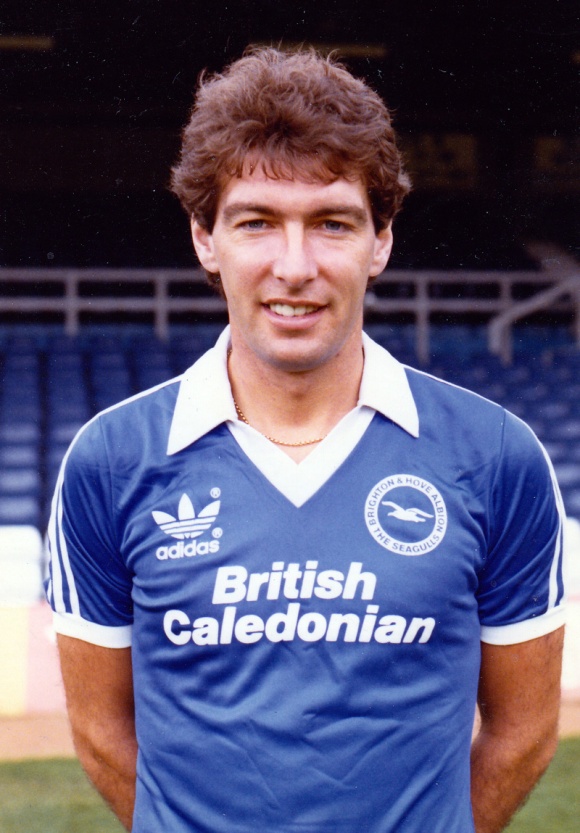 Having led his club to safety in Division One at the end of 1979/80, Alan Mullery went on an eye-watering spending spree as he sought to establish Brighton as a major force in the top flight. Together with Michael Robinson, Scotsman Gordon Smith ended up forming the striking partnership that took Brighton to the FA Cup Final in 1983.

However, when has bought, it wasn’t as an out-and-out centre-forward. Hence the comparison with the silky skills of subtle, creative English players:

Gordon Smith, Brighton’s £400,000 recruit from Rangers, was rather perturbed when some precocious, pressing journalist compared his midfield talents with those of England’s Trevor Brooking.

Here was a 25-year-old Scot, travelling south to play in the English League’s First Division without so much of a hint of a Scottish cap, receiving the full treatment from the media.

Smith flashed a smile and said wickedly: “Brooking? I’m no Trevor Brooking. He doesn’t have my pace!”
Gordon Smith has come to taste the good life in England with a talent and a diss-arming and essential sense of humour.

He treads the same path which has carried many young Scottish hopefuls south. Some, like Kenny Dalgllsh and West Ham’s Ray Stewart, stayed to fulfil the rich promise nurtured In the Scottish heathers, others never made the grade and returned to the homeland disillusioned.

Jim Bone went to Norwich and decided to use the second half of his return ticket shortly afterwards. Alfle Conn never made it at Spurs. Eamonn Bannon prefers to forget his Chelsea experience. Peter Marinello swept through the gates at Highbury more than a decade ago hailed as “the new George Best”. He failed to maintain the pace of his pre-publicity.

The difference between Gordon Smith and some of his predecessors is that the Rangers star has. harnessed a sense of humour to his abundance of elegant talents.

“I’ll be delighted to be thought of as Trevor Brooking,” says Smith, who has recently moved into a detached fourobedroomed house in Hove, Brighton, which would have cost him £20,000 less were he buying It north of the border.

“My game is different from Trevor’s: I like to run from deep positions, playing one-twos in the box in the hole or finding an opening which I can exploit.

“I’d say I am more like Martin Peters than Trevor. I love watching Peters. He relies on stealth and superb positioning.

“Like him, I am always looking for that blind side position which catches a defence unawares.” The player, whose simple name reveals nothing about his Scottish ancestry, confesses to knowing little about English football.

“1 would say that the Scottish Premier Division is more competitive than the English First Division if last season is any guideline.

“My main problem In the early weeks of the new season has been to adapt. My absolute priority is to make sure I keep my place in the Brighton team. It is all right commanding a big fee In the transfer market, but unless you fulfil the hopes of the club who have laid out that sum, you are useless.

“Forget me, think about others given an opportunity to make it in the big time. Mick Robinson, who left Preston for Manchester City, is a classic example.

“A good, honest, skilful, fast striker. His problem was he struggled In his first season, playing for a team struggling to survive in the First Division. People underestimate the demands of this game. A good player in a bad team can be terribly disappointingto men who have placed their confidence, and money, in his ability to dowell for them.” If the faithful who sing a chorus of “Seagulls” whenever they clamp eyes on a blue and white shirt expect the former Rangers player to combine construction with a demolition job helping out in defence they will be bitterly disappointed.

Smith is not a heavy tackler. He is a maker of goals who likes to get his name on the scoresheet as well. “Alan Mullery has told me that he wants me to get forward as much as possible this season. I am not a defensive marking player. I like to get into the box and get some goals. I am only 25 and hope to give Brighton the best years of my career. I reckon a player of my type doesn’t reach his peak until 28.”

Gordon Smith has a delightful penchant for coaching youngsters and maintains a ready ear for anyone wishing to exchange a technicality with him.

He wants to become a coach when he decides to quit the game in the latter half of the 1980s.

“Coaching is so important. People talk about becoming managers. Highly commendable – but the problem with British football is that the coaching has often been weak. British players often lack a lot of imagination. A great deal of natural ability is often coached out of them. How wonderful to see Van Moer, the Belgian, the Italian, and Rummenigge, West Germany’s cultured player.”

Smith has gained considerable experience against European opposition in several outstandIng years at Ibrox. He has played against PSV Eindhoven, Cologne and Juventus, gaining experience from those matches which should blend happily with Brighton’s line-up of experience and young talent.

He carries a firm ambition to win a full Scotland cap yet is realistic enough to realise that his style does not endear itself to the current managerial regime under Jock Stein.

“I think I would have to change my style to make the Scotland team,” he says. “The system does not allow for a player like me. They are often looking for two ball-winners In the middle of the pitch. I don’t win much ball. My strength is running off the ball into positions which can carry an attack forward. I like to attack and will take every opportunity to get forward. I don’t want to let Brighton down. I’m a good player, but will not find it easy fitting into the team pattern.

“Liverpool can afford to buy a player, stick him in the reserves, and allow him time to settle into their pattern of play. Brighton do not have the resources to do that. They want an early reward for their outlay.”

Fortunately, Gordon Smith has managed to settle down in the Brighton area within weeks of signing a contract. He and his charming wife, Marlene, have wasted no time moving their belongings to a £67,000 detached Georgian in Hove. Smith was determined to secure his home life down south, if only to provide a settled existence for their new-born baby Grant.

“I am determined to show he is also a good judge!”

Smith and Robinson both settled at Brighton very early into 1980/81, while Ritchie was a regular scorer at the turn of the calendar. Even so, that expensive frontline of Robinson and Ritchie, with Smith just behind, despite costing £1.4 million, was not enough to turn Brighton into a side that could finish into the top-half of Division One.

With falling Goldstone attendances, cuts had to be made. Chairman Mike Bamber sought to slash the coaching staff wage bill and a cash-only sale of Mark Lawrenson. It led to the departure of Alan Mullery, to be replaced by Mike Bailey. However, Smith did not hold Mullery’s successor in the same esteem, particularly as the new boss seemed to regard the Scotsman as a luxury player that did not add much to the rigid system he sought to develop for the side. Loaned to Rangers in 1982/83, Smith seemed to be on his way out until the Jimmy Melia era restored his place within the starting line-up, in time for the FA Cup Final…