Midfielder John Ruggiero made only a handful of appearances for Brighton (eight in the League, and four in the League Cup) in the 1977/78 campaign. However, he managed to get featured in Brighton v Tottenham’s matchday programme in April 1978: 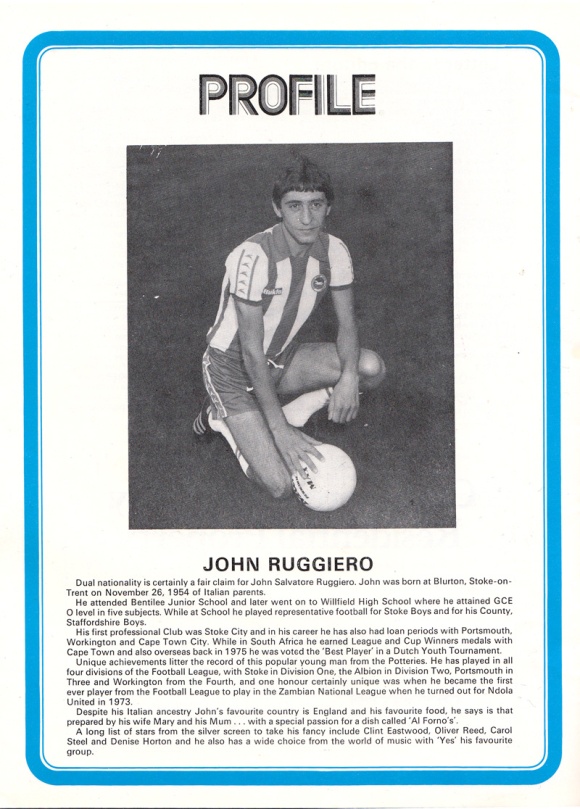 While his time with the Albion was brief, he expressed warmth for those days, on Facebook last week:

Loved my short time in Brighton. Would have liked to have played a few more games but still love the place and the team were buzzing at that time.

And to answer a question that has remained unanswered for many Seagulls fans of the 1970s, this son of Italian parents explained that his surname is pronounced ‘roo jerr oh’. So now you know!

When I read him some of what is said of him from this profile, and wondered whether he was still a fan of Clint Eastwood and Oliver Reed, and the group Yes, he clarified some of the factoids within the profile:

Al Forno was a restaurant in Brighton. We would all go in there on a Friday afternoon after training and have pasta and wine. Yes, that was the secret of Brighton’s success! Carol and Denise were wives of Eric and Brian, who were my best mates.

Interesting that he has short back and sides in the photo here as others of him featured a moustache and bubble perm. He certainly kept people guessing with his look in those days, and quips:

Most footballers are in love with themselves. I suppose it was the same in my day!