Leave a comment
By Goldstone Rapper Around The Goldstone, Club Colours, Photo Opportunities

Here is Peter O’Sullivan in a rare Bukta-branded shirt from the end of the 1976/77 season. This blog featured this shirt in a previous post a few months ago.

Sporting a Rivelino-moustache, he truly looked the part on the cover of his testimonial programme at the end of the 1979/80 season:

Inside, an advert for the Seagull Line wished him well:

The editorial was by Tony Millard who paid tribute to Sully:

These days very few footballers spend ten years at one club and when Peter O’Sullivan recently completed 400 League games in Albion colours it was certainly quite an achievement.

When, on April 20, 1970 the youngster with the ‘Beatle’ style haircut came to the Goldstone from Manchester United not many would have thought that 10 years hence he would still be turning out and still wearing the number ’11’ shirt.

In fact, when Peter made that 400th appearance he had never been chosen as substitute but since then he has worn ’12’, for the first time, at Derby 10 days ago.

When he first came to the Goldstone the little Welshman with the Lancashire accent was an orthodox winger. As the game has changed and patterns of play have altered he has become a midfield player and he has been chosen once for Wales as a full cap, that against Scotland in May 1976 while he has also twice come on as a substitute in a full international, against Scotland in 1973 and against Malta just under a year ago.

Peter has played for the Albion in Three Divisions of the Football League. When he came to the club the side was in the Third Division and Peter was in the promoted side in 1972. Unfortunately, after just one season it was down again to Division Three and there they remained until the current ‘Alan Mullery era’.

Promotion from Three to Two in May 1977 was followed by disappointment a year later when the team just failed to gain promotion to One on goal difference. Ironically it was the failure of tonight’s opponents Southampton to beat Tottenham Hotspur at the Dell that meant that ‘Sully” and his colleagues were destined to have another season in the Second Division.

However Peter’s ambitions, and those of many more were finally fulfilled just under twelve months ago on that marvellous day at Newcastle. Ambitions that seemed to have been ended with his release from Manchester United were, nearly 10 years on, finally to be realised.

On October 9 last year Peter ran out at Old Trafford in front of 52,000 fans and he knew that he’d finally made it. Although, at that time, Albion were struggling in the League; Peter has now played quite a part, hopefully in ensuring the Club’s future.

As the programme continued:

During the year a number of benefit functions have been organised for Peter and the Committee of ‘Friends of Sussex Football’, the benefit organisers, have worked hard to make it a successful year.

One of the functions held recently was a businessman’s lunch at the ‘Sussex Pad’ in Lancing where landlord, Wally Pack and friends provided a marvellous spread. Our picture shows Sully helping Wally and his staff with the carving. 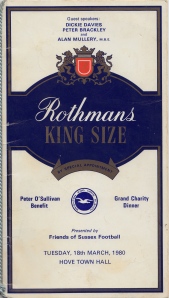 At the Grand Charity dinner in March 1980, with guest speakers Dickie Davies, Peter Brackley and Alan Mullery, the dinner guests enjoyed the delights of asparagus mousse with smoked turkey as a starter.

This was followed by grilled trout with almonds, and then roast contra fillet of beef, sauce madeira, garden peas with bacon and parmentine potatoes.

Desert was pineapple cheesecake with fruit salad, and then petit fours and coffee.

As for the benefit match itself, a month later, Lawrie McMenemy’s Southampton won 3-1. Albion fans had the curious experience of seeing manager Alan Mullery score the Seagulls’ consolation from the penalty spot: