In a sensational bid to improve their chances of reaching the First Division, Albion are bringing Oblitas to Brighton and he will play in a friendly match the club are trying to arrange at the Goldstone on Monday.

Accompanying Oblitas is striker Percy Rojas, who also played when Peru reached the World Cup quarter-finals last year in Argentina, and the president of the Sporting Crystal Club, Lima.

Albion have paid the Peruvians’ air fares and they are expected to arrive tomorrow.

Oblitas, “the many who catches pigeons” , was voted the best winger in the World Cup. I understand the fee would be around the £200,000 mark and Albion have plans to split the cost by arranging a deal that would take the Peruvian to San Diego Sockers in the summer.

This is the club Brighton are to play in June at the end of their Californian five-match tour.

If Oblitas joins Albion he will need a work permit, but chairman Mike Bamber foresees no difficulties. The San Diego side of the deal will be discussed when Bamber and manager Alan Mullery go to California early next week.

Reports linking the Peruvians with Nottingham Forest drew this comment with Bamber: “I have no idea if Oblitas is going to see Brian Clough. All I know is that we have been promised first choice.”

The skills of Oblitas were just one of the many exciting facets on TV from Argentina in the summer. He was particularly devastating when Peru beat Scotland 3-1.

Unfortunately, the Peruvian pair did not arrive on the Friday as expected as a misunderstanding caused them to believe they were expected to play in a friendly against Nottingham Forest on the forthcoming Monday. As Alan Mullery said:

“They haven’t trained for a couple of weeks and weren’t keen to play against Forest. But we were never going to play Forest on Monday.”

Eddie Buckley, the agent responsible for Ardiles and Villa at Spurs, flew to South America to try to clear up the confusion, as well as investigate reports that tax formalities were causing a hold-up. The delay caused the proposed practice game with Brentford to be called off. 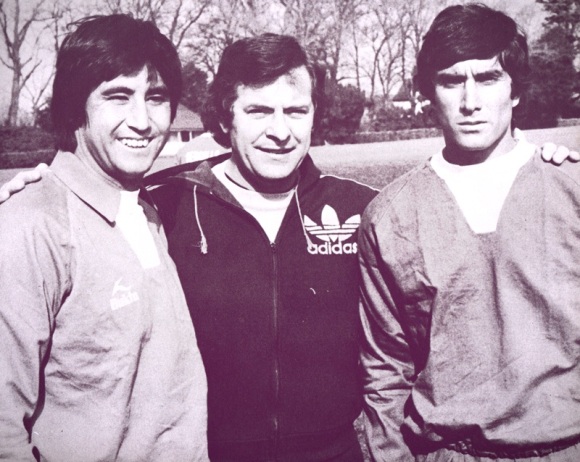 However, Percy Rojas (above, left) and Juan Carlos Oblitas did eventually arrive in Brighton for a spot of training, both finding the weather and training conditions just a little difficult. Alan Mullery said:

“Neither of them looked very fit. But they haven’t played for nine weeks so we can make excuses for them.”

It was reported that both players would be at Craven Cottage on 24th February to watch their prospective new club play Fulham. The news coincided with the decision by the Football League to extend the 8th March transfer deadline by three weeks, which gave Brighton much needed breathing space in trying to gain work permits.

Incredibly, the two World Cup stars eventually played for Brighton in… wait for it!… Hove Greyhound Stadium. In a piece in the Daily Express: 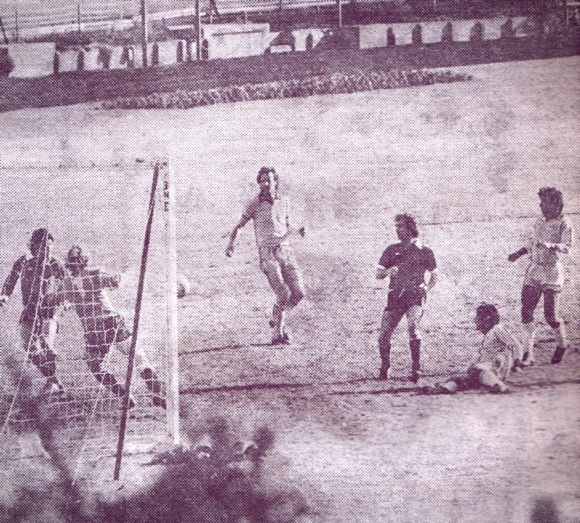 Off the beaten track – Brighton give trials to the Peruvian pair

An hour before kick-off club officials were still denying that any game was to be played.

But it was known that Brighton manager Alan Mullery had arranged for Alex Stock to bring Bournemouth for a work-out. Brighton played 28-year-old winger Oblitas, who was the more impressive, and striker Rojas throughout. Rojas and Peter Ward scored in a 2-2 draw, cancelling out two goals from Ted MacDougall.

The Peruvians have a £400,000 price range and Brighton may make a decision today to start negotiations.

An overly hasty report in the paper then stated:

Peruvian World Cup winger Juan Carlos Oblitas signed for Brighton last night in a two-way £190,00 deal with Tampa Bay Rowdies. But the 28-year-old who helped show Scotland the door in Argentina will first play in the United States before joining Brighton in the autumn ready for the new season. The other Peruvian, Percy Rojas, is unlikely to join Brighton though he still hopes to find an English club in time for next season.

However, the reality was that no deal had been done. Gordon Jago, manager of the Rowdies, had Oblitas on trial but withdrew interest once the North American League season started. There were already gathering snags for Brighton, such as establishing the true age of Oblitas, the lack of availability of either player for the current season, not to mention all the issues regarding obtaining work permits and the language barrier. Without a partner club to bid, though, the deal for either player was dead.

Update: Both Juan Carlos Oblitas and Percy Rojas have now been added as honorary Brighton players by Cult Zeros. Click on a player’s name to order a T-shirt or hoodie of your favourite Peruvian superstar.

2 thoughts on “The Peruvian connection”