Leave a comment
By Goldstone Rapper Around The Goldstone, Club Colours, Media Coverage

Fix your eyes on this Albion pennant from the Football Pictorial Pennant Collection, cut out from the magazine. Yes, it’s a cheapo paper one and it doesn’t come with any tassels:

It does, however, include the official badge. Featured most prominently on the ‘blue Arsenal’ kit from 1964 (and indeed, a few jersey designs before), this crest was dropped from the shirts in the Pat Saward era from summer 1970, in favour of B&H AFC calligraphic lettering. Nevertheless, the badge made it onto this unofficial pennant (above) and continued to be used to some extent until about 1974. As Football League Review described: 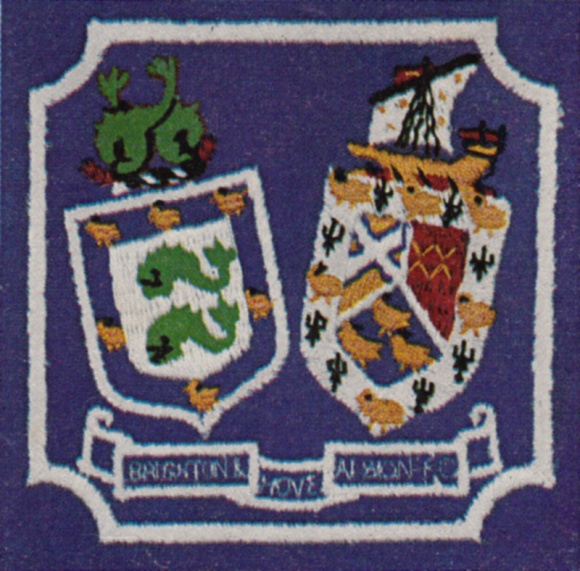 The club’s official badge features the arms of Brighton and Hove, set against the club colours of blue and white, The Brighton arms feature two dolphins surrounded by the six gold martlets of Sussex. Above the shield, a further pair of dolphins divided by two branches of coral refer to the sea and the South Coast climate. Hove’s arms also feature the County martlets. The ship at the top of the Arms represents a 16th Century French Galley, commemorating French attacks on the Hove coast.

At the time, the club also had this metal lapel badge, on sale to the public, price 3/6:

This particular crest was used on the matchday programme throughout the 1970/71 season. It took four more seasons before the club moved beyond the whole ‘coat of arms of the local boroughs’ paradigm and came up with the much simpler, cleaner Dolphin design for the first season under Peter Taylor. However, even this new badge didn’t feature on the club shirt.

Only in 1977/78 did a badge return to the club shirts. By then, we were, unmistakably, the Seagulls.