3 Comments
By Goldstone Rapper Around The Goldstone, Media Coverage

A mouth-watering pre-season programme in the summer of 1985 saw First Division giants Arsenal, Liverpool and Nottingham Forest make the journey to the South Coast.

With the help of some Panini stickers from ‘Football 86’, I will let the words of Tony Millard from the Brighton v Grimsby programme from 1985/86 give you a sense of how Second Division Brighton fared against the big boys:

The first home game was against Arsenal on Friday August 2. A full-strength Gunners side came to the Goldstone, and among their substitutes was Martin Keown who is now back at the Goldstone on loan. Albion played with the wind and rain behind them in the first-half, and took the lead with a cracking goal from Dennis Mortimer. The former Villa man certainly looked the part when he gave John Lukic no chance in the Arsenal goal.

A defensive slip that saw Graham Moseley stranded gave Paul Mariner a simple chance to put Arsenal level, and a header from Stewart Robson provided the winner for the Londoners after the interval. They might have netted a third, but Charlie Nicholas missed from the spot after Eric Young had been penalised. 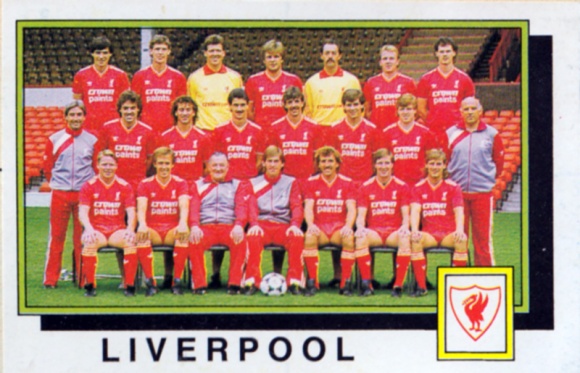 The biggest pre-season crowd turned out for the game with Liverpool on Monday, August 5. With new manager Kenny Dalglish also in action as a player, it was a full strength Liverpool side that was looking for revenge against the club that had, twice in three seasons, knocked them out of the FA Cup.

It took Liverpool just seven minutes to take the lead, with Dalglish playing a 1-2 with the Dane Jan Molby, before slotting home from some eight yards. Molby was also involved in the second goal. A precision pass set Steve Nicol away on the right, and he made no mistake. Before the interval it was perhaps predictable that Ian Rush would find the net. Dalglish took advantage of defensive hesitation, Rush showed typical perception and nodded in from only two yards out to score a third for Liverpool.

The fourth too came from Rush, once again Dalglish was the architect, and the Welsh striker found space-a-plenty in the Albion area.

Albion scored a late goal through Steve Jacobs, by now pushing forward in midfield, but by then Liverpool had shown that they will once again be among the best this season.

Albion reserved their best for last Friday at the Goldstone when they walloped First Division Nottingham Forest 5-2. The match was a real thriller for the fans, and no one except perhaps for Brian Clough and his team, went home unhappy.

Justin Fashanu had an outstanding game against his former team mates. Enforced changes had to be made in Albion’s side. Christ Cattlin had signed 22 year-old defender Gavin Oliver on loan from Sheffield Wednesday. He filled the number five shirt.

Albion took the lead when a short corner gave Mortimer the chance to cross from the right and Biley headed in. That provided the only goal of the first-half.

The second 45 minutes was a real thriller. Steve Hodge put Forest level after the Albion defence had been caught napping. Albion were soon back in front when Steve Jacobs crashed the ball in, after Fashanu had nodded on a right-wing corner. The joy was short-lived when an error by Perry Digweed presented Nigel Clough with a ‘sitter’.

The finale from Albion surely left the Goldstone regulars with an appetite for more. First Martin Keown pushed forward. His run produced a corner which Mortimer floated in, Fashanu’s header caused havoc and Dean Saunders provided the finishing touch.

Danny Wilson grabbed the goal he certainly deserve when Fashanu again provided an important touch, not to mention distraction to the visiting defence, and the final goal came from just about the most powerful shot seen at the Goldstone for years. Fashanu connected from 15 years out. Segers could only parry the ball, and O’Reilly tapped it over the line.

While Chris Cattlin gave his team guarded praise in the press room after the match, Brian Clough declined to be interviewed. The praise from Cattlin was well justified, and the performance of his team has surely whetted the appetite of supporters, to kindle that feeling of anticipation of an enjoyable and productive season ahead.