Ryan lords it over Fulham

A photo of star-striker Peter Ward against Fulham in 1978/79 was featured in Roy of the Rovers magazine: 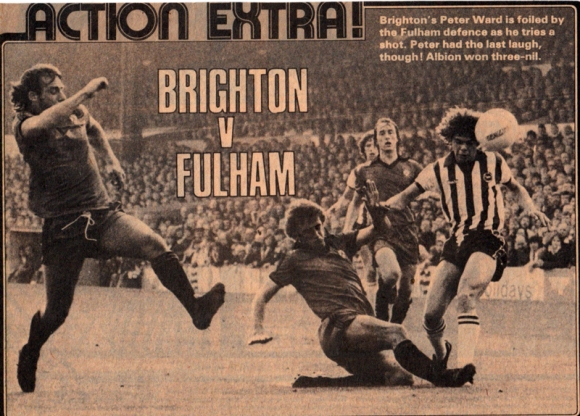 However, it was Gerry Ryan that stole the headlines in October 1978 as the Seagulls won 3-0 at the Goldstone. Here is the match report by Tony Roche of the Sunday Mirror:

Before the destruction, manager Alan Mullery made his Albion men sit through a film of their hammering last week at Crystal Palace.

Fulham, with 12 points from their previous seven games, paraded their new signing £80,000 John Beck from Coventry. But it wasn’t their day.

Mullery said: “I made the lads watch the whole 90 minutes of last week’s match. And they saw their own shortcomings. Fulham suffered as a result and for me and Teddy Maybank, it is always nice to beat your old team.”

The first half riddled with frustrating back-passes, narrowly went to Brighton.

In front of a shirt-sleeved crowd, Brighton weathered Fulham’s early assaults and slowly got a grip in midfield where man-of-the-match Brian Horton dominated.

Fulham seem capable of absorbing the pressure until an 18th minute moment of indecision by Peyton.

Horton’s right-wing throw bounced in the box and as Peyton hesitated, Ryan hooked the ball into the empty net.

Evans (dissent) and Beck (foul) were booked in the space of six minutes, shortly after the goal.

Fulham rallied in the second half and Graham Moseley did well to hold a powerful Gale header at full stretch.

But once again lose concentration cost Fulham dear. Evans fouled Ward and as Rollings curled in the free-kick, Horton burst between Gale and Money to bullet header wide of Peyton.

Fulham had their chances – both falling to Davies. He did well to create space only to shoot wide.

Horton reserved the best for last, whipping through a glorious ball in the 90th minute to release Ryan on the right.

The Irishman sprinted into the area, seemed to take too long as he sidestepped defenders then coolly found Peyton’s bottom right-hand corner.

The day’s big duel was between Rollings and Guthrie. Rollings came out on top to help Brighton reach fourth spot in the Second Division.

Ryan’s goals seemed to give Albion a more immediate return for their £80,000 spending than Fulham had for gaining John Beck for the same figure. The Seagulls signing had scored in the previous month in the 5-1 slaughtering of Preston North End. By the end of the season, the Irish winger and midfielder had amassed 35 League appearances for his new side, scoring nine goals including the final one in the famous fixture at Newcastle.

From this point on, Gerry Ryan developed a habit of getting notable goals in encounters with the best sides, such as the only goal in the famous victory against Nottingham Forest at the City Ground in November 1979, the winner against Arsenal in September 1983, not to mention those FA Cup goals against Liverpool in February 1983 and January 1984.