Having your own van must have been a big deal in the 1970s. The Endeavour Motor Company of Brighton kindly provided the Albion with a transit van for the Seagull Lottery. Here you can see Commercial Manager Ron Pavey and skipper Brian Horton taking delivery of the vehicle in 1978: 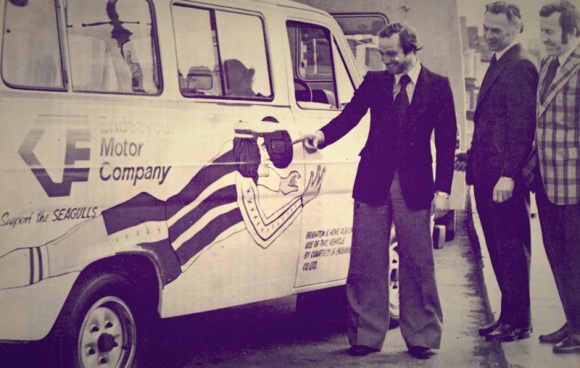 A year later, Caffyns got in on the act.

As the Brighton v Cambridge match programme puts it:

During the next week or so Albion fans will have a chance to see vans in Seagulls’ colours around the area as a result of the generosity of Caffyns. Our local British Leyland dealers have supplied the club with two minivans for use by the lottery staff who cover many miles distributing tickets which help to keep finances straight.

Caffyns have also supplied cars for manager Alan Mullery and for Peter Ward and it is these two who took delivery last week of the vans at the ground.

The manager and striker are seen in the picture together in the sunshine with Caffyns Group Commercial Venture Sales Manager Steve Hoy.

Seems a little unfair, if you ask me. If you were in the Albion first team at the time and not a pint-sized striker with a bubble perm, you’d be quite within your rights to ask why you weren’t getting your own car too. Hopefully, the other Brighton players protested. And if they did, it wouldn’t have been the first time that British Leyland was associated with industrial strife in the 1970s!

One thought on “Van-ity Fair!”