Super Ted shoots through the air

Having been taught a lesson by Arsenal, winners by four goals to nil at the Goldstone Ground on 18th August 1979, the Seagulls arrived at Villa Park four days later on a Wednesday evening hoping to kickstart their season. They lost 2-1 but, as Alan Williams reports, at least they got off the mark in one respect: 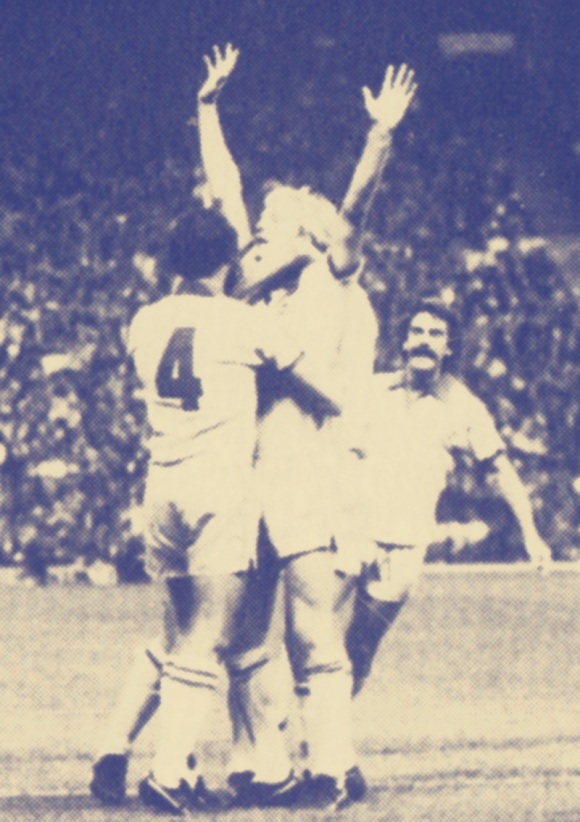 The inability to convert half chances stopped them giving Villa a real fright. They are a long way from starting to (justify) their hard-earned promotion. But it was clearly more satisfying than their embarrassing home defeat by Arsenal on Saturday. They can gain hope because they were able to create several openings. And no one worked harder than Maybank who had been a doubtful starter during the afternoon because of shin trouble.

Villa were still without their transfer listed stars Andy Gray an John Gidman. In addition Dennis Mortimer was unable to play because of a leg injury and his deputy Alex Cropley had to go off with a jarred ankle after only eight minutes.

Villa’s experience gave them long spells in command. They took the lead in the 14th minute when Mark Lawrenson lunged at Brian Little’s ankles on the edge of the penalty area. It was a border-line decision but I thought a penalty was fair and Allan Evans converted.

But 10 seconds before half-time, John Gregory, former Villa defender, broke away on the right and pushed the ball through.

Maybank turned quickly and fired a shot from the acutest of angles which spun into the net off Jimmy Rimmer’s fingers.

Brighton then needed a goal early in the second half and the hard-working Brian Horton raised their hopes with a header against the post.

But Villa proved the more resourceful and the winner came in the 66th minute. Little made a run but was fouled, this time by Andy Rollings a few yards outside the penalty area.

Cowans touched the ball a couple of yards for Tony Morley to cap an impressive first home appearance with a drive wide of Eric Steele.

Maybank followed up with a goal on Saturday three days later at Manchester City but Ted’s picnic was spoilt by the 3-2 defeat and a tongue-lashing by Mullery about his team’s play. While that was a hat-trick of losses for the Albion in three top flight matches, could the goals of the striker eventually turn the season around? Sadly, no more League goals followed for Ted, and he was dropped in favour of new signing Ray Clarke in November, who formed a remarkably effective striking partnership with Peter Ward until the end of the season.

Maybank fell out with Mullery and was sold back to Fulham. But he’ll always have his achievement at Villa Park to look back at.