Leave a comment
Around The Goldstone, Media Coverage, Photo Opportunities 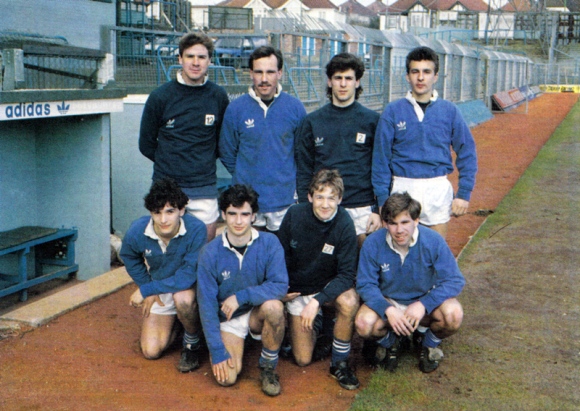 A splendid piece by Tony Norman that made it into the Brighton v Oldham programme of April 1986:

Doing an interview with Albion’s squad of young apprentices is anything but dull! With their youth, humour and obvious love of life, they are a very likeable team. Even after a tough training session, they are eager to talk about life at their new home… the Goldstone.

Apprentices have two years to prove themselves and managers always say that the most heartbreaking part of their job is having to tell a youngster that he simply does not have the skill to make the grade. But Albion’s AP take the rules of the game with a cheery acceptance.

‘It is important to keep a positive attitude,’ says young Barry Smith. “You do think about what will happen at the end of your apprenticeship, but the best thing is just to work hard and do your best to improve as a player.’

Professional football is an exciting career, but there is very little glamour in an apprentice’s everyday routine. This involves arriving at the ground at nine in the morning and cleaning the boots, and preparing for training. The lads are coached by George Aitken, who has helped Chris Cattlin to develop the strength of this club in many areas of youth football.

After the training, the AP’s return to the Goldstone, where they clean the boots and footballs, and do any necessary work around the dressing room area, before leaving at approximately 1.30pm. On home match days, all the boys come to the game and four of them work to hep the backroom team in any way they can.

The youngsters play in the South East Counties League, where they are guided by John Shepherd and Mick Fogden. The next step is a place in the Reserves and then comes the big step into first team football. Albion have nine apprentices and although they will not all make the grade with the club, it is obvious that they are thoroughly enjoying their time with the Seagulls. All the lads pay tribute to the help their families have given them in getting to this point, As for the future, our best wishes go with them all.

David Gipp is 16 and comes from London He plays upfront and likes to relax by watching television. David is a fan ofthe soaps with Dallas and EastEnders rating a special mention.

Paul Dobinson is another Londoner. He joined the club a year ago and likes to play in midfield, Like most of the APs, Paul enjoys listening to soul music by artists like Luther Vandross.

Full-back Terry Spinks is another soul fan. Terry 17 is also half-way through his apprenticeship.

Danny Carter and Phil Lovell are the ether two Londoners. Danny 16, enjoys eating out and Phil, 17, is known as The Pie Man because he’s so fond of steak and kidney pie! AI the London lads have been found digs locally by the club and they say they are very happy with their respective host families.

Barry Smith, 17, Franco Massimo, 17, and Daren Newman, 17, are all from Sussex. Barry lives in Brighton and in the summer is a very useful all-rounder for Portslade Cricket Club. Daren hails from Newhaven and he loves heavy metal music, an interest he shares with his brother Paul. Franco Massimo is a Sussex sprint champion and he says his ambition is to make his hometown of Horsham famous!

Unfortunately, when I met the AP’s, Trevor Wood, 17, from Jersey, was out with a broken arm. But when the talented young ‘keeper is fit and well, he enjoys a round of golf. Quieter moments are spent listening to his collection of Dire Straits albums.

So that’s the Albion’s apprentice team. Let’s hope we see some of those names in our first team programme in the years to come.

After a few outings as an unused substitute, Daren Newman eventually made his debut in the number 5 shirt in the 2-0 home defeat to lowly Shrewsbury later that month. Coming off the bench was Franco Massimo, another debutant. While Newman made no more Albion appearances, Massimo made another substitute appearance the following season. And that was it for his Brighton career.

Perhaps the biggest hopes lay with striker David Gipp, who was finding goals easy to come by in the reserves. Surprisingly, it took until the tail end of 1986/87 for the Essex-born man to make his Seagulls debut, away at Blackburn as a sub. He almost scored with his first touch. However, after just three appearances in 1987/88 and was released in July 1989, dashing the dreams of another young Albion player.