McNab aims to end his jinx 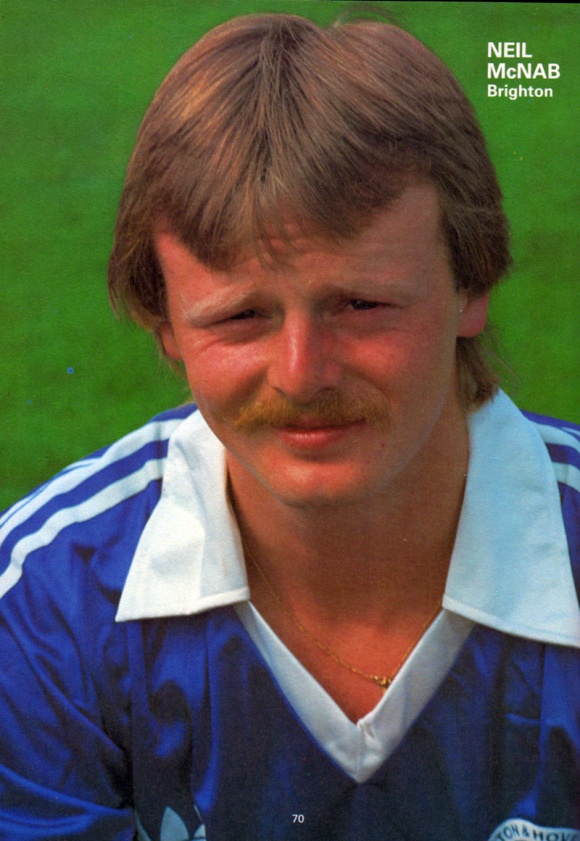 From Shoot! magazine before Brighton’s clash with Tottenham on 31st January 1981:

Although Neil McNab will have no mixed feelings about the outcome of Spurs’ visit to the Goldstone; he warns his former colleagues that despite Brighton’s lowly League position they will certainly not prove to be easy meat.

“On our day we can beat anybody, as we’ve proved by taking both points off Ipswich and Aston Villa this season.

“Much will depend on how we play, but if we can reproduce the form we showed after Christmas I see no reason why we shouldn’t win,” McNab predicted.

But whatever the result McNab determined to end the jinx which has haunted him since he left White Hart Lane to join Boiton before moving to the South Coast.

“I’ve never played well against Spurs either for Bolton or for Brighton,” McNeb reflected.

“I can’t explain it other than to say that I know I can do well against them and feel that in the past I have probably been trying too hard to prove it.

“To me it’s always a strange feeling playing against old friends, which is probably another reason for my disappointing performances, but I’ll be treating it as another game and will be going flat out to help Brighton win.” McNab is only too aware of how vital it is for Brighton to take both points on Saturday in their struggle to avoid relegation to the Second Division.

“We showed what we could do when we played them up there in the early part of the season by getting a point, which was a good result for us as Spurs are one of the best attacking sides in the country.

“Hoddle and Ardiles were on song for them that day but Gordon Smith played very well for us.

“Our League position is very false as we’ve got far too many good players to be near the bottom, which is why I am certain that there is no way we’ll be going down,” McNab commented.

McNab is also confident that Saturday’s match will continue his club’s revival, which started when they took maximum points from their three matches over the Christmas period.

“Those results certainly made up for the times when we’ve been unlucky and lost though not playing badly.

“I think it takes up to Christmas for struggling clubs to realise they could be in a lower division the following season,” McNab said.

McNab is also certain that a Brighton victory on Saturday will help compensate the fans for the disappointment of losing to Manchester United twice in the same week earlier last month.

“Those results were very frustrating – especially as we should have won that first Cup-tie and then we played our best game against them the following week and were still beaten.

McNab commented: “While it’s nice to have a run in the Cup and continue the winning habit, I’d rather play against the elite every week rather than winning the Cup and finding myself playing in Oivision Two the next season.

“Certainly I’ve become a much better player since I left Spurs. I don’t feel that I’ve got a point to prove on Saturday, but I would love to do well against them for once as it is sure to be a hard fought game in front of a big crowd.”

While the Scottish midfielder was hoping for a change in fortune against Tottenham, it did not materialise as Brighton left the field defeated by their more illustrious counterparts:

The scoreline was part of a curious spell when the Seagulls leaked two goals in eight consecutive matches from December 1980. Unsurprisingly, five of those matches were lost.

It took until the following season, 1981/82, when McNab finally got the better of his former team mates. Helped by a considerably tightened defence, Michael Robinson’s goal secured a Seagulls victory at White Hart Lane for the very first time.