With Brighton visiting Queens Park Rangers tomorrow night, it’s time to revisit the career of footballer who played for both clubs:

There was an average of two and a half million people unemployed in the UK in 1981. Don Shanks, a very experienced and stylish right-back, was one of them. He had played his part in the celebrated QPR side that finished runners-up in Division One in 1975/76, but now had fallen on harder times. Instead of signing for the DHSS, he arrived at the Goldstone Ground in 1981/82, proving a worthy successor to John Gregory who had joined the Loftus Road club. Shoot! magazine reports:

Don Shanks risked four months without pay and the threat of the dole to regain First Division football. At 28, the former Q.P.R. defender gambled for high stakes by cancelling his contract by mutual consent, and getting, in exchange, a free transfer from the West London club. When he quit, Shanks still had two years to run on his present contract.

Shanks’ risky move came about because Rangers rejected his claims for a loyalty bonus and better contract. I had been there over seven years and believed I should have been rewarded,” said Shanks. “They wouldn’t agree but they offered me a free transfer. I had to take the chance as well, by agreeing to have my contract cancelled.”

What followed was a hair-raising time for the player. “Going four months without any wages isn’t easy, as far as I’m concerned,” said Shanks. “I wondered whether I was as useful a player as I’d thought, when no one came in for me. Suddenly, you begin to doubt your own ability.”

But then came one offer, from Brighton. Yet Shanks’ problems were by no means at an end. He went on pre-season tour with the club to Holland, yet things didn’t work out well even though Shanks played fairly well.

“Then Millwall invited me to play a couple of games for them and offered me a contract. But, in the meantime, Brighton sold Lawrenson so on the day I was going to sign for Millwall and Third Division football, Brighton came in end offered me a one-year contract. It was disappointing for Millwall, but for me it was a shot in the arm.

“Getting First Division football again was tremendous and made all those agonising summer months worthwhile.

“When I was without a club and had no job, I suppose I was being proved wrong by what I did at Rangers. But now, I believe my decision was the correct one.”

Now, Shanks has this season to impress Brighton and particularly manager Mike Bailey sufficiently to earn a !onger contract, by next June. It’s up to me and I believe I can persuade them I’m good enough,” he says. “We didn’t make a great start to the season but we have a good side here, and I think we will improve.” 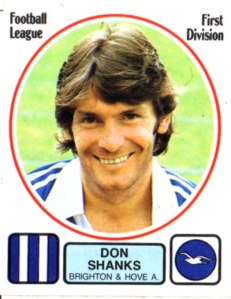 Shanks says he hasn’t found it that difficult to switch from the Second Division to the First. “The main difference is that you have to be positive here. If you decide to go for a ball, you have to commit yourself totally so that you make sure you get it,” he says. “I know one thing – the atmosphere helps. It’s marvellous to be back in Division One because it is another world. You have to be on top of your game all the time.

“My future is very much in my hands. If I play well and impress the management and the club does reasonably well, I hope I can win a longer contract. It is a trial period for me and I would have like to have signed a longer contract.

“But I gambled coming here. But I have confidence in my own ability and that is the most important factor.”

Brighton manager Mike Bailey is delighted with his new partnership of Shanks and Jimmy Case down the right hand side.

“I can’t see us being taken apart down the right,” he says. “Jim is a strong tackler as well as a good passer, a player who never knows he’s beaten.

“He has something to prove and I think he’ll do it.”

Brighton have made a reasonably solid, if unspectacular start to the season, but Bailey is happy.

“The new lads have settled in well and I can feel a nice atmosphere building up at the club.” The First Division must seem  long way from the dole queue for Don Shanks.

Shanks won over the Seagulls’ fans with some excellent displays in 1981/82, as he made 42 appearances in all competitions. Not only did he strengthen the defence, he is fondly remembered for his two late forays down the right-flank which precipitated a grandstand finish against Liverpool in October 1981, with Brighton drawing level after being 3-1 down at the Goldstone Ground.

He did win an extension to his contract, playing twelve matches at the start of the 1982/83. However, the former Luton and QPR man lost his place in favour of the far less experienced Chris Ramsey when boss Mike Bailey was replaced in December 1982. Shanks then had spells with Eastern club in Hong Kong and Wimbledon.