Just like FKS by the early 1980s, Topps was on the decline. The chewing gum firm’s garish bubblegum cards were a big part of many childhood memories from the 1970s, but its position was now under increasing threat. It was certainly slow get in on the sticker market that Panini was sewing up. In addition, perhaps Topps had also over-stretched itself trying to cover the whole of the Football League rather than focus on the more lucrative First Division. For instance, in 1978/79, it had rather delightfully issued eight playing card-sized ones for Brighton & Hove Albion, who were still a Second Division side. Although, for that, I will always retain a soft spot for Topps!

Fast-forward three seasons, and perhaps to counter the threat from Panini, Topps issued an actual album that you could glue on your cards. Here is the eye-catching cover: 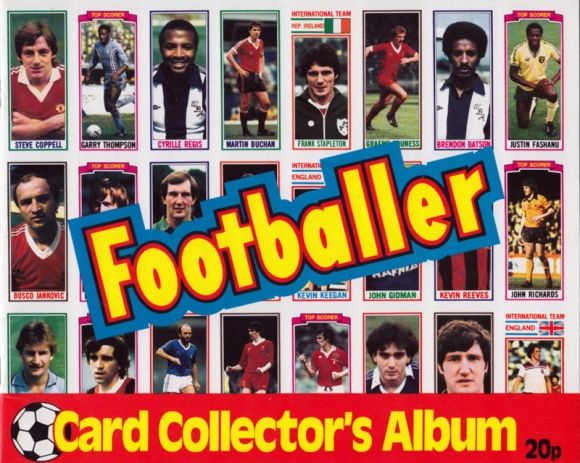 As you can see, all cards were now shrunk to cigarette card size. If you were a supporter of Arsenal, champions Aston Villa, Ipswich, Liverpool or Manchester United, you were given a full page of eleven player cards of your favourite side to stick in.

Disappointingly, as Brighton who were one of the smaller fish in the top flight, the Seagulls were only allocated three cards, and had to share their page with the ‘other Albion’, West Brom: 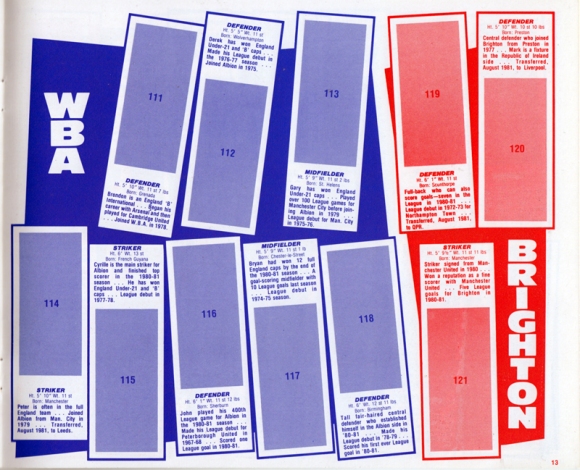 But spare a thought for Norwich City, who were only issued with one card, of Justin Fashanu! (Actually, they were issued with another, on a 1980/81 top scorers page of all the top flight clubs. And yes, that was also Justin Fashanu!)

As for the actual cards, themselves, the cardboard quality was quite poor (think cereal box card) and the borders often uneven. Here are the Brighton ones. Gregory and Lawrenson both left the Albion before the season, but here they are along with Michael Robinson’s from the aforementioned 1980-81 top scorer page: